UNHCR/Hector Perez
In Cox’s Bazar, Bangladesh, UNHCR Goodwill Ambassador Cate Blanchett meets 28-year-old Jhura who fled Myanmar with her two children when her village was attacked six months ago. She was separated from her husband and fears he was killed.
21 March 2018
Humanitarian Aid

“I’ve seen first-hand how UNHCR [Office of the UN High Commissioner for Refugees] – with its partners and with the refugees themselves – is working flat out to avoid an emergency within an emergency in Cox’s Bazar district,” said UNHCR Ambassador Blanchett Wednesday.

Having returned this week from a visit to Bangladesh’s Kutupalong, Nyapara and Chakmarkul settlements, she said UNHCR staff on the ground are distributing shelter and pre-monsoon kits to the vulnerable families, reinforcing roads, bridges, steps and other infrastructure at risk of being washed away, and relocating families to safer places where land is available

“But more is urgently needed to ensure refugees stay safe,” she said.

Since August 2017 when violence broke out in Myanmar’s northern Rakhine state, some 671,000 Rohingya Muslims fled to Bangladesh seeking saftey. Before the latest crisis began, the country was already hosting a verified population of well over 200,000 Rohingyas from Myanmar – and likely many more.

“But now, as the monsoon season approaches, the Government of Bangladesh, supported by UNHCR and its partners, are in a race against time to ensure the refugees are as safe as they can be to deal with potential floods and landslides,” she added, calling for the international community to show solidarity and share the responsibility.

“The people of Bangladesh and host communities have been the first to respond to this crisis, supported by agencies like UNHCR and its partners. But I cannot stress how much more help is needed for these vulnerable stateless refugees, the majority of whom are women and children.

Kevin J. Allen, Head of UNHCR’s emergency operation in Cox’s Bazaar, Bangladesh said, “Bangladesh saved thousands of lives when it opened its borders and arms to Rohingya refugees. It is now critical that we stand firmly with Bangladesh and the refugees we serve to protect them from cyclonic winds and heavy rains."

While UNHCR is working to build dignified and decent lives for the Rohingya refugees, it stresses that the solution lies in Myanmar, calling on that country to create conditions in Rakhine state to permit the safe, sustainable repatriation of those who choose to return home.

“This is the fastest growing refugee crisis in the world, the monsoons are coming and it is critical that the international community, private sector and individuals all do what they can to support these stateless refugees and the communities hosting them,” concluded Ms. Blanchett.

♦ Receive daily updates directly in your inbox - Subscribe here to a topic.
♦ Download the UN News app for your iOS or Android devices.
Rohingya|Bangladesh|refugee 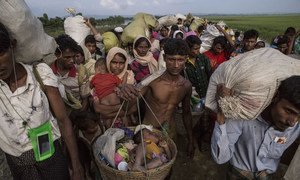 To meet the urgent needs of nearly 900,000 Rohingya refugees and more than 330,000 vulnerable Bangladeshis in the communities hosting them, United Nations agencies and their humanitarian partners appealed jointly on Friday for $951 million.