UNICEF/LeMoyne
A Rohingya refugee carries a child in a basket as he and others who crossed the Naf River the night before carry their belongings as they make their way through a no-man's land area along the border between Myanmar and Bangladesh.

To meet the urgent needs of nearly 900,000 Rohingya refugees and more than 330,000 vulnerable Bangladeshis in the communities hosting them, United Nations agencies and their humanitarian partners appealed jointly on Friday for $951 million.

“We are talking about truly critical needs here both on the part of the Bangladeshi communities who have so generously opened their doors, and of a Stateless and refugee population that even prior to this crisis was among the world’s most marginalised and at risk,” UN High Commissioner for Refugees Filippo Grandi said in Geneva, launching the 2018 Joint Response Plan (JRP) for the rohingya humanitarian crisis.

Over the months since the most recent Rohingya influx began, it has become the world’s fastest growing refugee crisis – with tens of thousands fleeing by land and sea daily from Myanmar’s northern Rakhine state at the peak of the emergency.

The Bangladesh Government and people have responded with extraordinary generosity and hospitality to the 671,000 Rohingya refugees who have arrived since 25 August.

Almost seven months in, refugees continue to arrive and the situation in Cox’s Bazar remains fluid.

The Kutupalong-Balukhali site, where some 600,000 refugees are living, is now the largest and most densely populated refugee settlement in the world.

Precarious conditions and the ongoing emergency response there are about to be further challenged by the approaching monsoon season, placing more than 150,000 Rohingya refugees at risk of landslides and floods, threatening disaster on top of the current emergency.

“The solutions to this crisis lie inside Myanmar, and conditions must be established that will allow refugees to return home,” said Mr. Grandi. “But today we are appealing for help with the immediate needs, and these needs are vast.”

Complementing Bangladesh’s continuing efforts, the 2018 appeal aims to bring together more than 100 UN agencies and national and international non-governmental organizations to ensure that refugees and host communities receive the life-saving assistance, protection and the support they desperately need. It also includes contingency planning for 80,000 more refugees in the coming months.

“The needs and vulnerabilities of the Rohingya refugee population in Bangladesh are immense,” said William Swing, Director General of    the UN International Organization for Migration (IOM).

“Many Governments generously supported the last Rohingya crisis appeal. Given the large scale of the emergency and the amount of humanitarian services needed to ensure lives can be protected with dignity, continued and enhanced support is necessary,” he added.

While acknowledging great appreciation for the generosity with which the response has been funded, Mia Seppo, UN Resident Coordinator in Bangladesh, lauded the Government’s efforts. 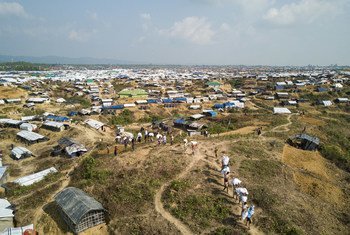 Against the backdrop of the fast approaching wet season in Bangladesh, United Nations relief agencies are working flat out to strengthen vital infrastructure and boost resilience among hundreds of thousands of Rohingya refugees living in rudimentary shelters as well as for local communities hosting them.