United Nations Secretary-General António Guterres has called on parties to the conflict in Syria to allow a humanitarian convoy to complete the delivery of supplies to Douma in eastern Ghouta planned for Thursday.

The latest convoy by the UN and its partners could not complete the delivery of life-saving humanitarian assistance to 27,500 people in Douma because of insecurity in the besieged enclave of eastern Ghouta, where the fighting reportedly killed more than 100 people on Monday alone.

“Nearly half of the food carried on the convoy could therefore not be delivered. Moreover, a part of the medical and health supplies to be included for delivery was removed by the Syrian authorities,” said UN Spokesman Stéphane Dujarric in a statement issued Tuesday, noting that the last time an inter-agency convoy reached eastern Ghouta this year was 14 February.

“The Secretary-General reminds all parties of their obligation under international humanitarian law and human rights law to protect civilians and civilian infrastructure at all times and of the basic responsibility to ensure the necessary protection of all humanitarian organisations, personnel, facilities and other relief assets,” Mr. Dujarric added.

Eastern Ghouta, located near the capital, Damascus, has been under heavy bombardment, with more than 400,000 people experiencing shortages of food, fuel, medicines and drinking water.

♦ Receive daily updates directly in your inbox - Subscribe here to a topic.
♦ Download the UN News app for your iOS or Android devices.
syria|East Ghouta 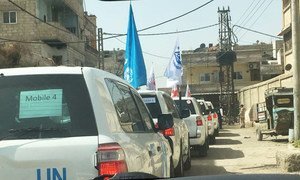