OCHA/Eve Sabbagh
People living in the Timbuktu area are amongst the most vulnerable in Mali..
15 February 2018
Humanitarian Aid

Aid agencies in Mali have launched the 2018 Humanitarian Response Plan (HRP ), asking for $263 million to provide humanitarian assistance to the most vulnerable people, a senior United Nations aid official in the country said

“Today, with this joint plan, the humanitarian actors renew their commitment alongside the Malian people,” Mbaranga Gasarabwe, Humanitarian Coordinator for Mali, said Wednesday.

The humanitarian community is focusing on food security and nutrition; protection; health services’ water; hygiene and sanitation; and education.

About 5.1 million people, or more than 27 per cent of the total population, live in areas affected by a security crisis – with food uncertainty affecting more than one-in-five people.

Between 2017 and 2018, the number of children suffering from severe acute malnutrition jumped more than 10 per cent, from 142,000 to an alarming 165,000 – weakening their immune systems and increasing their chances of death by nine-fold should they fall ill.

Four million of these in the northern regions will not be self-sufficient enough to meet their basic needs – in Mopti and Macina and Niono cercles in Segou.

The HRP aims to provide humanitarian assistance to the most vulnerable by strengthening access to basic social services, improving livelihoods and resilience, and strengthening emergency preparedness.

It focuses on emergency response, while encouraging the adoption of sustainable solutions in connection with development actors – taking into account the changing political and security context and the ability of actors to intervene on the ground.

"The world must stop observing the crisis only through a purely security prism,” warned Ms. Gasarabwe.”

“The current politico-security crisis comes in particular juxtapose with a chronic vulnerability inherent in natural hazards. Thus, the effects of climate change are perceptible with the rarefaction and irregularity of the rains, the early declines in the interior delta of Niger and the silting up of cultivable land. These factors promote food and nutritional insecurity and cause forced displacement of populations with the risk of community tensions and the deschooling of children," she added.

♦ Receive daily updates directly in your inbox - Subscribe here to a topic.
♦ Download the UN News app for your iOS or Android devices.
Children|humanitarian appeal 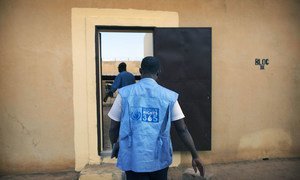 Despite the signing of a 2015 Peace Agreement, the human rights situation in Mali still remains a concern, according to a United Nations report published on Thursday.