Photo: OCHA
UN Deputy Emergency Relief Coordinator Ursala Mueller meets with a woman in Central African Republic who gave birth to a baby girl while she was fleeing violence to Paoua.

A senior United Nations relief official is urging the international community to boost support for humanitarian efforts in crisis-gripped Central African Republic (CAR), where nearly half the population requires assistance.

UN Deputy Emergency Relief Coordinator Ursula Mueller made the appeal in the capital, Bangui, on Thursday at the end of a four-day visit to the country.

“CAR is facing a large-scale humanitarian crisis,” she said. “Violence is fast spreading across the country while urgent and critical needs are increasing and should be covered. Civilians continue to bear the brunt of violence and insecurity.”

Clashes between the mainly Muslim Séléka rebel coalition and anti-Balaka militia, which are mostly Christian, plunged the country into civil conflict in 2013.

The UN Office for Coordination of Humanitarian Affairs (OCHA) has described the CAR as “a fragile country” that has been devastated by years of conflict and faces both structural and economic challenges.

Ms. Mueller, the Office’s second-in-command, said protection will “remain central” to its action there in 2018.

The UN and its partners are seeking $516 million to meet the needs of nearly two million people in the CAR this year, or roughly half the population.

However, as Ms. Mueller pointed out, funding for humanitarian operations in the country has declined over the past three years.  Meanwhile, the number of internally displaced people nearly doubled in 2017 to 694,000.

Ms. Mueller witnessed the human face of the humanitarian crisis when she visited the northern town of Paoua.

Clashes between armed groups have forced more than 65,000 people to flee there from surrounding villages.

“I have seen people who are hungry. I call on the international community to support the humanitarian response for Paoua. If we do not receive funding, people will die,” she stated.

Meanwhile, residents have also been affected.

The displaced people are living with local communities in Paoua which has depleted the limited resources available there.

Ms. Mueller also expressed appreciation to humanitarian workers in the town and across the CAR.

While in Paoua, Ms. Mueller met with displaced women, and marvelled at their strength and dignity amid what she described as “incredible hardships.”

She said: “They want safety, peace, and schools. What any mother wants for their children.”

One of the women, Veronique, fled to Paoua with her six children after her husband was killed.  Another woman, Esther, spoke about her struggle to access food, health care and education.

During her meeting with CAR President Faustin Archange Touadéra, Ms. Mueller underlined the need to ramp up efforts to protect civilians. She also shared concerns expressed by the displaced people in Paoua, namely the need for security to help them return to their homes.

The CAR is one of three countries that Ms. Mueller is visiting in West and Central Africa.

She will also visit Cameroon and Chad in a mission that will wrap up next Tuesday, 27 February. 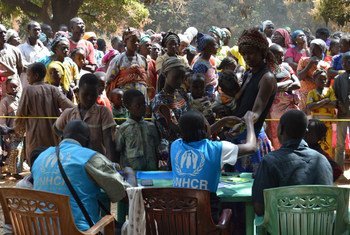 23 January 2018
Surging violence in the Central African Republic (CAR) has put unprecedented numbers of people on the run, the United Nations refugee agency said Tuesday, reporting that hungry, desperate arrivals being registered in neighbouring Chad say their houses have been torched and that armed groups are “killing anyone in their way.”