MINUSCA Photo
A peacekeeper on patrol in the PK5 neighborhood in Bangui, CAR.
22 February 2018
Peace and Security

The violence plaguing communities across the Central African Republic (CAR) is a reminder that despite the efforts of all stakeholders, the path to peace, stability and reconciliation in the country remains long and difficult, a senior United Nations official told the Security Council on Thursday.

The “tragedy” of refugees and internally displaced persons unable to return to their homes due to violence and insecurity “darkens an already precarious humanitarian picture where the lives of nearly half of CAR’s population would be unimaginable without emergency humanitarian assistance,” said Parfait Onanga-Anyanga, the Special Representative of the Secretary-General and Head of the UN mission in the country, known by its French acronym, MINUSCA.

Such “unacceptable” abuses and violations of human rights are mostly committed by armed groups which have not yet shunned criminal activities and refuse to take up the Government’s offer for dialogue, he added.

The UN envoy informed the 15-member Council of work undertaken by the Government to restore State presence and strengthen newly established democratic institutions.

“This positive impetus is also seen in the reinforcement of national judicial structures,” he said, noting the recent establishment of the Bangui and Bouar Courts of Appeal and that preparations for the launching of the work of a special criminal court are “well advanced.”

Highlighting the importance campaign against immunity, Mr. Onanga-Anyanga said that the setting up of the formal justice systems together with the establishment of transitional justice mechanisms would a long way in ensuring lasting peace.

Also in his briefing, the head of MINUSCA informed the Security Council on the activities of the mission and its commitment to strong delivery of its mandate while abiding by the highest standards of conduct and discipline.

“Efforts are underway to more effectively protect civilian populations while ensuring the safety and security of our own peacekeepers,” he said, central to his, he underscored is ensuring full implementation of the Secretary-General’s zero tolerance policy to prevent sexual exploitation and abuse. 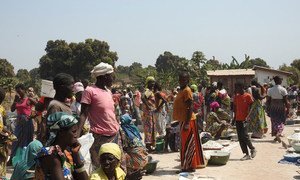 The United Nations Mission in the troubled Central African Republic, known by its French acronym, MINUSCA, has given armed groups in the north of the country 48 hours to clear out.