‘There is no plan B,’ says Guterres, reiterating UN’s commitment to two-state solution to Israeli-Palestinian conflict

After over a century of hostilities including 50 years of continued military occupation, Israelis and Palestinians are still no closer to peace, a United Nations special envoy said on Tuesday, warning that even as many in the region have lost hope for positive change, the enemies of peace are growing more confident by the day.

UN Special Coordinator for the Middle East Process Nikolay Mladenov delivered his latest monthly briefing to the Security Council, noting that he was doing so at a time when “regional tensions are taking an increasingly perilous turn.”

His comments echoed remarks by UN Secretary-General António Guterres who opened the meeting by underscoring his commitment to achieving two democratic States living side-by-side in peace.

Mr. Guterres emphasized the Organization’s long-held support for a two-state solution to the Israeli-Palestinian conflict, stressing: “There is no Plan B.”

“This is a time for dialogue, for reconciliation, for reason,” the UN chief said, expressing concern that global consensus on the issue may be eroding.

Warning that “obstacles on the ground have the potential to create an irreversible one-state reality,” Mr. Guterres underscored however that: “It is simply impossible to square the circle of a one-state reality with the legitimate national, historic and democratic aspirations of both Israelis and Palestinians.”

“At this moment of grave consequence, I appeal for effective concerted action by all parties.  It is more important than ever.”

Mr. Mladenov reported on developments such as the need to maintain support for the UN agency assisting Palestinian refugees across the region, UNRWA, as it faces a substantial funding shortfall.

He also spoke of the violence affecting both sides, including the killing of seven Palestinians by the Israeli security forces and the stabbing death of an Israeli civilian by a Palestinian in the West Bank.

Mr. Mladenov also said it was time to “break the cycle” in Gaza, which has been under the control of Hamas for a decade and which currently is facing what he described as a “humanitarian, economic and ecological calamity.”

He called for Gaza to be returned to the control of the Palestinian Authority, adding that “there can be no Palestinian state without Palestinian unity.”

Mr. Mladenov also urged the international community to continue advocating for “substantial” Israeli policy changes related to the West Bank, including halting settlement construction there: something the UN considers illegal under international law.

“In this chamber, we have often spoken of the need for leadership on both sides to reach a deal, a compromise, through negotiations that would allow Israelis and Palestinians to separate and be master of their own fate. But these negotiations would not be negotiations between equals,” he said.

“For one side is under military occupation. Its leadership has committed to a peaceful solution to the conflict through negotiation. I urge, in closing, the international community not to give up on support for the moderate Palestinian leadership or on building up the institutions that will increase the chances of success. Our window of opportunity is closing and, if we do not seize it quickly, the Israeli- Palestinian conflict will be engulfed in the whirlwind of religious radicalization that remains present in the region.”

Also addressing the Council, Palestinian President Mahmoud Abbas addressed concerns surrounding the status of Jerusalem, considered holy by both Jews and Muslims as well as Christians.

He recalled the decision announced last December by United States President Donald Trump to recognize the city as Israel’s capital.

“It did so ignoring that East Jerusalem is part of the Palestinian territory. It is occupied since 1967. And it is our capital open to all the faithful of the three monotheistic religions,” he said.

Mr. Abbas described the situation of the Palestinian people as “no longer bearable,” and he called for an international peace conference to be convened this year as a means to find a solution to the stalemate.

Israel’s representative to the United Nations Danny Danon also touched on the issue of Jerusalem, observing that the Palestinian leader had left the room prior to his presentation.

“We will always insist on Israeli sovereignty but even fair-minded observers would agree that under any possible agreement, Jerusalem would be recognized internationally as our capital.”

Prior to the start of Tuesday’s meeting, ambassadors observed a moment of silence in honour of one of their former colleagues, Ambassador Vitaly Churkin of the Russian Federation, who died a year ago that day. 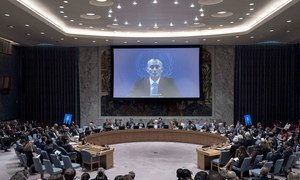 The United Nations, the Security Council and the wider international community all have fallen into a pattern of “managing, rather than resolving” the Palestinian-Israeli conflict, the UN envoy on the Middle East peace process warned Thursday, saying it was time to end this paralysis, show political leadership and push for policies on the ground that rebuild trust.