A UN International Media Seminar on Peace in the Middle East concluded on Wednesday, with a vibrant online panel discussion exploring how the systematic spread of untruths has changed the way traditional news outlets cover the Israel-Palestine conflict, and created avenues for citizen journalists to quickly push out stories to express their lived realities.

A tale of two narratives

Opening the panel – held under the theme, “A tale of two narratives:  misinformation and disinformation” – Nanette Braun, Chief of the Communications Campaigns Service at the UN Department of Global Communications, said the face of journalism has changed dramatically in recent years.  New platforms and technologies have transformed the way news is made, delivered and consumed.  “Anyone with a cell phone can broadcast information to the public with one click,” she said.

However, she said the doing away with a rigorous editorial process also has fomented the spread of disinformation – content created to cause harm, often through sophisticated campaigns - and misinformation, information that is false but not aimed at causing damage.

Throughout the day, panellists explored media coverage of the conflict and issues influencing public understanding of its dynamics, with Walid Batrawi, an award-winning media and communications consultant, stressing that Palestinian journalists often do not have the tools to verify information they receive.  The lack of official information from Palestinian authorities, coupled with the fact that they cannot access information in Israel, leaves the Palestinian public with little choice but to tune into other news sources, he said.

As a result, said Allyn Fisher-Ilan, an Editor with Haaretz, Israelis and Palestinians are mis- and disinformed about each other.  She pointed out that Haaretz is the only mainstream newspaper in Israel to use the term “occupation” and to cover related events.

Damian Radcliffe, Professor of Journalism at the University of Oregon – and an experienced digital analyst – said these trends have led to a flatlining of the media.  It is difficult to discern fact from fiction in the social space, and the risks associated with confirmation bias are heightened.

Organized by the United Nations Department of Global Communications, the Seminar, held virtually over two days, explored the prospects for peace amid dramatic shifts in the political, technological, cultural and media landscapes.  A panel discussion on 8 December explored the theme, “The Israel-Palestine conflict and challenges of the new decade”.

Welcoming participants on day one, Melissa Fleming, Under-Secretary-General for Global Communications, said the Seminar provides an annual opportunity for media practitioners and experts to learn more about trends in the conflict between Israelis and Palestinians.  “We will hear the exchange of ideas, experiences and perceptions,” she added.

Peace prospects ‘remote as ever’

António Guterres, Secretary-General of the United Nations, addressing participants in a message read out by Ms. Fleming, recalled that the annual event was born 29 years ago to help promote peace and understanding between Israelis and Palestinians.

“Unfortunately, the possibility of that peace seems as remote as ever,” he said. Palestinians’ dreams, for generations, have been “dimmed by conflict and more than half a century of occupation”. He also recognized the legitimate concerns of Israelis.

Stressing that two-State solution remains the only path for ensuring both sides can realize their legitimate aspirations, Mr. Guterres vowed to continue speaking out against any effort that undermines peace and “moves the parties further away from constructive negotiations”.

Cheikh Niang, Chairman of the Committee on the Exercise of the Inalienable Rights of the Palestinian People, said the Committee faces challenges in countering disinformation.  Its connections with the media are integral to its work, amid “incessant efforts” to distract reporters from the fact that peaceful resolution of the Palestinian-Israeli conflict is the only route to peace in the region.

A call to report truth

“I urge you in the media fraternity to seriously consider how history will judge our generation if we were to wrong the Palestinian people twice over,” he said, first by standing aside while their rights are denied, and then by misreporting or not reporting current events.  “This would be tantamount to a miscarriage of justice,” he stressed.

He expressed full support for the proposal by the President of the State of Palestine to hold an international peace conference in 2021. 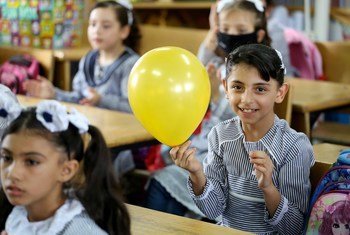