UN Photo/Kim Haughton
On large screen: Special Coordinator for the Middle East Peace Process Nickolay Mladenov briefs the Security Council on the situation in the Middle East, including the Palestinian Question.

The United Nations, the Security Council and the wider international community all have fallen into a pattern of “managing, rather than resolving” the Palestinian-Israeli conflict, the UN envoy on the Middle East peace process warned Thursday, saying it was time to end this paralysis, show political leadership and push for policies on the ground that rebuild trust.

“Twenty-five years after the Oslo Accords, we are at a critical point in the peace process,” said Nickolay Mladenov, Special Coordinator for the Middle East Peace Process, at a Security Council briefing, referring to a set of agreements, the first of which was signed in 1993, establishing a timetable for achieving peace between the two sides.

The uncertainty and volatility of the current environment, he continued, is hardening positions and sharpening the rhetoric on all sides, “a situation that plays directly into the hands of extremists and increases the risk of another conflict.”

He said that absent a credible proposal that can become the basis of final status negotiations, the international community must continue to build the conditions necessary for a resumption of talks.

“We must also reaffirm the international consensus that the two-State solution remains the only viable option for a just and sustainable end to the conflict. We must be unwavering in this position,” he said.

The two-State solution means having Israel and Palestine as two separate States living side by side in peace, security and mutual recognition.

We must also reaffirm the international consensus that the two-State solution remains the only viable option for a just and sustainable end to the conflict. We must be unwavering in this position

Mr. Mladenov noted that there are those who believe that the conflict can be solved through peaceful bilateral negotiations and compromises, by addressing the final status issues of borders, security, refugees and the status of Jerusalem on the basis of prior agreements and relevant UN resolutions.

Some believe in malting unilateral moves that can only lead to a one-state reality that is incompatible with the aspirations of both peoples. And there are those who believe in violence, he said.

“We – the United Nations, the Security Council, the international community – have a responsibility to prove that those who believe in violence and confrontation are wrong,” he said.

With this year marking the 25th anniversary of the Oslo Accords, it is time to push for policies on the ground that rebuild trust; to engage on final status issues on the basis of international consensus; to show political leadership to remove the obstacles to a sustainable solution.

This paralysis has elicited a heavy price: continued violence and insecurity; Israel’s ever-expanding, illegal settlement enterprise; a persistent Palestinian political divide; and a deteriorating, unsustainable situation in Gaza under the control of Hamas. Taken together, these elements kill hope, breed frustration, and increase radicalization on the ground, he explained.

While the Accords’ “daring” vision for peace remains to be fulfilled, “now is not the time to give up on Oslo. The alternative is not a better deal, but a worsening reality of occupation and humiliation,” he stated. 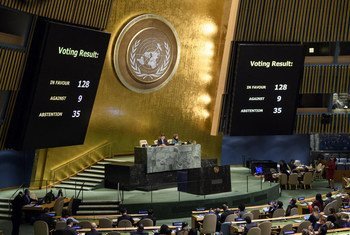