UNICEF/Amer Al Shami
A street in Douma, Eastern Ghouta, Syria. The OPCW Fact-Finding Mission said there were "reasonable grounds" to believe chlorine gas had been used in a chemical weapons attack in April 2018.

The conflict in Syria is now spilling over the country’s borders amid increased military intervention from multiple sources, a senior United Nations mediator said on Wednesday, warning that civilians are being killed on a horrific scale and the crisis is at one of the most “dangerous and worrying moments” in over four years.

“The last several weeks have seen a new cross‑border conflict in Afrin with yet no clear end in sight,” Staffan de Mistura, the UN Secretary-General’s Special Envoy for Syria, told the Security Council, referring to the northern Syria enclave near the Turkish border, which has become a major front in the ongoing Syria crisis.

After having served in his current position for more than four years, “this is as violent and worrying and dangerous a moment as any that I have seen in my time as Special Envoy,” Mr. de Mistura said.

He said the country has seen a string of dangerous and worrying escalations, including inside the de-escalation zones, or enclaves where hostilities are supposed to be eased, established by the three guarantors of talks in Astana – Russia, Iran and Turkey – as well as outside those areas.

There has been a gradual return to back-and-forth competition over territory in Idlib and Hama, as well as heavy and sustained airstrikes across the north-west and in besieged Eastern Ghouta.

Civilians have been killed on a horrific scale, with reports suggesting more than 1,000 people killed in the first week of February alone. Strikes continue to hit hospitals, schools and markets, and there are several allegations of chlorine attacks.

At least 320,000 people have been displaced due to fighting in Idlib in just two months, while there were reports of heavy mortar shelling falling across residential Damascus, wounding and killing civilians and damaging infrastructure, he said.

“There has not been a single United Nations humanitarian convoy to reach any besieged area since the end of November 2017,” he underscored.

“We urgently need genuine de-escalation [of the violence] to protect civilians, evacuate the sick and wounded and allow humanitarian aid to reach nearly three million people in hard‑to-reach areas,” he added.

What is taking place in Syria not only imperils the de-escalation arrangements and regional stability, it also undermines efforts for a political solution, he said, stressing that the UN-facilitated Geneva process is the only sustainable path towards that solution.

Mr. de Mistura told the Council that since the Vienna and Sochi meetings, held in late January, he has been consulting on the establishment of a constitutional committee for Syria. His team is in touch with a wide array of Syrians and he also continues to pursue the convening of Syria talks dealing with all four baskets of issues concerning Syria.

A secure, calm and neutral environment must be created if any constitutional progress is to unfold, he said. He intends to strike “while the iron is hot” and move the Geneva process of intra-Syrian talks ahead, but the Syrian people need the Council’s support now more than ever, he stressed. 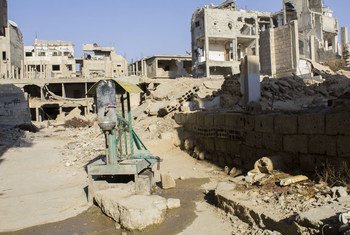 United Nations Secretary-General António Guterres has called for an immediate and unconditional de-escalation of violence in Syria as civilians in the war-torn country suffer through one of the most violent periods in nearly seven years of conflict.