UNICEF/Romenzi
Women and children walk through the debris of buildings and vehicles destroyed during intense fighting as they flee for safe areas in Mosul, Iraq.
14 February 2018
Economic Development

United Nations Secretary-General António Guterres on Wednesday launched a reconstruction programme for Iraq, urging the global community to support Iraqis as they embark on the journey to rebuild their country and make sure that it is committed to unity and inclusivity.

“Reconstruction and development programmes must go hand-in-hand with a strategy to prevent the recurrence of violent extremism and terrorism in Iraq,” Mr. Guterres said at an international donor conference in Kuwait.

“This must include full respect for human rights, including political, civil, economic, social and cultural rights,” he added.

The two-year Recovery and Resilience Programme, according to UN country team in Iraq, is designed to fast-track the social dimensions of reconstruction and help ensure that people see tangible improvements in their daily lives at the start of the reconstruction process, rather than waiting years to benefit from large-scale infrastructure projects and structural reforms.

The UN is seeking $482 million for the first year of the programme and an additional $568 million to help stabilize high-risk areas.

In December last year, Iraqi forces declared final victory over the Islamic State of Iraq and the Levant (ISIL/Da’esh), three years after the terrorist group captured large parts of the country’s territory.

According to estimates, nearly six million Iraqis were forced to flee their homes.

“[However,] throughout the conflict, the Iraqi people never wavered from their legendary tradition of hospitality, as families and communities across the country opened their homes to those fleeing death and chaos,” said Mr. Guterres, praising their spirit.

Highlighting the path ahead, the UN chief urged priority be accorded to those who still remain displaced from their homes, programmes aimed at empowering women and girls and said that the country’s reconciliation process must also include accountability for the crimes that have been committed.

Mr. Guterres said that the world “owes a debt” to the Iraqi people for their struggle against ISIL and that it is time for the global community to demonstrate its lasting gratitude and solidarity with the people of the country.

The reconstruction programme focuses on urgent priorities – helping people who have suffered the most, revitalizing the areas at the highest risk of return to violence, and advancing broad political participation and inclusive social harmony.

The programme includes nine components. Three will be implemented in high priority communities where violent extremism may possibly emerge unless steps are taken to restore community trust, build confidence in the Government and open economic opportunities.

The other components are national in scope. These focus on decentralizing basic services, promoting sustainable returns, providing support to survivors, accelerating community reconciliation and expanding political and social participation.

“Together with community and tribal reconciliation, national political settlement and accord, based on the principle of citizenship with equal rights, obligations, justice and opportunities for all, is critically important for a future stable, united and prosperous Iraq,” said the Special Representative of the United Nations Secretary-General (SRSG) for Iraq, Ján Kubiš. 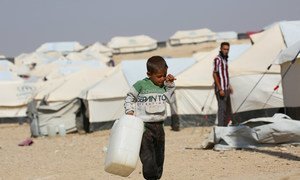