The United Nations will need to focus its efforts on supporting Guinea-Bissau’s national leaders in their efforts to appoint an acceptable Prime Minister, establish an inclusive Government, organize and conduct timely elections, and implement the priority reforms, a UN envoy for the West African country said Wednesday.

“After several years of long-term investment in the stability of Guinea-Bissau, it is time to consolidate and reap the dividends of our concerted efforts. It is vital that we accompany this process to its completion,” Modibo Ibrahim Touré, the Secretary-General’s Special Representative in Guinea-Bissau told the Security Council.

Mr. Touré stressed the importance for the Council to continue to reaffirm the centrality of the Conakry Agreement, reiterating its support to the Economic Community of West African States (ECOWAS) in its mediation efforts.

The Conakry Agreement of 14 October 2016 provides for, among other things, the appointment of a consensual Prime Minister.

According to the UN Department of Political Affairs (DPA), Guinea-Bissau has been plagued by chronic political instability since gaining independence in 1974.

The DPA provides support and oversight to the UN Integrated Peacebuilding Office for Guinea-Bissau (UNIOGBIS), a special political mission first established in 1999 following a two-year civil war in the country. Since mid-2016, the Mission is headed by Mr.Touré.

The main priorities of UNIOGBIS are to support efforts to consolidate constitutional order, further political dialogue and national reconciliation, encourage security sector reform, and promote respect for human rights and the rule of law.

“The absence of a functioning and stable Government for more than three years has limited the ability of UNIOGBIS to effectively and sustainably implement some of its mandated tasks,” said Mr.Touré.

Until the completion of the electoral cycle in 2019, Guinea-Bissau remains a country that requires a dedicated UN presence to prevent a further deterioration in the political and security situation at the national level and to avoid any negative spill-over to its neighbours and creating a fertile environment for trafficking to thrive, he noted.

“It will be important for the United Nations to remain engaged in peacebuilding efforts in the country while supporting ECOWAS intervention to resolve the political crisis for at least one more year,” he said.

Lastly, throughout the past year, the presence of ECOWAS Mission in Guinea Bissau has consistently acted as a deterrent to unauthorized military action and a stabilizing factor in the country, he said, calling on the Council and international donors to support the continued presence of ECOMIB through to the holding of a presidential election in 2019, including by advocating for the renewal of its mandate and the provision of the financial support needed to maintain its deployment. 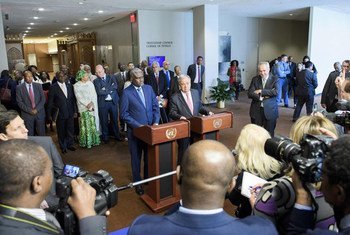 The top leaders of the African Union and the United Nations on Saturday expressed concern over the prolonged political crisis in Guinea-Bissau, condemning the recent actions taken by the national authorities to prevent a political party from holding its conference.