MINUSMA/Sylvain Liechti
A UN Human Rights Officer from the peacekeeping mission in Mali (MINUSMA) visiting the Sevare jail, in central Mali, to monitor the rights situation there.
1 February 2018
Human Rights

Despite the signing of a 2015 Peace Agreement, the human rights situation in Mali still remains a concern, according to a United Nations report published on Thursday.

It found that more than 600 cases of human rights violations and abuses were committed between January 2016 and June 2017: an interim period established under the peace deal aimed at laying the foundations for a democratic and unified country.

“This report provides useful insights on the challenges and progress in the human rights situation in northern and central Mali,” said Mahamat Saleh Annadif, Special Representative of the UN Secretary-General and Head of the UN Multidimensional Integrated Stabilization Mission in Mali (MINUSMA), which issued the report together with the Office of the High Commissioner for Human Rights (OHCHR).

“It also demonstrates that respect for human rights, far from being a generator of tension, may contribute, on the contrary, to creating an environment that is conducive to the implementation of the Peace Agreement.”

The Agreement on Peace and Reconciliation in Mali signed by the authorities, a rebel alliance from the north and a pro-government armed coalition, was finalized in June 2015.

The UN study showed that more than 800 other incidents involving unidentified armed elements and which put the lives of civilians at risk also took place during the reporting period.

Overall, these acts of violence impacted more than 2,700 victims, the majority of whom were men and children.

They include 441 individuals who were killed.

Nearly 80 per cent of violations, abuses and other incidents that put civilians at risk involved armed movements that were signatories to the Peace Agreement, those which had not signed it, or unidentified armed elements.

The report said primary factors which led to the violations include confrontations between signatory armed groups in the Kidal region, the expansion of activities of AQIM, Ansar Dine and other similar groups, and increasing armed robberies and other violent crime in the central regions of the country, as well as counter-terrorism operations conducted by the state.

♦ Receive daily updates directly in your inbox - Subscribe here to a topic.
♦ Download the UN News app for your iOS or Android devices.
mali|MINUSMA|OHCHR 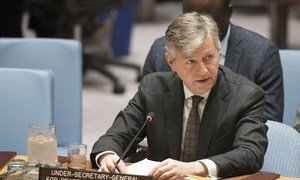 Against the backdrop of worsening security in Mali’s central regions and with presidential elections just six months away, a senior United Nations official on Tuesday said it is time to reexamine the configuration of the UN peacekeeping presence in the West African country to reflect the changing circumstances on the ground.