PAHO/WHO
Lab assistant growing culture viruses and bacteria in the “Infectious Room” of the Cancer Institute of Columbia.

Antimicrobials have been a driver of unprecedented medical and societal advances, but their overuse has resulted in antibiotic resistant bacteria, with the World Health Organization (WHO) reporting new surveillance data on Monday which reveals widespread resistance to some of the world’s most common infections, including E. coli and pneumonia.

Although the system does not include data on the resistance of Mycobacterium tuberculosis, which causes tuberculosis, WHO has been tracking and providing annual updates on it since 1994, in the Global tuberculosis report.

Among patients with suspected bloodstream infection, the proportion that had bacteria resistant to at least one of the most commonly used antibiotics ranged widely – from zero to 82 per cent – between different countries.

Resistance to penicillin, which has been used for decades to treat pneumonia, ranged from zero to 51 per cent among reporting countries. And between 8 to 65 per cent of E. coli associated with urinary tract infections presented resistance to the antibiotic commonly used to treat it, ciprofloxacin.

“Some of the world’s most common – and potentially most dangerous – infections are proving drug-resistant,” Dr. Sprenger observed.

“And most worrying of all, pathogens don’t respect national borders,” he added.

“WHO is encouraging all countries to set up good surveillance systems for detecting drug resistance that can provide data to this global system,” Dr. Sprenger asserted.

The quality and completeness of data in this first GLASS report vary widely. Some countries face major challenges in building their national surveillance systems, including a lack of personnel, funds and infrastructure.

“The report is a vital first step towards improving our understanding of the extent of antimicrobial resistance. Surveillance is in its infancy, but it is vital to develop it if we are to anticipate and tackle one of the biggest threats to global public health,” explained Dr. Carmem Pessoa-Silva, WHO surveillance system coordinator.

WHO is supporting countries in setting up national antimicrobial resistance surveillance systems to produce reliable, meaningful data, with GLASS helping to standardize data collection for a more complete picture of patterns and trends. 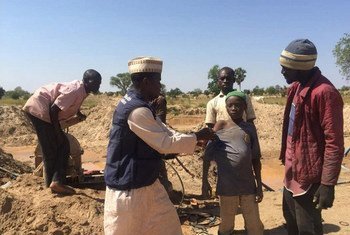 The Nigerian Government launched a mass vaccination campaign in alliance with the World Health Organization (WHO) on Thursday, aiming to immunize more than 25 million people before the end of this year.