Hailing the partnership between Africa and the United Nations as “solid, and grounded on sound principles of human rights and good governance,” Secretary General, Antonio Guterres told leaders gathered in Addis Ababa, Ethiopia, for the African Union Summit, that with Africa in the lead, “we can and will do more” to bolster successful cooperation throughout the continent.

“I stand here on behalf of the United Nations system and reaffirm our strong commitment to the member states and the people of Africa,” Mr. Guterres told the 30th Ordinary Session of the Assembly of the African Union (AU) on Sunday, adding: “I strongly believe Africa is one of the greatest forces for good in our world.”

The UN chief said that in just his first year in office, the Organization has entered a “new era” of partnership with the AU, recalling the holding of the first UN-AU Annual Conference at the summit level, as well as the signing of two landmark framework agreements, respectively on enhanced partnership in peace and security, and, just yesterday, on implementing the 2030 Agenda for Sustainable Development and the African Union's Agenda 2063.

Spotlighting these and other initiatives as key examples of the successful work the two organizations are carrying out across the continent, Mr. Guterres said this partnership could be further strengthened in five key areas: addressing corruption; cooperation in peace and security; inclusive and sustainable development; climate change; and international migration.

Combatting the “far-reaching and devastating” impact of corruption, tax evasion and illicit financial flows, a main theme of this year's AU Summit, “requires an unimpeachable commitment to transparency and accountability,” he said, commending the decision to highlight this scourge, and offering the strong support of the UN. He also welcomed the designation of 2018 as African Anti-Corruption Year.

VIDEO: Secretary-General António Guterres hails partnership between the United Nations and the AU, and highlights challenges such as food insecurity and the threat of terrorism.

Specifically on international migration, the UN chief expressed that the global phenomenon not only powers economic growth, reduces inequalities and connects diverse societies but also help ride the demographic waves of population growth and decline.

“We must maximize the benefits of orderly migration, while stamping out abuses and prejudice,” he said, highlighting the benefits of the Global Compact for Safe, Orderly and Regular Migration for all countries.

We must maximize the benefits of orderly migration, while stamping out abuses and prejudice UN chief Guterres

“I urge you to bring your moral leadership and unique experience to this important collective priority for 2018,” added Mr. Guterres.

On the peace and security sector, the UN chief expressed his appreciation to African governments for contributing troops and police to UN peacekeeping operations to help save lives and keep the peace around the world.

He, however, noted that UN peacekeeping is not the solution to all crisis situations, and said that partnership with the African Union and sub-regional organizations can be the means to address the varied contexts which necessitate peacekeeping, including peace enforcement and counter-terrorist operations. 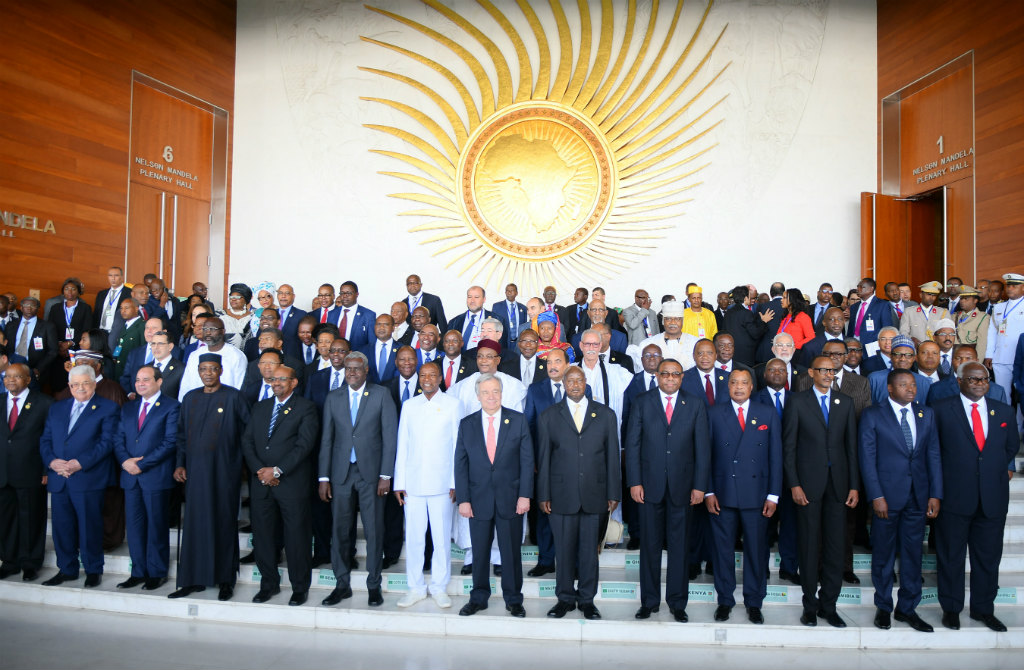 Secretary-General António Guterres (center) attends the opening ceremony of the 30th Ordinary Session of the Assembly of the African Union. UN Photo/Antonio Fiorente

But he acknowledged that while poverty elimination is a shared priority across the tow agendas, significant gaps persist, particularly with regard to industrialization, water, energy, infrastructure and the environment. “We must place quality education within the reach of all,” he underscored.

In that context, he urged all UN Member States to uphold their commitments to official development assistance ODA), outlined in the Addis Ababa Action Agenda on financing for development

Mr. Guterres also said the international community has a role to play in combating tax evasion, money laundering and the elimination of illicit financial flows that deprive Africa of its essential resources.

He said that around the world, there is skepticism about multilateralism. But he strongly believed that moving forward together, “the United Nations and the African Union can show that multilateralism is our best and only hope.”

Winnie Mandela left an ‘indelible mark on the history of the 20th century,’ says UN chief 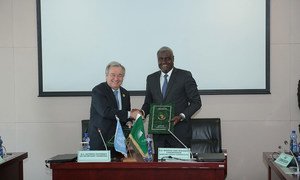 In Addis Ababa, Guterres says partnership with African Union is fundamental to work of the UN

Strong cooperation with the African Union (AU) is essential for the United Nations to be able to fulfill its mandate, Secretary-General António Guterres said on Saturday in Addis Ababa, Ethiopia, where the two organizations signed a new agreement to bolster their collaboration on range of global issues.