In Addis Ababa, Guterres says partnership with African Union is fundamental to work of the UN

Strong cooperation with the African Union (AU) is essential for the United Nations to be able to fulfill its mandate, Secretary-General António Guterres said on Saturday in Addis Ababa, Ethiopia, where the two organizations signed a new agreement to bolster their collaboration on range of global issues.

“For the United Nations, the most important partnership is the partnership with the African Union,” Mr. Guterres said, alongside Moussa Faki Mahamat, Chairperson of the African Union Commission, at the start of a weekend of activities for the UN chief at the 30th AU Summit, which gathers leaders from across the region, this year under the theme 'Winning the Fight against Corruption: A Sustainable Path to Africa's Transformation.'

After signing the new AU-UN Framework for the Implementation of Agenda 2063 and the 2030 Agenda for Sustainable Development, the Secretary-General said that across the three main pillars of the United Nations – development, peace and security, and human rights – the African continent is key to solving global problems.

“The international community would not be able to have successes in development if Africa does not succeed its development taking advantage of its youth 'dividend' youth,” he said, adding that neither world the global community secure lasting peace and security if Africa is not able to manage not only its conflicts, but above all, to make strong effort at conflict prevention and resolution.

“We will be side by side with the African Union in respecting African leadership in solving African problems to help in this [regard],” said the Secretary-General, adding that Africa has also made admirable strides in human rights.

“Today, we talk a lot about immigration. I have always seen African countries open their doors to refugees and migrants,” said the UN chief, adding that this is a lesson other parts of the world could learn from.

The agreement reached today, which follows the signing at UN Headquarters in April 2017 of a landmark framework to strengthen partnership between the UN and the AU on peace and security, and help the two organizations better respond to the evolving challenges of peace operations.

Among the other activities he participated in today, Mr. Guterres addressed a high-level event to take stock of progress on the renewed partnership to end hunger in Africa by 2025, where he noted that agricultural and livestock productivity on the continent are under threat and hunger rates continue to increase, and cited the close links among hunger, food insecurity and poverty.

“Sustainable and inclusive agricultural growth is vital to achieve both SDG1 [Sustainable Development Goal] on poverty and SDG2 on hunger, and also influences many other Goals,” he said, referring to the 17 Goals included in the 2030 Agenda for Sustainable Development, the action plan adopted by UN Member States in 2015, to ensure that all people live in peace, security and dignity on a healthy planet.

“This means adopting national agricultural policies and investment plans that focus not only on agricultural sector development, but on poverty, hunger and resilience to climate change,” he added.

He went on to draw a link between climatic shocks, environmental degradation, crop and livestock price collapse and conflict.

“Climate change adaptation should be promoted as an integral part of conflict prevention, with special attention to sustainable agriculture and pastoralist and semi-pastoralist livelihoods,” he urged.

He flagged that the majority of undernourished people in Africa live in conflict-affected countries, where hunger is almost twice as high when the crisis is protracted – advocating for stronger commitment by governments, the AU and the UN to promote peace, human rights and sustainable development.

“During conflicts and protracted crises, we still need to assist people most at risk of hunger and malnutrition and support them to build more resilient livelihoods,” he emphasized, adding: “That means preventive interventions to break the link between food insecurity and conflict, such as shielding consumers and producers from food price shocks through price stabilization measures and social protection interventions.”

the UN chief said that over time, by helping vulnerable households manage risks better, social protection can support investments in livelihoods that enhance people's resilience to future threats and crises.

“To build and sustain peace and address hunger and poverty, we need community-based approaches that build social cohesion and the capacity of local institutions and actors. Improved governance that can deliver equitable services is essential,” he asserted.

♦ Receive daily updates directly in your inbox - Subscribe here to a topic.
♦ Download the UN News app for your iOS or Android devices.
African Union 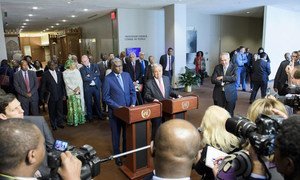 United Nations Secretary-General António Guterres and the Chairperson of the African Union, Moussa Faki Mahamat, today signed a new landmark framework to strengthen partnership between the two organizations on peace and security pillars and better respond to the changing dimensions and evolving challenges of peace operations.