The United Nations human rights office on Friday called on the authorities in Tunisia to ensure that protestors are not arrested in an arbitrary manner, and that all those detained are treated with full respect for their due process rights and other fundamental guarantees.

“We are closely watching the demonstrations across Tunisia and the authorities' response to them,” Rupert Colville, spokesperson of the Office of the UN High Commissioner for Human Rights (OHCHR), told reporters in Geneva, Switzerland, expressing concern about the high number of arrests – 778 people since Monday, some 200 of them between the ages of 15 and 20.

“The authorities must ensure that those exercising their rights to freedom of expression and peaceful assembly are not prevented from doing so,” he stressed.

Ahead of the 14 January anniversary of the 2011 revolution, it is particularly important to ensure that demonstrators are able to protest peacefully.

Those taking to the streets should exercise restraint and calm, Mr. Colville said. There has been looting, vandalism and violence, including damage to police stations and shops but peaceful demonstrators must not be held responsible or penalised for the violent acts of others, he added.

The UN human rights office urges all sides to work together towards resolving, with full respect for human rights, the economic and social problems underpinning the unrest, he said. 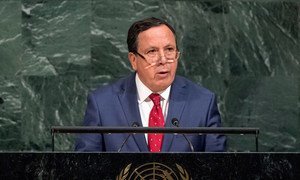 Tunisia, at UN, calls for comprehensive response to global terrorism

The threat of terrorism has forced Tunisia to double the budget of its military and security expenditures, Foreign Minister Khemais Jhinaoui told the United Nations General Assembly today, stressing that more international support was needed despite the Government’s efforts to stamp out the scourge.