In a year when the #metoo hashtag has inspired women across the globe to tell their personal tales of harassment and unwanted sexual advances in the workplace, a team of female television reporters in northern Afghanistan is promising to “leave no sister behind” by telling the often harrowing stories of Afghan women and girls trapped by abuse and gender-based violence.

In Afghanistan, the challenge of helping women tell these stories is fraught with peril. It requires the use of confidentiality and anonymity to protect women and girls who choose to speak out. Those who report abuse – from simple harassment to severe beatings and rape – risk retribution and often more violence, sometimes including murder, for speaking out.

“Our first step is to gain the trust of survivors,” says Raihana Rasoly, an anchor and reporter at Ariana Television in the city of Mazar-i-Sharif. “When we report on abuse, we are careful to follow up and stay in contact with those who want to tell their story through the media.”

She went on to say that the media outlet also works to help get the women to safety, including, if necessary, to the local women’s shelter.

“I would also say that when it comes to sexual harassment, female journalists know a lot about this problem,” adds Ms. Rasoly, who heads up the regional bureau of the Afghan Journalists Safety Committee. “In Afghanistan, if a woman or girl tells her story, she can be saddled with a stigma for life.”

Though women in developed countries are also subject to ostracism and further abuse for speaking out, in Afghanistan that can also be accompanied by societal perceptions that the violations of a women or girl have tainted her for life. She, in turn, can be abandoned by her own family. 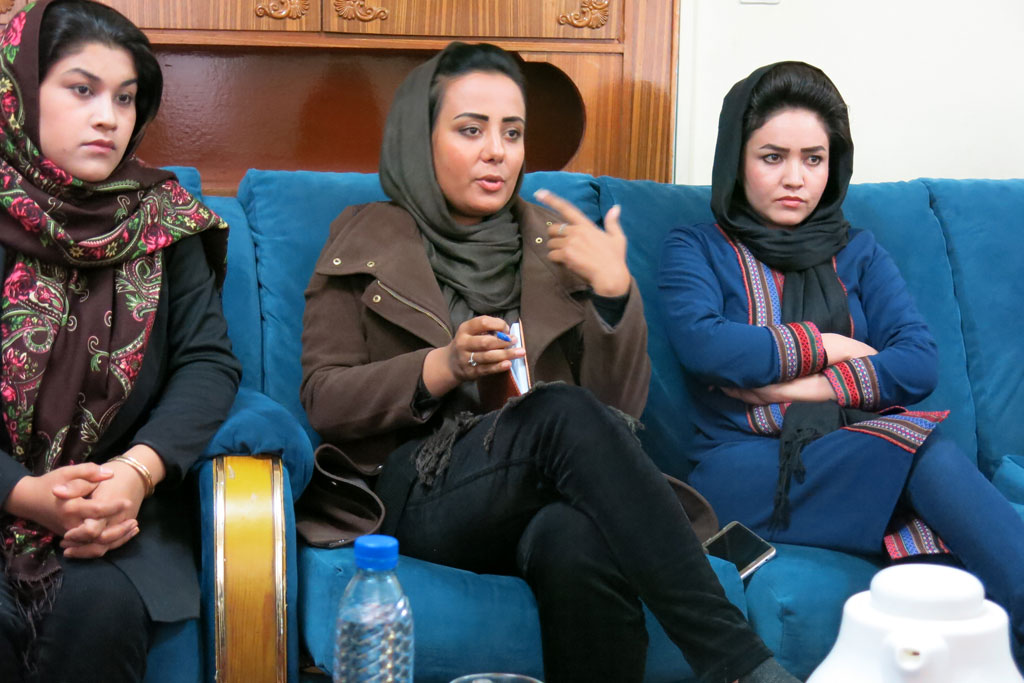 The UN has sponsored forums and athletic events to promote conversation and awareness of gender-based violence and harassment, and has worked with local media outlets to extend the messages coming out of these events to surrounding communities. The UN also has conducted traditional and social media campaigns to promote women’s rights, including through the participation of religious leaders, academics, elders and other public figures.

The best way to confront gender-based violence is to empower women, girls, and all others to speak up, according to Sayed Barez, a UNAMA public information officer. “When survivors are allowed to speak out – with the help of the media – it holds perpetrators accountable, turns lives around, and sensitizes society to all forms of gender-based violence, including sexual harassment.”

In the end, he says, although obstacles remain, “the UN hopes to help in Afghanistan’s transformation by focusing efforts around enforcing laws that defend women and by insisting on the view that all and any violence against women and girls is wrong.”

In Mazar, where efforts have been made to provide space and shelter for female survivors of violence and abuse, women who have sought protection have also been able to speak out through the media.

“Though it can be dangerous even for the shelters, depriving women of contact to the outside world and the media is illegal,” says Sayed Abdul Safwat, Director of Independent Cooperation for Change, an Afghan group instrumental in setting up women’s shelters across Afghanistan.

“Anything less than access to the media makes a shelter more akin to a prison,” he says. “Women should not be required to talk to the media, but they certainly should have the right to do so.” 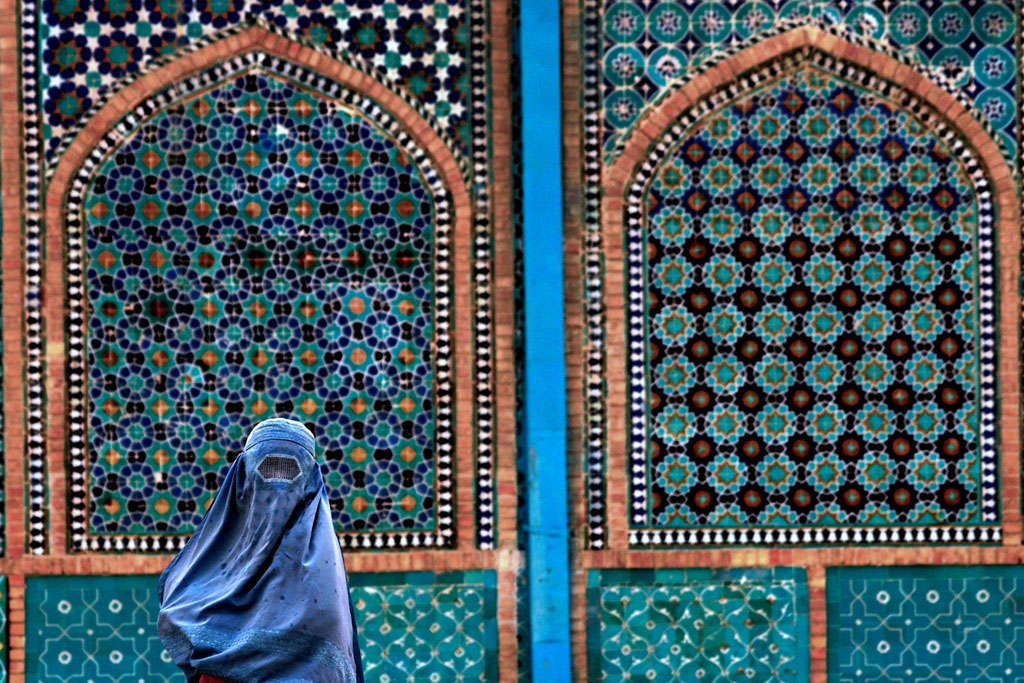 Afghan woman in traditional cover, known as a burka, at the Blue Mosque in Mazar. Photo: Jawad Jalail

In social media across Afghanistan, one trending hashtag is #wheresmyname, which highlights the effort of women to be heard and recognized by men. “Women are often ignored in Afghan society, and their interests fall on deaf ears, so this hashtag is a kind of a cry for recognition,” said Anosha Ansari, also a reporter at Ariana TV in Mazar.

“Even when women are losing hope, they still want to be heard,” she added, pointing out that women and girls can often go unnamed even on their gravestones, which merely read, “Wife of someone” or “Daughter of another.”

Social media is a way not only for abused women and girls to learn more about their rights with regard to gender-based violence, but also to highlight the plight of survivors, particularly in distant locales across Afghanistan.

Even when women are losing hope, they still want to be heard Anosha Ansari.

Yet Afghan women are usually reluctant to identify themselves with a real photo on Facebook, Twitter or elsewhere. “Of course, there is also self-censorship on social media,” said Ms. Ansari. “Women and girls usually want to avoid confrontation, so they often choose to keep stories of violence and abuse to themselves, but not always.”

Afghanistan’s media culture remains one of the most open and vibrant in the region, but breaking down conservative customs and taboos about discussing gender-based violence is a constant challenge. “There are still a lot of male leaders in society who say that this is not a subject that needs discussion,” said Ms. Rasoly. “That is a mindset that we are dealing with and trying to change.”

Each year, the international community marks 25 November as the International Day for the Elimination of Violence against Women. Beginning on that date, and running through Human Rights Day on 10 December, are the 16 Days of Activism against Gender-Based Violence Campaign. 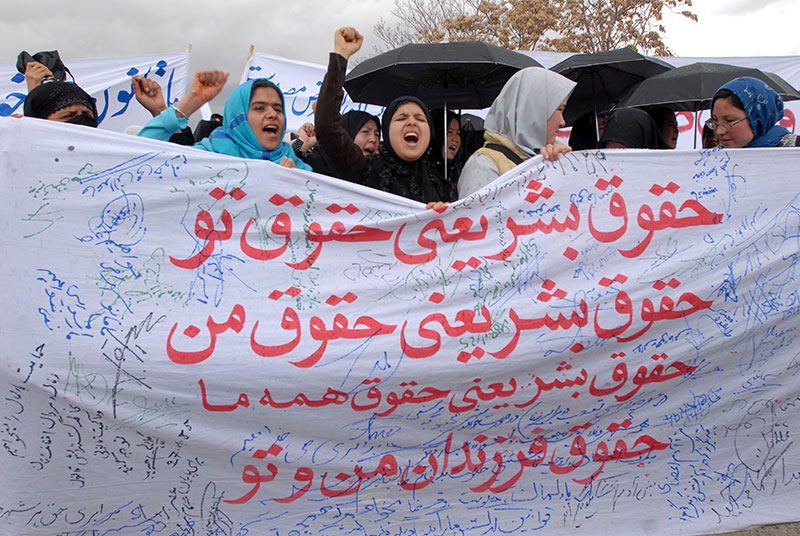 The theme for the 2017 campaign is “Leave No One Behind.” Civil society activists across the world, including those in Afghanistan, are calling for all governments to use laws and policies as tools to confront and punish the perpetrators of violence against women, and better protect everyone. Led by UN Women, the agency leading the global effort for gender equality, which also works on the ground in Afghanistan, the UN focuses attention on vulnerable groups.

Relentless fighting in the hinterlands of Afghanistan prevents reporters, including the team of women at Ariana TV, from covering the issue from the countryside where vulnerable groups are at their greatest risk.

“When we hear stories about rape or torture in the villages and try to report them in the villages, we are often stopped by elders or militants from gaining access to the story,” says Wahida Faizi, an Ariana TV reporter. “I would also add that women are sometimes more muted when they know they can be killed just for speaking out about violence and abuse against women in the countryside.”

UNAMA has a mandate to support the Government of Afghanistan and its citizens in a shared goal of becoming a stable, open, and peaceful nation. This feature piece is meant to tell a human interest story related to how Afghanistan and the UN are working together to overcome the many challenges to achieving this goal.

FROM THE FIELD: India’s pandemic of violence against women

FROM THE FIELD: Answering the call for help in Thailand 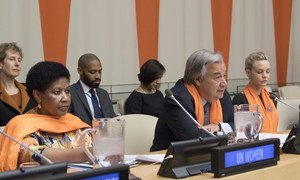 Achieving gender equality and the full empowerment of women is the answer to ending violence against women, United Nations Secretary-General António Guterres said Wednesday, calling for collective global action on this cause.