Achieving gender equality and the full empowerment of women is the answer to ending violence against women, United Nations Secretary-General António Guterres said Wednesday, calling for collective global action on this cause.

“Violence against women is fundamentally about power,” Mr. Guterres said in his remarks alongside UN Women Executive Director, Phumzile Mlambo-Ngcuka, at a special event held at UN Headquarters in New York to commemorate International Day for the Elimination of Violence against Women, which is annually observed on 25 November.

“It will only end when gender equality and the full empowerment of women will be a reality,” he stressed, adding that his policy on gender parity in the United Nations is one step towards achieving this goal.

Mr. Guterres noted that every woman and every girl have the right to a life free of violence, but this right is violated in a variety of ways in every community, with more than one in three women worldwide face violence throughout their lifetime.

This violence, the most visible sign of pervasive patriarchy and chauvinism, directly impacts women’s physical and psychological health. It affects whole families, communities and societies. While it continues, States will not achieve the 2030 Agenda for Sustainable Development, a master plan to end poverty and save the planet, adopted by them in 2015.

“There is increasing recognition that violence against women is a major barrier to the fulfilment of human rights, and a direct challenge to women’s inclusion and participation in sustainable development and sustaining peace,” said Mr. Guterres.

The United Nations is committed to addressing violence against women in all its forms, he stressed, citing such initiatives as the UN Trust Fund to End Violence Against Women, which has successfully awarded $129 million to 463 initiatives across 139 countries and territories over the past 20 years.

These also include the Spotlight Initiative recently launched by the UN and the European Union, as well as the UN Safe Cities and Safe Public Spaces Global Initiative, which seeks to help end sexual harassment and other forms of sexual violence in public spaces.

Mr. Guterres is also addressing the issue of sexual exploitation and abuse inhouse by launching a new, victim-centred approach to the offenses committed by those serving under the UN.

While noting that these initiatives should help deliver transformative change, he said much more remains to be done.

“It is time for united action from all of us, so that women and girls around the world can live free from all forms of violence,” he said. 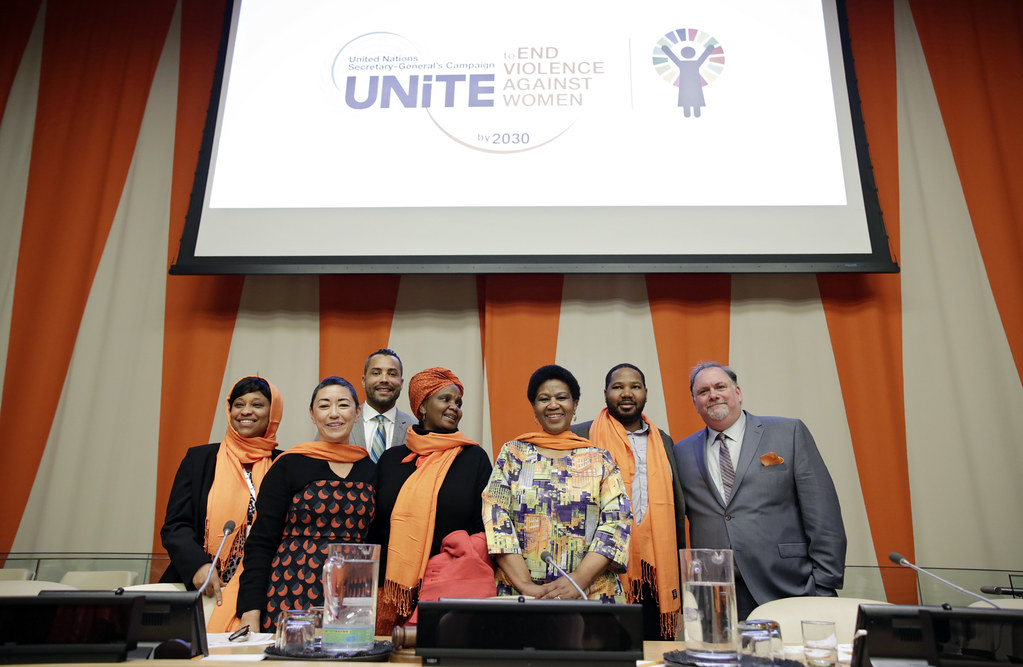 Led by UN Women and partners, hundreds of events will be held worldwide, including marches, flashmobs, concerts, and football and rugby games. Iconic buildings will be lit up in orange to galvanize attention during the 16 Days of Activism Against Gender-Based Violence from 25 November to 10 December, when the world marks Human Rights Day.

The 16 Days campaign takes place under the umbrella of the Secretary-General’s campaign UNiTE to End Violence against Women by 2030. Orange has been designated as the colour of the UNiTE campaign as it symbolizes hope and a violence-free world.

This year’s theme for the campaign is ‘Leave No One Behind: End Violence against Women and Girls.’

In her remarks to today's event, UN Women Executive Director Phumzile Mlambo-Ngcuka said that gender-based violence takes place hidden, but in plain sight, normalized so it is hardly noticeable.

“It becomes just part of life,” she said. “When we talk about leaving no one behind, we want to identify all these different forms of violence that women experience.”

She said the momentum has already been created by the #MeToo movement. This movement has exposed how men in authority can become serial perpetrators, and that men’s rise to positions of power does not always mean they respect those they are responsible for leading.

It also exposed how frightening it is for young women and young men to come to the front to expose those predators, because there is always the chance that they will not be believed. And it exposed how a culture of entitlement, where there are no consequences for sexual crimes, has left many women tormented in silence.

“Sanctions and accountability are critical for behaviour change, and for the coming generations to be socialized differently, so that they know that this is not acceptable,” she stressed.

AUDIO: Marking International Day for the Elimination of Violence against Women, Secretary-General António Guterres said every woman and girl had the right to a life free from violence, while more than one in three are victims of a violent act at some point in their lives.

Following a visit to Bangladesh’s Cox’s Bazar, where hundreds of thousands of Rohingya refugees from Myanmar have settled in makeshift camps, a United Nations envoy has called for enhanced measures to protect and assist victims of sexual violence among the displaced population.