UNHCR/Iason Foounten
In Libya, dozens of migrants sleep alongside one another in a cramped cell in Tripoli's Tariq al-Sikka detention facility.

The United Nations is stepping up its work to stop the grave abuses perpetrated against refugees and migrants along the Central Mediterranean routes, including alleged slave trade in Libya, two UN agency chiefs told the Security Council Tuesday.

The meeting was held at UN Headquarters in New York in response to growing international concerns about risks facing migrants and refugees, which were illustrated by recent news reports and videos showing African migrants in Libya allegedly being sold as slaves.

“This is an enormous human tragedy and we can stop it,” said William Lacy Swing, Director General of the International Organization for Migration (IOM), via video link from Geneva, underscoring the need to break the smugglers’ business model.

In such efforts, IOM has helped 13,000 people get out of detention centres in Libya and 8,000 in Niger, he said, noting that there are about 15,000 still in such facilities.

IOM is working with partners, including the Government of Libya, the Office of the UN High Commissioner for Refugees (UNHCR), the African Union, the European Union, and countries of origin, to forge an agreement to implement a programme to empty those detention centres, Mr. Swing said.

Also briefing was the UN High Commissioner for Refugees, Filippo Grandi, who told the Council: “The grave abuses perpetrated against migrants and refugees along the Central Mediterranean routes can no longer be ignored.”

“Compelled to flee, but without legal pathways to safety, refugees are exposed to appalling harm, together with migrants, including torture, rape, sexual exploitation, slavery and other forms of forced labour,” Mr. Grandi said, also via video link from Geneva, adding that these abuses proliferate where governance is weak and transnational criminal networks take root.

“This requires a comprehensive approach encompassing countries of origin, transit, and destination,” he stressed, highlighting the need to strengthen refugee protection and offer solutions along the routes.

UNHCR is stepping up its work – but faces “dramatic” funding gaps, especially in sub-Saharan Africa, he added.

UNHCR is helping the authorities address the needs of displaced Libyans and others affected by conflict. Reception and protection mechanisms are being incrementally strengthened. Plans for a transit centre in Tripoli are progressing positively.

“Too often, measures pursued in relation to the Mediterranean routes have centred on how to control, deter and exclude. This can have a dehumanizing effect – and more importantly, alone, it does not help refugees and migrants avoid exploitative, deeply harmful situations,” Mr. Grandi said, calling for a comprehensive set of political, security, humanitarian, human rights and development investments.

“Your attention is welcome, because your leadership is critical to ensuring that this happens,” he told the Council members.

Alert over spike in security operations against Libya migrants 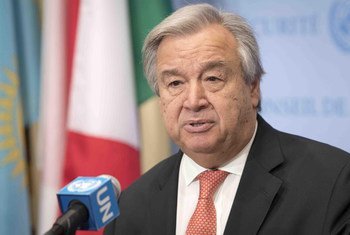 20 November 2017
Expressing horror at news reports and videos showing African migrants in Libya allegedly being sold as slaves, United Nations Secretary-General António Guterres on Monday called on the authorities to urgently investigate the situation and bring the perpetrators to justice.