The United Nations envoy for the Middle East peace process on Wednesday welcomed the full return of the Gaza crossings to the control of the Palestinian Authority.

“This is a landmark development in the implementation of the intra-Palestinian agreement, signed in Cairo on 12 October,” said UN Special Coordinator for the Middle East Peace Process, Nickolay Mladenov, in a statement.

“The positive momentum should be maintained and the Palestinian government must be fully empowered to function in Gaza,” he added.

According to media reports, the 12 October agreement between the Fatah and Hamas factions allows the Palestinian government to resume its responsibilities in Gaza. Under the agreement, the Palestinian Authority should take control of the crossings of the Gaza Strip by 1 November.

A statement released by Egypt, which facilitated the accord, said the Palestinian government should assume its full responsibilities to manage the enclave by 1 December.

The July 2016 report of the Middle East Quartet – comprising the UN, Russia, the United States and the European Union – identified the lack of Palestinian unity as one of the main obstacles to achieving a two-state solution, which is to establish a viable, sovereign Palestinian state that lives in peace and security with Israel.

“The return of the crossings should facilitate the lifting of the closures, while addressing Israel’s legitimate security concerns, and unlock increased international support for Gaza’s reconstruction, growth, stability and prosperity,” Mr. Mladenov said.

He reminded all factions in Gaza of the importance of maintaining security and ending militant activities that undermine peace and security for both Palestinians and Israelis alike.

Mr. Mladenov said the UN will continue to work with the Palestinian leadership, Egypt and the region to support this process, which is critical for reaching a negotiated two-state solution and sustainable peace in the Middle East. 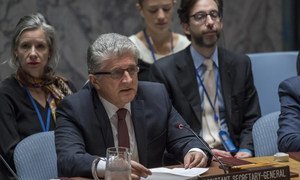 A senior United Nations political affairs official on Wednesday highlighted at the Security Council some positive developments on the Palestinian-Israeli conflict, particulalry on intra-Palestinian reconciliation efforts.