UNifeed Video
Drone shot, protesters walking towards the Gaza separation fence, with Israel. The anniversary of the "Great March of Return" protests, falls on 30 March, 2019.
29 March 2019
Peace and Security

In almost a year since weekly rallies began – known as the “Great March of Return and the Breaking of the Siege” – 195 Palestinians, including some 40 children, have been killed by Israeli fire near the border fence, Mr McGoldrick said in a written appeal.

“There has been a staggering loss of life and injury in the Gaza Strip,” he added. “Among the most tragic impacts have been the deaths and injury of children.”

The development follows this week’s rocket and airstrike exchanges between Hamas militants in Gaza, and Israel, that UN Special Coordinator for the Middle East Peace Process, Nickolay Mladenov, said had “shown us how precipitously close we are to the brink of war”.

Tweeting in Friday, Mr. Mladenov said that Israel "must calibrate use of force. Hamas must ensure protests remain peaceful, everyone must ensure that children are not put in danger".

Israel must callibrate use of force, Hamas must ensure protests remain peaceful, everyone must ensure that children are not be put in danger. A year of #Gaza protests have left too many people suffering. Situation remians VERY tense! #UN @jamiemcgoldric8 https://t.co/oPsVlmJ8b1

Briefing journalists in Geneva on behalf of Mr. McGoldrick, Jens Laerke from the Office for the Coordination of Humanitarian Affairs, (OCHA), said that “on the eve of the one-year anniversary…the priority now is to save lives and everyone needs to take action accordingly”.

The Israeli military “must ensure that their responses are in line with the international legal obligations using non-violent means to the greatest extent possible”, Mr. Laerke said, while urging leaders of the militant group Hamas, which controls Gaza, to prevent “acts of violence that compromise the peaceful nature of the demonstrations and everyone must ensure that children are not put in harm’s way”.

Large-scale protests could lead to ‘tragedy’ on anniversary

Concerns surrounding a possible “tragedy” on Saturday had been heightened by the news that the usual Friday protests had been postponed, Mr. Laerke explained.

“Demonstrations today have, extraordinarily, been cancelled with the call for demonstrations tomorrow” on a large scale, he said. “The reason why the humanitarian coordinator is issuing this (appeal) today, is exactly, precisely, because of his and our - the entire humanitarian community’s - concern that we could see another tragic day tomorrow and everything and everybody must do everything possible to avoid that.”

In addition to the Palestinians killed in protests since March 2018, nearly 29,000 more have been injured, Mr. Laerke said, “including over 7,000 people by live ammunition”.

Three clearly-marked healthworkers caring for the wounded during demonstrations were also killed, the OCHA spokesperson added, noting also that one member of the Israeli security forces had also been killed and six others injured.

Gaza health system unable to cope with rise in amputations

Amid longstanding shortages of basic goods and services in Gaza linked to a more than decade-long air, sea and land blockade by Israel, Mr. Laerke underlined the impact of the violence on already overstretched health system.

“The many Palestinian casualties, including trauma injuries and more than 120 limb amputations, has overwhelmed the Gaza health system, which was already challenged by chronic power outages, shortages of essential medicines and supplies, and gaps in critical services, including mental health and psychosocial support,” he said.

In comments to journalists in Geneva, the spokesperson insisted that “we are issuing…a stark reminder to everyone involved in this, that the protection of lives - not least of children - must be at the top of everyone’s agenda during what we would expect to be big demonstrations tomorrow.”

His comments echoed a warning earlier this week by Mr. Mladenov, “that we may, once again, be facing another very dangerous escalation of violence in Gaza, with potentially catastrophic consequences”.

In comments to the UN Security Council on Tuesday, Mr. Mladenov lamented the launch of at least 104 rockets and mortars from the Gaza Strip towards Israel in recent days, one of which struck a house in central Israel, injuring seven people, including three children.

Insisting that nobody had an interest in a full military confrontation in Gaza, the UN official explained to the 15-member body in New York the that his team had been working intensely with Egypt and all concerned parties to ensure that the situation does not spiral out of control.

♦ Receive daily updates directly in your inbox - Subscribe here to a topic.
♦ Download the UN News app for your iOS or Android devices.
Gaza|Israel|Palestine 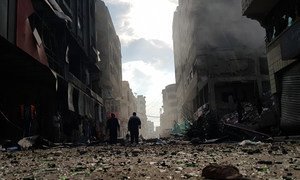 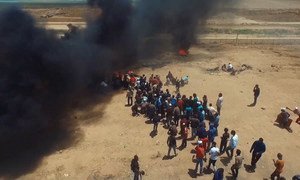