A senior United Nations political affairs official on Wednesday highlighted at the Security Council some positive developments on the Palestinian-Israeli conflict, particulalry on intra-Palestinian reconciliation efforts.

“Today’s briefing is taking place as important developments unfold to end the more than 10-year-long Palestinian divide and return Gaza to the full control of the legitimate Palestinian Authority,” Assistant Secretary-General for Political Affairs Miroslav Jenca said, referring to the 12 October agreement between the Fatah and Hamas factions that enables the Palestinian government to resume its responsibilities in Gaza.

Under the agreement, the Palestinian Authority should take control of the crossings of the Gaza Strip by 1 November. A statement released by Egypt, which facilitated the accord, further highlighted that the Palestinian Government should assume its full responsibilities in the management of the enclave by 1 December.

Mr. Jenca said that the agreement does not contain any provisions related to elections, the formation of a national unity government, or the disarming of Hamas.

On the humanitarian situation, he said that power supply restrictions have continued for the sixth consecutive month, leaving two million people in Gaza without electricity, except four to six hours per day.

Gaza is also “an unfolding environmental disaster that has no regard for borders,” he said, as the equivalent of over 40 Olympic-size swimming pools of virtually raw sewage continues to flow daily into the Mediterranean Sea, leaving the whole shoreline contaminated.

The quality of health care inside Gaza is deteriorating at an alarming rate. Access to medical care outside Gaza has also become increasingly difficult.

As the Government returns to Gaza, it is critical that urgent measures are taken to reverse these trends, he stressed.

He emphasized that “despite the overall negative trajectory that has characterized the Palestinian-Israeli conflict for far too long, there are reasons for cautious optimism.”

This past month, thousands of Israeli and Palestinian women united in a two-week march for peace that brought forward participants of all ages and backgrounds.

“The yearning for peace amongst both peoples remains strong. These grass-roots initiatives by civil society are critical to building the foundation for peace and must be supported,” he said.

Mr. Jenca also recalled that the July 2016 report of the Middle East Quartet – comprising the UN, Russia, the United States and the European Union – identified the lack of Palestinian unity as one of the main obstacles to achieving a two-state solution, which is to establish a viable, sovereign Palestinian state that lives in peace and security with Israel.

“The parties (Hamas and Fatah) have taken a crucial first step in this process,” he said. “Success carries with it an enormous opportunity, just as failure carries with it great risks. Palestinians need to decide which path they will take.” 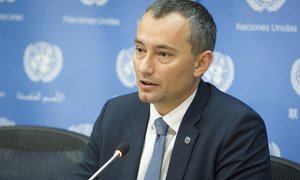 Meeting the Palestinian Prime Minister today, the United Nations Special Coordinator for the Middle East Peace Process, Nickolay Mladenov, and discussed the implementation of the intra-Palestinian agreement signed in the Egyptian capital, Cairo, on 12 October.