The Security Council today expressed a deep concern over the persistent delays in fully implementing key provisions of the peace agreement between the Government of Mali and the Plateforme and Coordination armed groups, urging the parties to adopt an agreed-upon timeline for implementation.

In a press statement, the Council welcomed the signing on 20 September 2017 by the Plateforme and Coordination armed groups of a series of commitments, including an immediate, comprehensive and definitive cessation of hostilities, calling on the armed groups to strictly adhere to this commitment.

The 15-member body underscored the pressing need to deliver tangible and visible peace dividends to the population in the country’s north and elsewhere to keep the momentum of the Agreement on Peace and Reconciliation in Mali, signed in 2015.

The Council expressed its intention to dedicate a specific focus of its upcoming visit to the Sahel region to the implementation of the Agreement.

The Council urged all parties to comply with their obligations under applicable international law and to bring an end to all human rights violations and abuses, and encouraged the Government to continue its efforts to combat impunity, with the support of the UN Multidimensional Integrated Stabilization Mission in Mali (MINUSMA).

Expressing a concern about the security situation in Mali and the threat posed by terrorism and transnational organized crime in the Sahel region, the Council underlined that the efforts by the force of the Group of Five for the Sahel States to counter the activities of terrorist groups and other organized criminal groups will contribute to create a more secure environment in the region and help MINUSMA fulfil its mandate to stabilize the country. 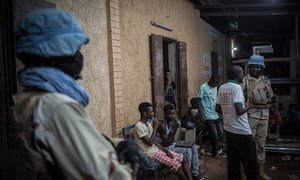 While recent crises threatening the peace process in Mali had been overcome and new agreements reached, progress must be accelerated as the situation remains perilous for peacekeepers and civilians, the head of United Nations peacekeeping efforts in the West African country told the Security Council today.