UNAMID
12 July; UNAMID peacekeepers from the Mission’s Team Site in Kutum in North Darfur, were dispatched to Kutum town to assess the security situation.
14 July 2020
Peace and Security

The joint UN-African Union Hybrid Operation in Darfur (UNAMID) is working with Sudanese and local authorities to de-escalate tensions following recent violent incidents in two nearby towns, including a deadly attack on a camp for internally displaced persons (IDPs).

The peacekeeping mission reported that violence broke out in Kutum, located in North Darfur, on Sunday, while nine people were killed and 20 others injured, when unidentified armed men attacked the Fato Borno IDP camp the following morning.

Protestors, mainly IDPs, have been holding sit-ins in front of Government buildings to demand improved security in the region, according to media reports.

UNAMID has condemned the loss of life, injuries and damage to Government buildings.

“While the farming seasons in Darfur have witnessed such occurrences in the past, it is regrettable that these incidents have taken place while the transitional Government of Sudan and the armed movements are close to concluding negotiations expected to bring peace and stability, and the promise of prosperity to the Darfur region and the whole of Sudan”, the mission said on Tuesday.

UNAMID has dispatched additional personnel to the area, and has intensified patrols to ensure the safety and protection of IDPs.

The mission has also been engaging community leaders and urges all parties to exercise restraint.

A UNAMID patrol team managed to enter the Fata Borno IDP camp on Monday and recovered the bodies of the nine people who were killed.

Peacekeepers also evacuated the injured IDPs by road to Kutum, where they were admitted to a mission hospital overnight for stabilization and further assessment.

At the request of the Government, the mission evacuated 13 critically injured people by air to the state capital, El Fasher.

UNAMID continues to work with the relevant authorities at all levels to restore calm and prevent further violence, it said.

♦ Receive daily updates directly in your inbox - Subscribe here to a topic.
♦ Download the UN News app for your iOS or Android devices.
unamid|peacekeeping 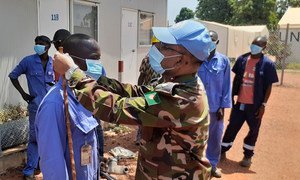 The COVID-19 pandemic is “profoundly affecting” peace and security across the globe, the Secretary-General told the Security Council on Thursday, pressing the 15-member body to use its collective influence to protect the millions of people either trapped in, or fleeing conflict, and already facing acute vulnerabilities. 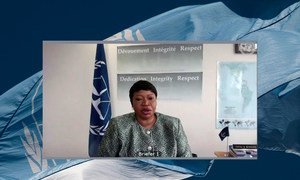