A three-day event on how to, among other things, improve women’s involvement in the aerospace sector as well as in the fields of science, technology and mathematics, kicked off today under the leadership of two United Nations offices.

The UN Office for Outer Space Affairs (UNOOSA) and UN Women have teamed up in organizing a ‘Space for Women’ Expert Meeting that will culminate at UN Headquarters in New York to share expertise, enhance partnerships and promote efforts to encourage women and girls to become involved in science, technology, engineering and mathematics (STEM) education – especially in developing countries.

“Space for Women is really a gender mainstreaming project where we will like to work with Member States; not only for STEM education but also to help young girls when they graduate to then find their place in their own society without being obliged to leave their own country,” Simonetta Di Pippo, Director of UNOOSA, said prior to the event.

The meeting will also delve into the role of space technology and science to fulfil Sustainable Development Goal (SDG) 5 on gender equality.

“And this has to be done with each Member State, and we will start with a small group of champions – as I like to call them – so, pilot countries with which we will develop this medium to long-term project,” she added.

With the most cross-cutting thematic priority of “capacity-building for the twenty-first century,” the event is discussing innovative approaches to meet the 2030 Agenda.

Astronauts, diplomats, decision makers and experts from around the globe have converged in to discuss the creation of a dedicated ‘Space for Women’ Project.

In line with UNOOSA’s vision to bring the benefits of space to humankind, the focus of the Project is to realize that women and girls are included in those benefits and that they play an active and equal role in space science, technology, innovation and exploration.

On the final day of the event, a high-level panel on ‘Space for Women,’ which will include UN Deputy Secretary-General Amina Mohammed, Ms. Di Pippo and UN Women’s Deputy Executive Director Laskhmi Puri, will make recommendations to UNOOSA.

The proposals, which will focus on using space to empower women, women’s involvement in the aerospace industry and STEM fields, and how alliances can be made to move forward the project, will feed into the development of the 'Space for Women' project.

The first UN Conference on the Exploration and Peaceful Uses of Outer Space on the global governance of space activities, known as UNISPACE, was held in 1968 – with subsequent others in 1968, 1982 and 1999. June 2018 will mark its 50th anniversary with a special segment of the Committee on the Peaceful Uses of Outer Space, which will set the future course of global space cooperation to advance humanity.

In December 1999, the General Assembly declared World Space Week to be celebrated internationally each year from 4 to 10 October.

♦ Receive daily updates directly in your inbox - Subscribe here to a topic.
♦ Download the UN News app for your iOS or Android devices.
sustainable development|outer space 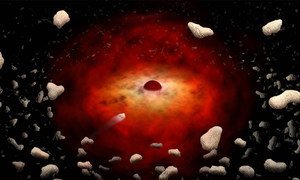 A top United Nations official today urged the international community to come together to jointly raise awareness and develop a plan to mitigate the danger from a potential asteroid impact.