“In addition to illegal settlements, the practice of demolishing Palestinian structures in the West Bank, including East Jerusalem, and displacing Palestinians undermines the prospects of peace,” said Nickolay Mladenov, Special Coordinator for the Middle East Peace Process.

Briefing the 15-member body on the latest developments, Mr. Mladenov reported that since June, Israel’s illegal settlement activities have continued at a “high rate,” a consistent pattern over the course of this year. Activity during this period was concentrated primarily in occupied East Jerusalem, where plans were advanced for over 2,300 housing units in July, 30 per cent more than for the whole of 2016.

The reporting period witnessed the eviction of a Palestinian family in Sheikh Jarrah, residents for over 50 years, after a protracted legal battle. The building is located in a section of the neighbourhood in which several settlement plans were among those promoted in July.

an impediment to peace,” the Special Coordinator stated.

He went on to note that violence persisted as one of the main obstacles to resolving the conflict. Although the reporting period was characterized by relatively low levels of fatalities, a number of incidents occurred, resulting in the deaths of 19 Palestinians and eight Israelis. Settler-related violence and punitive demolitions of Palestinians homes by the Israeli authorities also continued.

“Continued violence against civilians and incitement perpetuate mutual fear and suspicion, while impeding any efforts to bridge the gaps between the two sides,” said Mr. Mladenov.

“I once again urge both Palestinians and Israelis to demonstrate their commitment to rejecting violence, inflammatory rhetoric and provocative actions.” 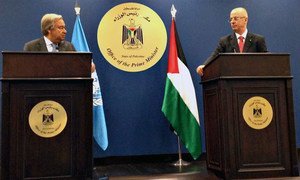