Protecting the oceans is among the objectives of the Sustainable Development Goals (SDGs), the blueprint for a more just and equitable world adopted by the 193 Member States of the United Nations in September 2015.

SDG 14 on conserving and sustainably using marine resources is the springboard for the Ocean Conference, taking place at UN Headquarters in New York from 5 to 9 June.

The meeting is especially relevant to Caribbean countries, according to Juan Miguel Diez, Director of the UN Information Centre (UNIC) for the region.

"The Ocean Conference is a dream come true for us in the Caribbean," he said. "It brings together SDG 14, but also the rest of the SDGs, and provides us with an amazing opportunity to continue to do our work to raise awareness about this particular goal, but also to bring stakeholders together."

The UNIC is based in Trinidad and Tobago, home to nearly 1.4 million people whose existence is tied to the sea, as Neila Bobb Prescott of the Food and Agriculture Organization's (FAO) field office in the capital, Port of Spain, explained.

"Trinidad and Tobago is blessed with a particular phenomenon in that in our authority or geographic area, the ocean is 15 times greater than the land. We have so many livelihoods impacted by the health of the marine system, so hence we need to pay attention to it," she said. 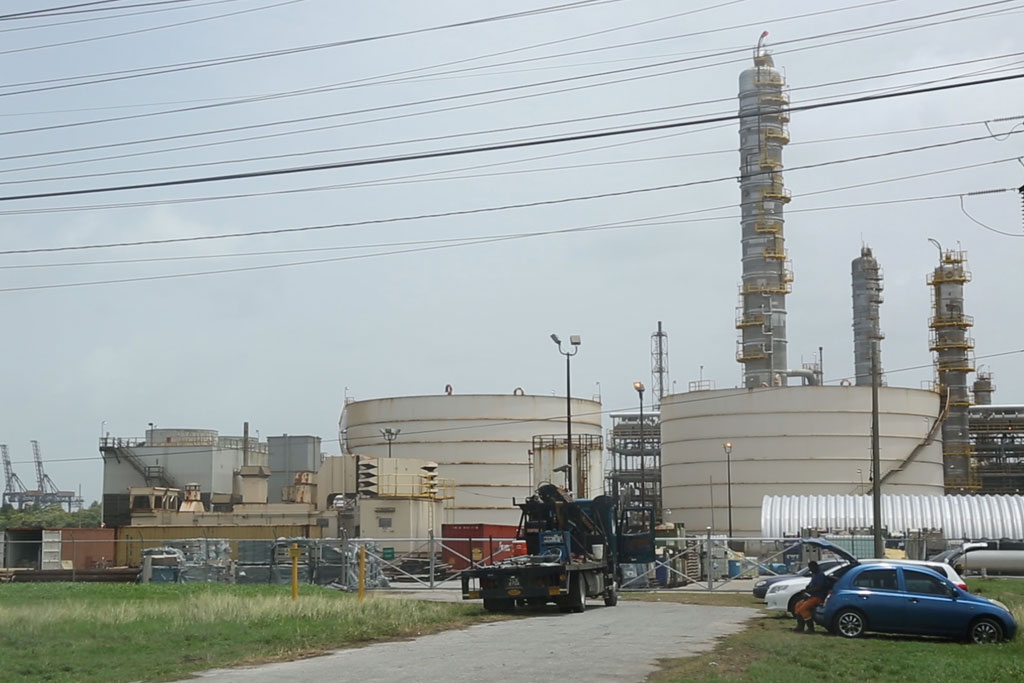 Trinidad and Tobago is the largest oil and natural gas producer in the Caribbean, with exploration taking place both on land and at sea. The country’s Government says the energy sector is integral to long-term economic growth and development. Photo: UN News/Lulu Gao

Although the twin island nation moves to the beat of calypso, soca and other pulsating rhythms, it is oil and natural gas exports which power the economy. The University of Trinidad and Tobago (UTT) estimates they account for as much as 60 per cent of gross domestic product.

The country's Director of Maritime Services, Ronald Alfred, pointed out that the sector is closely aligned with shipping.

"Trinidad and Tobago is a member of the International Maritime Organization and we do abide by all the conventions they have put forward; for example, the International Convention for the Prevention of Pollution from Ships (MARPOL).  It is actually in our national legislation, and we do have our personnel that go to ships that come to our shores and check to make sure that the vessels are compliant with these legislations, thereby doing our small part to preserve the oceans for a long time." 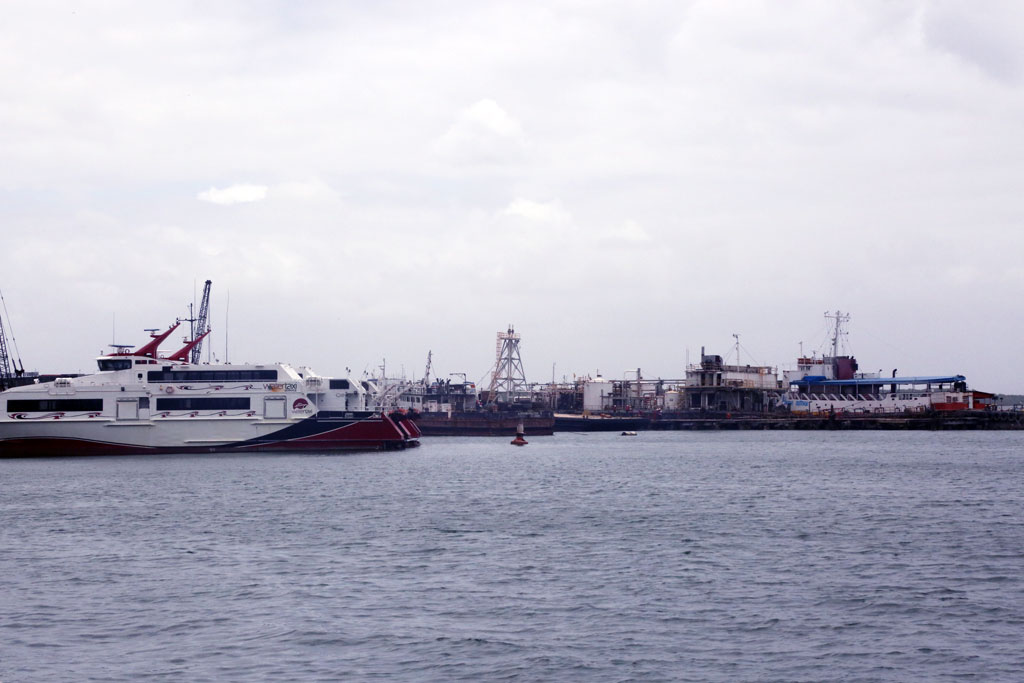 Shipping is another important sector for the Caribbean island nation. Ronald Alfred, Director of Maritime Services, explained that while in the past vessels carried sugar from Trinidad and Tobago, today they transport oil and gas. Seen here are ships in the capital, Port of Spain. Photo: UN News/Lulu Gao

However, sometimes the ship steering the economy collides with another important industry: fishing.

For the past 20 years, the group Fishermen and Friends of the Sea has locked horns with the Government over "everything that has to do with the sea and all the negative aspects," according to its president, Terrance Beddoe, a former agronomist with FAO.

"Two Sundays ago, there was a tank which held 150,000 barrels of oil. It sprung a leak at the bottom," he told UN News in late May.   "The policy makers or the people concerned said it's only 300 barrels, but we have seen this oil stretch a mile long and five miles wide in the gulf (Gulf of Paria, on Trinidad's west coast). It must have an effect on the fish."

Navigating future maritime conflicts like this will partly be up to the young people currently studying marine sciences at the UTT campus in Chaguaramas.

In Trinidad and Tobago, UN agencies promote a co-management approach to marine resources conservation which aims to drive the participation of those living in protected areas, with the goal of creating sustainable livelihoods for the local community.

Dr. Reia Guppy, assistant professor of marine sciences at the University, believes that all major activity in the country – whether in the energy sector, or fisheries and agriculture – is linked to the marine and coastal environments.

"Shipping across the globe is the largest growing industry in the world, and with the recent opening of the Panama Canal there's even more efforts for Trinidad and Tobago to be part of that hub, which means, of course, that besides user conflict with fishermen, there is also the potential for invasive species coming into our waters," she said. "So there's a host of research and interest from our Department and other environmental units within the University of Trinidad and Tobago to study the marine environment to ensure sustainable development for the country."

At times, those stakeholder conflicts can be personal or internal.

Welldon Mapp works for the Environmental Research Institute Charlotteville (ERIC), a UN-supported NGO which fosters natural resource awareness among the residents of his fishing village in north-east Tobago.

He has wrestled with the dichotomy of being a fisherman and an advocate for the sustainable management of marine resources.

"The entire thing about conservation is that when you've grown up in a family of hunters and you now realize that you have to protect what you used to use as a livelihood source, whether for food or income, and you realize that you're creating harm to it and still you depend on it," he said.

"I think it was the right time in my life for me to take a stand: to really understand what I'm taking from the natural environment, understand how it could be protected, and to fall in place where I could create a balance for myself to make me feel comfortable as a person within my community and not really creating harm but doing what I'm doing every day but creating a better benefit in the long run."

When world leaders signed off on the 17 Sustainable Development Goals, they agreed to implement a plan of action for people, prosperity and the planet, that supports the needs of both present and future generations. 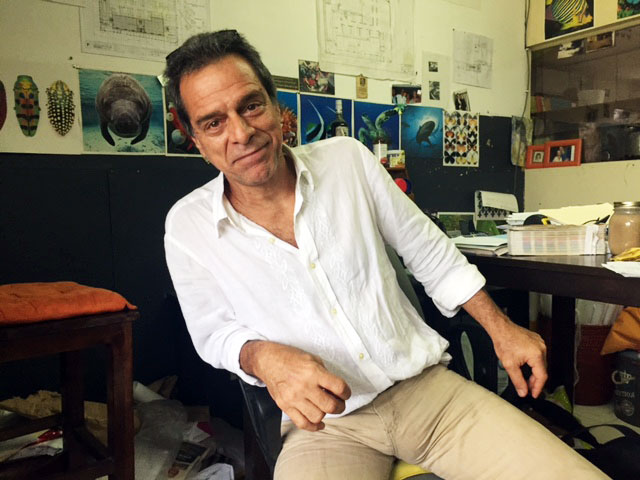 Businessman Gary Aboud is secretary of the group Fishermen and Friends of the Sea, established in the mid-1990s. A recreational fisher who was always close to nature, he was sensitized to the need for ocean conservation by veteran fishermen who were complaining about shrimp trawlers destroying the marine habitat. He said the problem still exists today. Photo: UN News/Dianne Penn

Businessman Gary Aboud is another Trinidadian who is looking at the long term.

The secretary of Fishermen and Friends of the Sea is not one to mince words, whether railing against the industry, or local politicians, or the UN.

But when asked to reflect on the ocean's importance, the firebrand turns philosophical.

"The sea is part of the planet, and I don't think the sea is more important than the land or the air. All of the eco-systems—the marine and the terrestrial—correlate and implicate each other in a homogenous mix," he stated.

"So, I think the sea is as important as the blood that beats in your mother's heart.  The sea is as important as the air that we require to breathe. We think that the sea is an abstract thing because it's 'over there.'  But I think maybe a planetary consciousness needs to shift and we need to start thinking that the things that are not apparently within our realm of influence are in fact in our realm of influence."

The vital role of the world's oceans in human well-being and development is being highlighted next month as the United Nations hosts a global conference aimed at protecting these resources.