UNICEF/Ashley Gilbertson VII
A family at home in a Roma settlement in Belgrade, Serbia.
26 May 2017
Peace and Security

Taking into account an expert panel report on alleged human rights violations by the United Nations peacekeeping mission in Kosovo, the Secretary-General has decided to establish a Trust Fund to implement community-based assistance projects, his spokesperson said today.

Among the cases reviewed by the Human Rights Advisory Panel, which examined alleged rights violations by the UN Interim Administration Mission in Kosovo (UNMIK), was a complaint submitted by 138 individuals from the Roma, Ashkali and Egyptian communities that they suffered lead poisoning and other serious health consequences as a result of their relocation to internally-displaced persons (IDP) camps in northern Kosovo.

“The assistance projects will focus on the most pressing needs of those most vulnerable communities, including with respect to health services, economic development and infrastructure,” said Stéphane Dujarric, Spokesman for the Secretary-General, in a statement.

“The Secretary-General is keenly aware of the particular plight of those individuals, as well as the other members of these most vulnerable communities who also lived in the IDP camps” and “wishes to express the Organization’s profound regret for the suffering endured by all individuals living in the IDP camps,” the Spokesperson said.

“The Secretary-General believes that it is our shared duty to support the Roma, Ashkali and Egyptian communities in Kosovo and ensure that they receive the assistance that they need,” Mr. Dujarric said, noting that the UN will make every effort, in consultation with Member States, to mobilize the necessary resources in support of the Trust Fund.

The Organization will also continue to draw lessons from its experience in Kosovo and from the work of the Panel and take action to prevent such situations from happening again, he said.

Since November 2007, the Panel has reviewed more than 500 complaints in the context of United Nations peacekeeping missions. In a number of cases, the Panel concluded that there had been failures to uphold human rights standards. The Panel completed its work on the Kosovo case and subsequently provided a final report in July 2016. 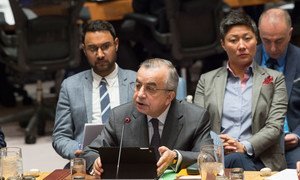 A flurry of recent intolerant and provocative rhetoric has further damaged the trust between Kosovo and Serbia – a development that must be closely watched – though the situation remains generally stable, the head of the United Nations peacekeeping mission in Kosovo told the Security Council today.