Recent elections in Kosovo reflected a strong desire for change, the head of the UN mission there, UNMIK, said in his virtual briefing to the Security Council on Tuesday.

Zahir Tanin, Special Representative of the Secretary-General, reported on the results of the 14 February legislative election, where the winning party, Vetëvendosje, received more than half the vote, amid high turnout.

SRSG Tanin at #UNSC: “The voters in #Kosovo raised their voices for breaking with the past, and I hope that the members of this Council will add their clear support for the realisation of a more peaceful, more prosperous future in Kosovo and the region.”

“The expectations expressed were for a shift in the responsiveness of a government to the real hopes and needs of its voters, for greater equality of opportunity, accountability, and the rule of law. Accordingly, expectations across Kosovo will remain as high as were the results,” Mr Tanin said.

Kosovo’s new Government is headed by Prime Minister Albin Kurti, while Vjosa Osmani, a 38-year-old lawyer, became the second woman to be named President.  Women lawmakers, who now total 43, account for roughly 36 per cent of parliament.

"Opening the door to the future requires a transformation, and changing the priorities which are reflected in both words and in deed,” he said. “Reducing tension also requires that ruling and opposition parties alike prove their capacity to cohere on wider interests.”

The UN has been in Kosovo since 1999, after the province broke away from Serbia.

Mr. Tanin said he met on Monday with Prime Minister Kurti “who assured me of his understanding of the strategic importance of advancing the dialogue with Belgrade.”  Prior to the Council meeting, he spoke to Serbian President Aleksandar Vučić who reiterated hope that dialogue should be intensified.

“I know, from my discussions in both Pristina and Belgrade, that each side is aware how central the quality of their relations will be in advancing the aspirations of their constituencies, for progress along the European path,” he said. “Only a meaningful and sincere dialogue, and forward-looking policies, will evolve these relations, and allow mutual interests to be met.”

Addressing the impact of the COVID-19 pandemic, Mr. Tanin said Kosovo has witnessed two “dramatic spikes in infections”.  The first was in November and the latest, which began in March, is continuing.

“Although additional containment measures were reintroduced, beginning just last week, the running average of new infections is reaching its highest point since the pandemic began,” he said.

A vaccination campaign began at the end of March following the delivery of 24,000 doses through the COVAX solidarity initiative.  Mr. Tanin stressed the need for increased support “given the alarming infection rates and the spread of more virulent strains of the pathogen.” 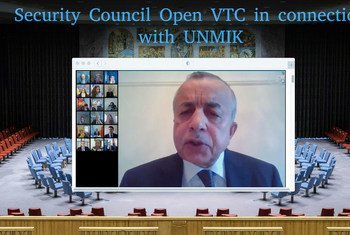 The top UN official in Kosovo, briefing the Security Council on Wednesday, called for solidarity as its new Government grapples with the COVID-19 pandemic and a host of other challenges.