FEATURE: "We invest in peace"

MINUSMA/Harandane Dick
A member of the UN Police Unit during a patrol in the Malian city of Timbuktu.
23 May 2017
Peace and Security

More than 100,000 UN peacekeepers serving around the world will be honoured this month as the United Nations celebrates the International Day of UN Peacekeepers, observed annually on 29 May.

This year’s theme – “Investing in peace around the globe” – resonates powerfully and personally with the military, police and civilian UN staff deployed in the field, often in places where peace has yet to be found.

“Every day, peacekeepers help bring peace and stability to war-torn societies around the world,” Secretary-General António Guterres said in a video message for the Day, outlining various tasks such as protecting civilians in harm’s way, promoting human rights and the rule of law, removing landmines, advancing negotiations and securing a better future in the places they are deployed.

“Now, more than ever, it is essential that we continue investing in peace around the world,” he stressed.

The communities in which UN peacekeepers serve can count on people such as Lt. Ramirez, liaison officer in South Sudan, to ensure that security is guaranteed to go about their duty:

Lt. Eduardo Francia Ramirez explains how his work as a liaison officer in the UN Mission in South Sudan is an investment for peace.

Over 120 Member States contribute uniformed personnel to 16 UN missions worldwide, which operate on a budget that is less than 0.5 per cent of global military spending. Every mission aims to save lives, prevent mass atrocities, set the stage for peace and then close.

While attention is often focused on the role of the military within UN peace operations, the part played by political, civil affairs, police, human rights and community-focused initiatives, as explained by some of the staff themselves, are equally vital.

Anna Innocenti is a human rights officer with the UN mission in Haiti:

Human rights officer in Haiti, Anna Inncenti describes the life in a peacekeeping mission and how it is an investment for peace.

To date, 54 missions have already completed their mandates and closed; two more will do so in the months ahead. Ben Zakour Man, a child protection officer with the UN mission in the Central African Republic, discusses why peacekeeping works.

Child protection officer in the Central African Republic, Ben Zakour Man tells us how peacekeeping is an investment for peace.

Peacekeeping is a partnership between the UN, Member States and regional organizations that support each other. In Somalia, for example, there is a peacekeeping mission run by the African Union, with UN support and European funding.

Alain-Pierre works for UN Support mission in Somalia. He explains why partnership is an investment for peace.

Since the first UN deployment in 1948, more than one million men and women have served under the UN flag with distinction and courage. During that period, over 3,500 of them have lost their lives in the service of peace.

Several current peacekeepers share their personal stories on why they chose to serve this noble mission. 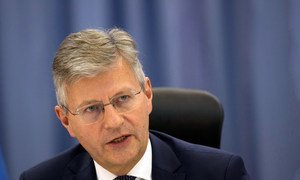 With United Nations peace operations being carried out in highly complex environments and facing multiple challenges, Secretary-General António Guterres recently stressed the need to adapt peacekeeping to “our changing world.”