With United Nations peace operations being carried out in highly complex environments and facing multiple challenges, Secretary-General António Guterres recently stressed the need to adapt peacekeeping to “our changing world.”

“Peace operations are at a crossroads. Our task is to keep them relevant with clear and achievable mandates, and the right strategies and support,” the Secretary-General told a Security Council meeting last month on the subject of peacekeeping. He also called on the 193-member General Assembly for political support and on the troop- and police-contributing countries for professional and committed personnel.

It is in this context that Jean-Pierre Lacroix took up his post as the new Under-Secretary General for Peacekeeping Operations at the beginning of April. The French national, who has more than 25 years of political and diplomatic experience, currently oversees 16 UN peacekeeping operations deployed on four continents.

UN peacekeeping missions are called on not only to maintain peace and security, but also to facilitate the political process, protect civilians, assist in disarmament, support the holding of elections, protect and promote human rights, and assist in restoring the rule of law.

UN peacekeepers go to the most physically and politically difficult environments, some making the ultimate sacrifice – as evidenced by the more than 3,500 peacekeepers who have lost their lives in the service of peace since UN deployments began in 1948.

Mr. Lacroix witnessed this first-hand when he recently visited the UN’s operations in the Central African Republic and Mali, which lost seven peacekeepers between them this month alone. In an interview with UN News, the peacekeeping chief discusses a number of issues, including the challenges facing peace operations, his plans to make them more efficient and tackling sexual exploitation and abuse. The interview has been edited for content and clarity.

UN News: UN Secretary-General António Guterres said recently that UN peace operations were at a crossroads and facing multiple challenges. Could you tell us more about these challenges?

Jean-Pierre Lacroix: Yes, we are facing challenges in our operations. At the same time, we should not forget that our peacekeepers – civilian, police, men and women, military personnel – are saving lives every day. They are protecting civilians and they are helping peace processes be implemented… It is [also] important to recognize the added value of peacekeeping and what we bring to the societies and nations that are destabilized. I think this has been recognized by the members of the Security Council when we had the debate on peacekeeping on the 6th of April.

UN News: The Secretary-General mentioned nine areas of reform for UN peacekeeping. What are your plans in the coming months to make peacekeeping operations more efficient?

Jean-Pierre Lacroix: One of the things that the Secretary-General said, and beyond the importance of pursuing political solutions which is really key, is that we have to make sure that we always have on the ground the right kind of deployment, that we optimize our resources and that the mandates are at any given moment the most adequate for the situation which we are dealing with on the ground.

We have to make sure that our mandates are evolving consistent with the needs on the ground.

One very important issue is to increase the number of female personnel – civilian, police and military. It is a question of gender parity, although parity has a long way to go, especially when we talk about military and police. But it is especially a question of efficiency because as peacekeepers we have to engage with the population and we are in a much better place to do that when we can rely on female personnel. So this is something we will be pursuing with very strong determination. 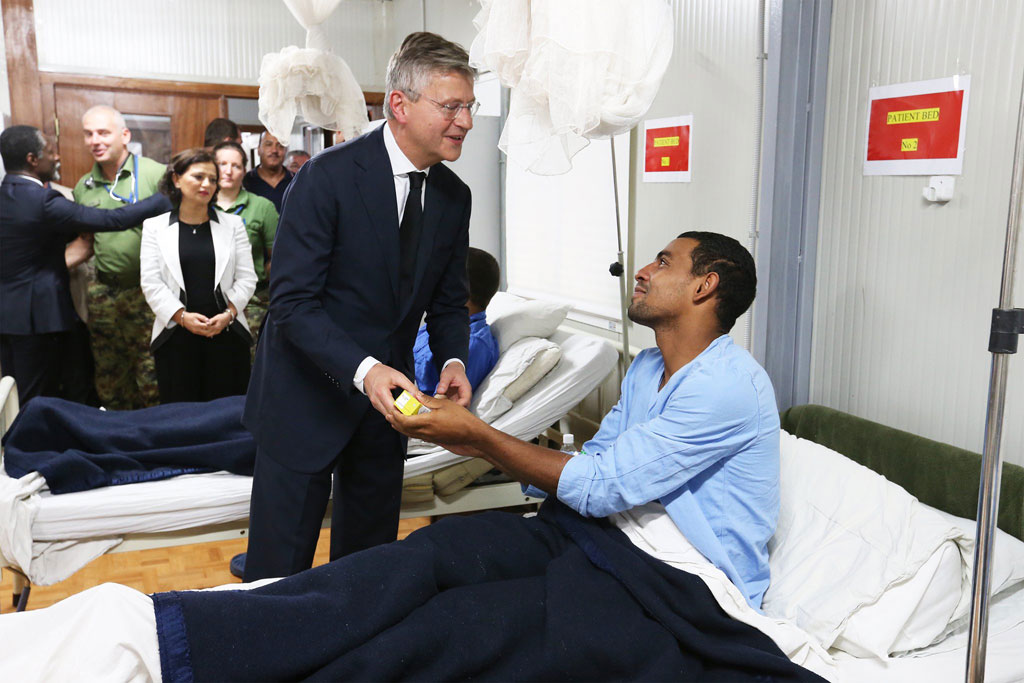 Under-Secretary-General Jean-Pierre Lacroix visits a peacekeeper injured in an attack on a UN convoy on 8 May 2017 in south-east Central African Republic. Photo: MINUSCA

I should also say a few words on partnership. This is an area which the Secretary-General has been pushing with very strong determination. We had a summit recently in April with the AU leadership and there is a lot more that we can do with both the African Union, the sub-regional organizations, and I will add the European Union as well, to basically make sure we go hand in hand when we try to find solutions to the many crises which we are dealing with.

And there are important areas where we can develop our cooperation, especially in the area of trying to find political solutions in a very concerted way, which is the right thing to do, especially when we try to deal with crises in Africa. But also, how can we support operations that are deployed by either the African Union or sub-regional organizations? We intend to very supportive of these operations.

UN News: What support do you expect from Member States to help UN peacekeeping operations deliver on the ground?

Jean-Pierre Lacroix: First of all, we need their political support… their continuous political support to peacekeeping operations – from them individually, from the Security Council, from the General Assembly. This is absolutely key if we want to succeed.

And obviously, we need their support in terms of resources. We need the finances from Member States and we need to have the right kind of resources for our operations, even though we are making a very strong and determined effort to optimize our resources, as well as to downsize and terminate peacekeeping operations whenever it is possible.

UN News: The UN has a new system-wide strategy to tackle sexual exploitation and abuse. What is UN peacekeeping doing for its part to prevent this kind of abuse?

Jean-Pierre Lacroix: We have to be extremely firm and well organized. The Secretary-General has made the fight against sexual abuse one of his top priorities and the policies and the decisions that have been made are very clear in the sense that we will really do our best to both prevent and also deal with allegations in a way that makes it clear that this determination is there. We have to be organized as well… with the help of the Special Coordinator [on improving the United Nations response to sexual exploitation and abuse], Jane Holl Lute, and with the participation of not only DPKO but other departments. 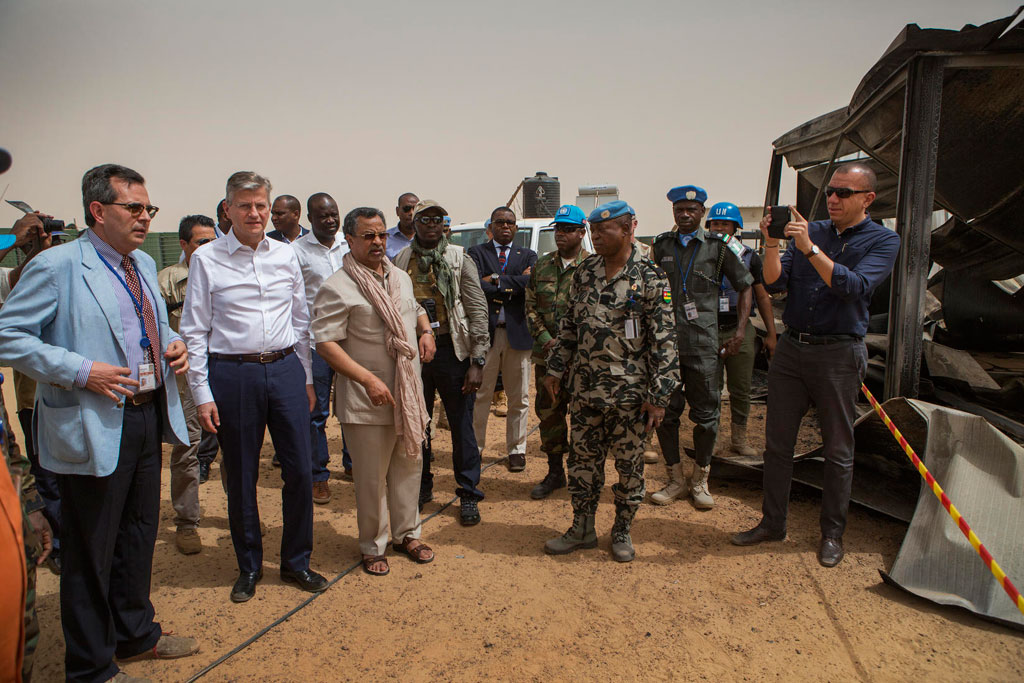 Under-Secretary-General Jean-Pierre Lacroix and Mahamat Saleh Annadif, the head of the UN mission in Mali, visit UN personnel in the Timbuktu Super Camp, which was targeted by rocket attacks. Photo: MINUSMA/Sylvain Liechti

We have organized ourselves in a way that we are more responsive and troop-contributing countries also are more responsive and much more aware of the importance of dealing with sexual abuse and exploitation. I can really see that the determination of troop-contributing countries is much stronger. So we have to make sure that we have the right kind of response on the ground. We also need to make sure we address the plight of victims and we have put in place mechanisms whereby in the field victims have within our operations someone who will be in charge of making sure that their concerns will be properly addressed.

UN News: The United Nations will celebrate the International Day of UN Peacekeepers on 29 May. What is your message to peacekeepers who sacrifice so much?

Jean-Pierre Lacroix: It’s a message of immense gratitude. They are doing a work that is extremely difficult and yet indispensable for the population they are protecting and they are serving. And they do it at immense risk.

We will continue to do everything we can to help the communities, the civilian populations, whom we are there to help and to serve.

It’s gratitude, and not only gratitude but we owe them all the support that we can give them. I think there is a sense of responsibility that we all have within the Department of Peacekeeping Operations. I can feel that very vividly. The team is very much committed, is very much aware of the conditions in which our people, our colleagues, operate on the ground and very dedicated to do their best to serve them and this is also my approach to that.

UN News: And what is your message to the communities?

Jean-Pierre Lacroix: We will continue to do everything we can to help the communities, the civilian populations whom we are there to help and to serve. Sometimes, it is extremely difficult and sometimes we don’t have enough resources to do everything we would like to do. But they can rest assured that our commitment, our determination is very strong, even when we are facing the kinds of challenges that make it difficult and sometimes it’s very challenging to protect the populations. Protection of civilians, protection of the communities in the areas where we are deployed is really our central mission. We never forget that. 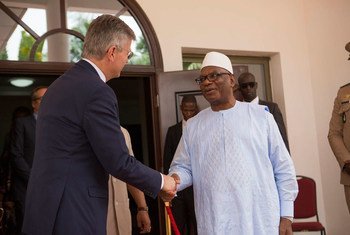 During his first working visit to Mali, United Nations peacekeeping chief Jean-Pierre Lacroix met today in the capital, Bamako, with President Ibrahim Boubacar Keita and other senior Malian officials, whom he thanked for their constructive and sustained cooperation with the UN integrated mission in the country, known by the French acronym, MINUSMA.