At Munich Security Conference, UN chief Guterres highlights need for 'a surge in diplomacy for peace'

Highlighting the complex and interlinked challenges confronting the global community that also compound the suffering of the most vulnerable, United Nations Secretary-General António Guterres called for a boost in preventive diplomacy and mediation efforts, as well as for a strategy to address root causes of such conflicts in the world.

“There are things that are obvious: the alignment of the sustainable and inclusive development with the sustaining peace agenda,” said Mr. Guterres in his remarks to the Munich Security Conference, noting also their importance in preventing conflicts.

He also drew attention to the need to address the fragility of states and to support states, institutions and civil societies to become stronger and more resilient to diminish the tendency for states to be involved in conflict situations.

Noting the centrality of climate change and strain on resources in increasing the probability of conflicts and dramatic humanitarian crises, Secretary-General Guterres called on the international community to rally behind the Paris Agreement on climate change as well as to focus attention on population growth, especially in Africa.

“And for me, a key condition to address it is the combination of education and the empowerment of women and girls,” he said, noting: “This is probably the best way to be able to address the problems of excessive population growth that is impacting dramatically in some parts of the world.”

Further in his remarks, the UN chief noted the need for strengthened global multilateralism and the need for responsive reform to enhance confidence and capacity of multilateral institutions to better respond to global challenges and to meet the expectations of the world's peoples.

In the case of the UN, the Secretary-General noted that the organization has been engaged in reforms to its peace and security strategy, operational setup and architecture; its development system; and its management.

Also in his address, Mr. Guterres said that while the world prepares for responding to the crises it faces today, it is equally important that it is prepared to deal with new dimensions and problems of peace and security it could face in the future.

Noting the already existing challenges related to cyberspace and lack of mechanisms to address those, the UN chief highlighted that development of a analytical capacity and governance models for new areas of scientific and technological development, such as artificial intelligence and genetic engineering will be crucial in the days to come.

“I believe that when people will meet herein 10 or 20 years' time in Munich, we will probably be discussing other things in relation to the priorities of today, but I hope we don't get to those discussions too late and [having done] too little,” he said.

♦ Receive daily updates directly in your inbox - Subscribe here to a topic.
♦ Download the UN News app for your iOS or Android devices.
multilat 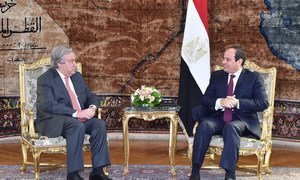