FEATURE: Diplomacy of the conscience – The Holy See at the United Nations

UN Photo/Loey Felipe
The flag of the Holy See flying at the United Nations headquarters in New York.
7 February 2017

Ever since 1964, when it was informally accepted to the United Nations General Assembly, the Holy See has had a permanent seat at international discussions and used its observer status to go on record about matters of peace and human dignity.

“We consider the United Nations not only important but in itself very useful for humanity,” Archbishop Bernardito Auza, Apostolic Nuncio and Permanent Observer of the Holy See to the United Nations, told UN News.

He went on to say: “The Holy See, the Catholic Church itself, appreciates and considers the United Nations a very important institution for all the nations to come together and discuss problems and even enjoy together what is common.”

The priorities of the Holy See for the year are similar to key UN goals – among them, the quest for peace, providing assistance to migrants and refugees, and nuclear disarmament.

The Holy See is a nearly 2,000-year old term that refers to the international sovereignty of the Pope, or leader of the Roman Catholic Church. The Vatican City State is the geographic property that ensures that sovereignty.

This makes the Holy See the only religious entity represented among the 193 UN Member States and Palestine, the other non-member observer state.

What’s more, in a diplomatic world where Member States wrangle for a seat on the Security Council or a senior UN job, the Holy See turned down an opportunity for GA Membership in 2004, when Switzerland, the only other Permanent Observer state at that time, gained full membership.

“That was a very hard decision to make. Saint John Paul II was already very sick at the time, in 2004. I remember very well. It was he himself who took the decision that we should remain as a Permanent Observer state,” the Archbishop recalled. “The fundamental reason is that so that we could remain neutral.”

Holy See: We consider the UN in itself "very useful for humanity" - Archbishop Bernardito Auza

Religion as justification for killing

In the Democratic Republic of the Congo, when President Joseph Kabila refused to step down after his second term expired on 19 December 2016, people took to the streets. The demonstrations turned violent.

On New Year’s Eve, political leaders reached an agreement – mediated by the Catholic Church, specifically by the National Episcopal Conference of Congo (CENCO) – under which presidential elections would be held by the end of 2017, and President Kabila would relinquish control. If successful, this would be the country’s first peaceful transition of power since its independence in 1960. 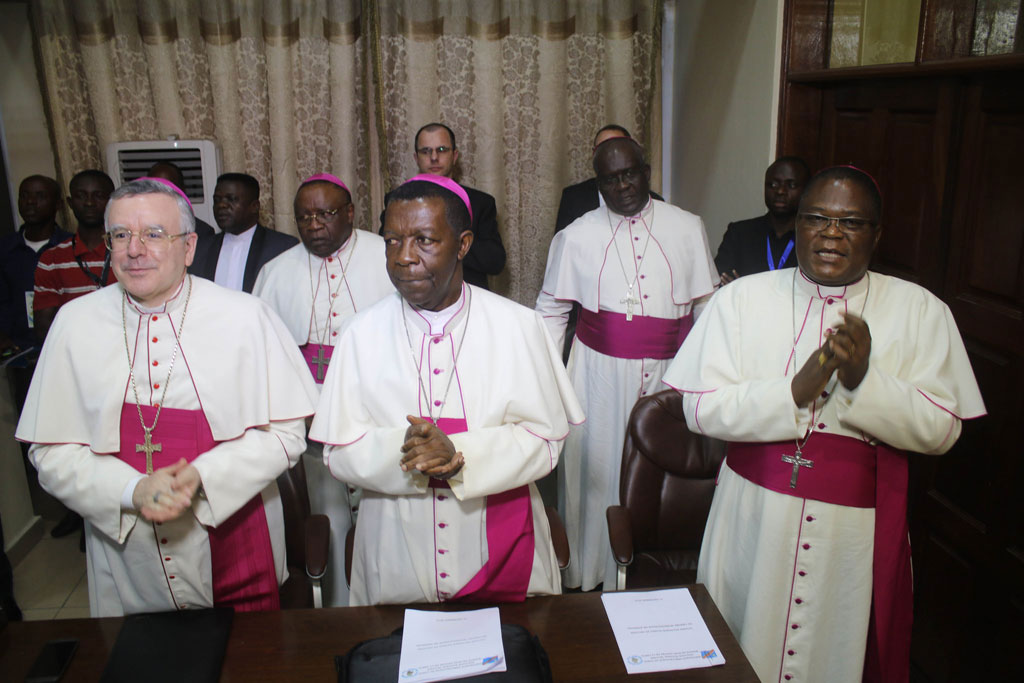 “The United Nations has been very appreciative of what the Bishops were able to achieve,” Archbishop Auza said, adding that bringing the parties together and mediating avoided “chaos and possible bloodshed in the whole country.”

The Holy See is also active in helping to resolve conflicts in Colombia and Venezuela, where Pope Francis was asked to help mediate in difficult political situations, the Archbishop said.

In Burundi, Mozambique and the Philippines, the Church is active mediating conflicts that pit different religious groups against each other: “The Catholic Church is playing a major role in trying to remedy the impression that religion is a cause of all these conflicts, and also to help other religious leaders understand that their role is very important in trying to prevent wars, conflicts or violence.”

Within the UN, the Holy See delivers its messages by addressing the Security Council, the General Assembly and at special events.

For example, in 2014, the Security Council adopted resolution 2178, condemning violent extremism and urging measures preventing travel related to and support for the Islamic State of Iraq and the Levant (ISIL) and other foreign terrorist fighters. Cardinal Pietro Parolin, the Holy See’s Secretary of State, told the Council at the time that in order to counter terrorism, people and countries must achieve social justice for all and mutual cultural understanding. 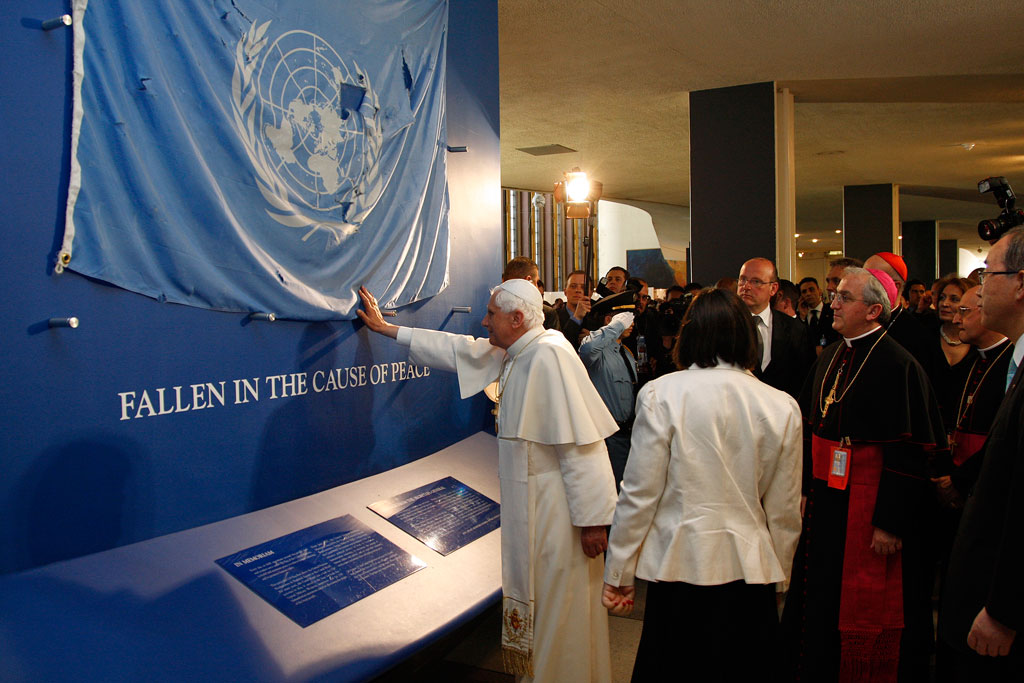 During a visit in 2008, His Holiness Pope Benedict XVI touches the United Nations flag removed from the ruins of the United Nations Headquarters in Baghdad during the 2003 bombing attack, in remembrance of the injured and those who died. UN Photo/Evan Schneider

“The Holy See – which is a sovereign international subject that also represents a world faith community – affirms that people of faith have a grave responsibility to condemn those who seek to detach faith from reason and ‘instrumentalize’ faith as a justification for violence,” Cardinal Parolin said.

Member States of the General Assembly understand the importance of working with religious leaders on international issues. In 2010, the Assembly designated the first week of February every year as World Interfaith Harmony Week. It aims to spread “the message of interfaith harmony and goodwill in the world’s churches, mosques, synagogues, temples and other places of worship during that week, based on love of God and love of one’s neighbour or on love of the good and love of one’s neighbour, each according to their own religious traditions or conviction.”

According to Assembly resolution A/RES/65/5, Member States recognize that the moral imperatives of all religions, convictions and beliefs call for “peace, tolerance and mutual understanding.”

The Holy See has voiced deep concern about the violent use of atomic energy since 1943. Watch Archbishop Auza’s call for nuclear disarmament.

Archbishop Bernardito Auza of the Holy See: Nuclear disarmament is one of the priorities for the year

The tight rope of forced migration

Arguably, no issue has been more polarizing in recent years as the movement of migrants and refugees. Around the world, more than 65 million people are displaced – the greatest number since the Second World War. A record number of migrants and refugees died in the Mediterranean Sea just this winter, the UN Children’s Fund (UNICEF) announced on Friday.

Archbishop Auza expressed great concern about people forced to flee their homes and about how “societies or nations will just close their eyes or borders to them without doing anything.” 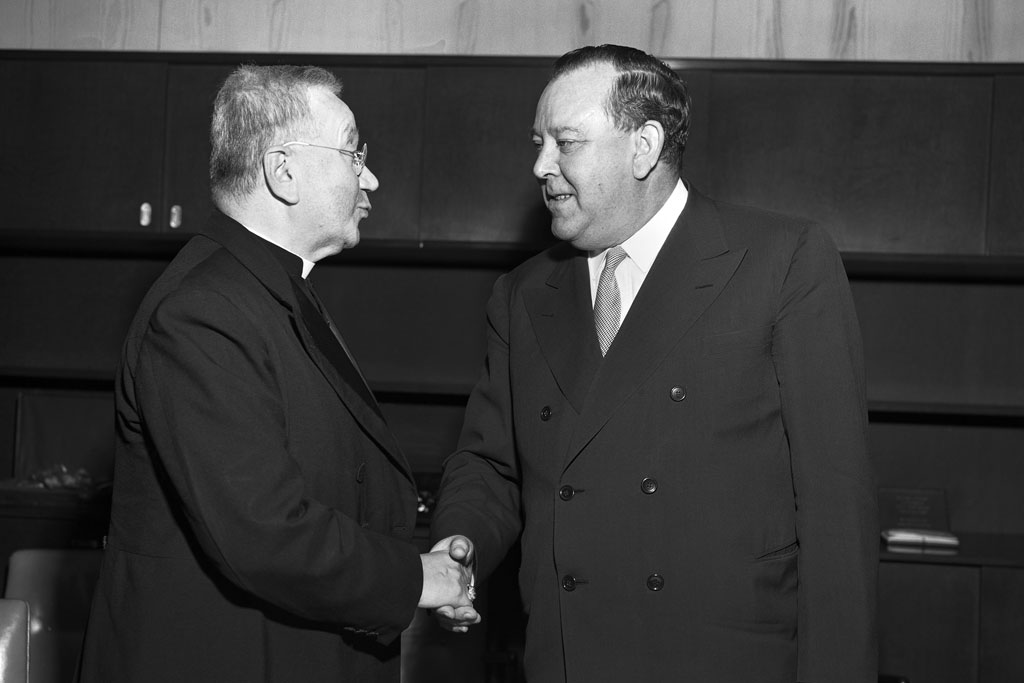 In the first official visit of a Vatican representative to United Nations Headquarters, Archbishop Amleto Giovanni Cicognani, signed the UN Convention Relating to the Status of Refugees. The Holy See was the 17th signatory to the convention, which was adopted in July 1951 by a plenipotentiary conference convened at the direction of the General Assembly. Pictured, Archbishop Cicognani (left) with UN Secretary-General Trygve Lie. UN Photo/MB

“The Holy Father explicitly asked me while I was in Rome last month actively to engage in the coming inter-governmental negotiations towards a global compact for safe, orderly and regular migration,” the Archbishop said of the international agreement expected to be adopted in 2018, which will set out a range of common principles and agreements among Member States on international migration.

The compact was launched with the adoption of the New York Declaration for Refugees and Migrants by a UN summit on 19 September 2016. The next discussions are expected to be held in March in Geneva as part of the UN International Organization for Migration’s (IOM) International Dialogue on Migration.

Seasoned in diplomacy, the Holy See is aware of the issues surrounding migration and the challenges some Member States have in aiding refugees and migrants.

“It’s sad that we are noticing a rise in a certain type of nationalism – even a certain xenophobia,” Archbishop Auza said, adding that migration “is also being used as a tool for some political parties to gain power.” 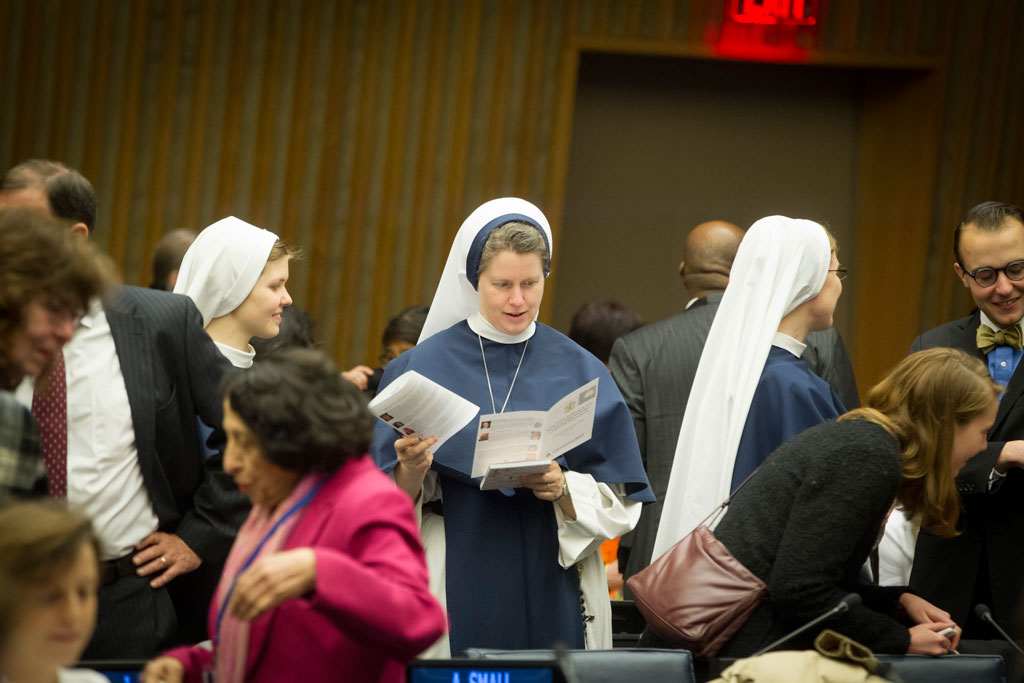 “We understand that migration has negative aspects. As the Holy Father has said, I also appeal to the migrants to respect the cultures and the lives and society of those people who receive them. So it is two-way traffic,” he added.

On issues of migration, as with any other issue, the Holy See offers Member States “orientation and spiritual inspiration,” as stated on the Holy See Mission’s website, as opposed to political support or material aid.

“Simply because we may not agree on a particular issue, we do not disrespect one another,” the Archbishop said of working with Member States, the UN Secretariat and its agencies. “We continue to work together. We continue to be friends. We continue to collaborate while respecting and acknowledging the differences.”

This story is part of a feature series that examines the roles that world religions have at the United Nations and in international diplomacy.

♦ Receive daily updates directly in your inbox - Subscribe here to a topic.
♦ Download the UN News app for your iOS or Android devices.
diplomacy

UN pushes for more preventive diplomacy ahead of high-level meeting

In a message to an event spotlighting the growing challenges of anti-Muslim discrimination as well as hatred in various contexts, United Nations Secretary-General António Guterres appealed today for drawing strength from the principles of inclusion, tolerance and mutual understanding to recognize the value of diversity.