In a message to an event spotlighting the growing challenges of anti-Muslim discrimination as well as hatred in various contexts, United Nations Secretary-General António Guterres appealed today for drawing strength from the principles of inclusion, tolerance and mutual understanding to recognize the value of diversity.

“Discrimination diminishes us all. It prevents people – and societies – from achieving their full potential,” said Mr. Guterres in a video message to a high-level event on combating anti-Muslim discrimination and hatred.

“In times of insecurity, vulnerable communities that look different become convenient scapegoats,” he added, calling on everyone to resist cynical efforts that try to divide communities and “portray neighbours as 'the other'.”

Further, noting that anti-Muslim hate crimes, xenophobia, racism, anti-Semitism and other forms of bigotry are on the rise, the UN chief said that many people are victims of intolerance and suspicions that may not appear in statistics, these none the less degrade people's dignity as well as that of the common humanity.

He also underlined the need people everywhere feel for their cultural identities to be valued – and at the same time to have a strong sense of belonging to the community as a whole, and said that as societies become more multi-ethnic and multi-religious, cultural and economic investments in cohesion are required, so that diversity is rightly seen as a richness, not a threat.

The high-level event was organized by the Permanent Missions of Canada and the United States to the UN and the Delegation of the European Union and the Organization of Islamic Cooperation.

In his message, Mr. Guterres also highlighted the Organization's Together campaign, an effort to promote respect, safety and dignity for all.

Together, let us transform fear into hope,” he concluded. 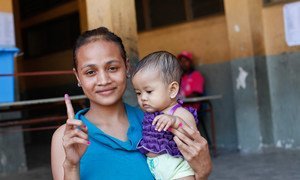