UN Photo/Loey Felipe
Ever since 1964, when it was informally accepted to the United Nations General Assembly, the Holy See has had a permanent seat at international discussions and used its observer status to go on record about matters of peace and human dignity. 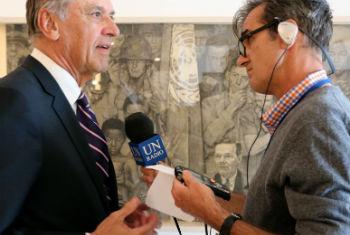 The dreams and aspirations of the people of the world and the role of diplomacy are being celebrated in a drawing that is being exhibited at the UN in New York; that’s according to the Deputy Secretary-General of the organization.

Jan Eliasson was speaking ahead of the opening of an exhibition of paintings and drawings by the American artist, Norman Rockwell.

One of his most famous sketches is called the United Nations, which he based on the work of the Security Council.

Daniel Dickinson has been speaking to Mr Eliasson at the exhibition.

The United Nations today further highlighted the need for preventive diplomacy to nip crises in the bud before they become more intractable and deadly, as it prepared for a high-level discussion next week to enhance the tools at hand.
UN Photo/JC McIlwaine
Secretary-General Ban Ki-moon is calling on the world community to reinforce preventive diplomacy which, through a system of early warnings and skilled interventions, can pre-empt conflicts before they erupt, saving both lives and national resources.

The Conference on Interaction and Confidence-Building in Asia (CICA), which brings the region’s nations together to discuss wide-ranging issues, has a key role to play in addressing threats to peace and development, Secretary-General Ban Ki-moon said today.

A mediation team with some of the world’s leading experts in ceasefires, transitional justice, power-sharing and constitutional arrangements is now on standby to help resolve crises around the world, the United Nations’ top political official announced today.