MINUSMA
Injured being being medivac from a MINUSMA camp in Aguelhok, Kidal region of Mali.
24 January 2017

The United Nations Security Council and the UN Multidimensional Integrated Stabilization Mission in Mali (MINUSMA) today condemned an attack in the country's restive northern region of Kidal, which left one 'blue helmet' dead and two others seriously wounded.

According to the Mission, several mortar shots hit the MINUSMA camp in Aguelhok on Monday afternoon, killing a UN peacekeeper from Chad.

MINUSMA interim chief Koen Davidse strongly condemned the attack and expressed sincere condolences to the family of the deceased and wished a speedy and full recovery to the wounded.

Mr. Davidse reiterated that the attacks on MINUSMA will not weaken the mission's determination to fully implement its mandate to support the efforts of the Malian Government, the signatories of the Peace Agreement and the Malian people to achieve lasting peace and stability.

“This attack marks a dark and violent period in Mali. The criminal and bloody attacks of the last few days show that terrorism targets, without discrimination, the peace camp. I wish to express our gratitude and solidarity to the families of the many victims,” he stated.

In a statement from the Security Council later in the day, the 15 members called for a swift investigation into the attacks and for bringing the perpetrators to justice.

“Attacks targeting peacekeepers may constitute war crimes under international law,” they said, reiterating full support for MINUSMA and French forces that support it. 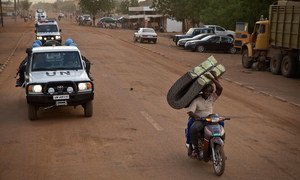