UNICEF/Moohialdin Fuad
A group of internally displaced women stand in the Tharawan IDP camp on the outskirts of Sana’a, Yemen. (file)
18 January 2017

Highlighting the plight of migrants from the Horn of Africa arriving in Yemen – which itself has seen more than 2.1 million people internally displaced due to ongoing conflict and the resulting humanitarian crisis – the United Nations migration agency has called for additional support for the vulnerable.

According to the International Organization for Migration (IOM), up to 12,000 migrants, every month, are arriving onto the shores of the Gulf of Aden country with hopes of making their way to Saudi Arabia.

Furthermore, the Office of the UN High Commissioner for Refugees (UNHCR) had reported that, as of mid-November 2016, some 105,971 people – migrants, asylum-seekers and refugees – had arrived in Yemen from the Horn of Africa. Most of those coming were from Ethiopia (88,667) and Somalia (17,293). Women and children were at particular risk of sexual violence and human trafficking.

Among its efforts to support both the internally displaced as well as migrants in Yemen, IOM has been running direct assistance programmes for displaced children, providing them with psychosocial support to ease the stress and effects of the conflict.

It has also been running health clinics as well as operating mobile health teams in various locations in the country to deliver primary health care and provide referrals. These clinics also provide psychosocial support to those suffering from displacement and war traumas.

In the midst of the situation in the conflict-affected country, a high-ranking IOM delegation recent visited Yemen to take stock of the conditions on the country.

Speaking on the significance of the visit, IOM Regional Director for Middle East and North Africa, Carmela Godeau, said: “It is of utmost importance for IOM to understand the prevailing situation in the country, to help IOM at the global level to advocate for more assistance to the people suffering in Yemen.”

The delegation also visited a settlement of displaced Yemenis in the capital Sana'a and met with organizations working to support them as well as held meetings with authorities.

The agency said that the meetings led to a broader understanding of the situation, which in turn will facilitate preparations of its action plan for 2017. The visit also came ahead of the official launch of the UN Humanitarian Response Plan for the country, on 8 February 2017 in Geneva.

The delegation's visit to Sana'a was followed by a visit to the Saudi capital, Riyadh, where the head of IOM's operations in Yemen, Laurent de Boeck, briefed officials and the donor community on IOM activities in Yemen. 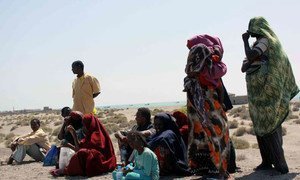 Highlighting a dramatic increase in sea crossings by migrants and refugees from the Horn of Africa to Yemen – which itself is reeling under a deteriorating humanitarian crisis, the United Nations refugee agency today called for urgent steps to deter and save people from the deadly risks they are taking.