“Fifteen million children in Yemen are asking you to save their lives” the head of the UN Children’s Fund (UNICEF) told the 15 members of the Security Council on Wednesday, in an impassioned plea for action to end four years of fighting which has left at least 7,300 children killed or seriously injured.

“These are verified numbers. The actual numbers are no doubt higher”, said Henrietta Fore, who began her address with a quiet intensity, telling the horrifying but tragically now mundane story of how one classroom was shattered by shrapnel last month in the capital Sana’a: “Imagine the pain endured by the families of the 14 children who never made it home...In any conflict, children suffer first. And worst.”

Each day, as a Yemeni Government coalition fights for control of the country against Houthi rebel forces, “another eight children will be killed, injured or recruited”, she said, with a child dying from a preventable cause, every ten minutes.

Around 360,000 suffer severe acute malnutrition, and half of Yemeni children under-five – or 2.5 million – have stunted growth, an irreversible condition. More than two million are out of school: “In short, the systems that every child and family needs, are failing”, said the UNICEF chief.

How long will we allow Yemen to ‘slide into oblivion?’

“Mr President, we are at a tipping point. If the war continues any longer, the country may move past the point of no return...How long will we continue allowing Yemen to slide into oblivion?”

Teams are working “round the clock” she added, treating 345,000 severely malnourished children last year, delivering safe drinking water to more than five million every day, and providing cash assistance with partners, for nearly nine million of the most vulnerable.

“But this work only addresses the symptoms of the catastrophe in Yemen. To truly shape a better future for Yemen and its children, we need your engagement and influence to end this war on children. Now.”

Ms. Fore called for a redoubling of support for the efforts of the UN Special Envoy to “reach a negotiated political solution, one that places children first”.

UN Photo/Manuel Elia
Martin Griffiths, Special Envoy of the Secretary-General for Yemen, briefs the UN Security Council on the situation in the country. (15 May 2019)

Addressing the Council at the beginning of the meeting, Special Envoy Martin Griffiths congratulated the head of the UN Mission to Support the Hudaydah Agreement (UNMHA) for achieving a crucial breakthrough in recent days, in line with the fragile Stockholm peace accord between the warring parties of last December.

The Houthis have withdrawn in a “fully compliant” manner, from the three key Red Sea ports of Hudaydah – the crucial gateway for most of Yemen’s humanitarian and other imports – plus nearby Saleef and Ras Issa, said Mr. Griffiths.

Now, “concrete actions” must follow in terms of redeployments on the other side, and the UN allowed a bigger role in the ports or the Agreement “will remain in a precarious situation”. Mr. Griffiths said the country “remains at a crossroad between war and peace” with conflict intensifying elsewhere.

Only a resumption of full political negotiations, after a three-year hiatus, can bring the kind of comprehensive solution that Yemen needs. “These negotiations will require patience, good faith, and of course, concessions that go beyond what we have seen before” he added.

“The ease with which progress could be removed is frightening”, he warned, calling on Council members to “urge the parties to work quickly” with General Michael Lollesgaard, who heads UNMHA, on further troop withdrawals.

“These beginnings must be protected from the threat of war. We must now allow war to take peace off the table”, he concluded.

The UN Emergency Relief Coordinator Mark Lowcock, told members that ten million were still in need of emergency food assistance, while the “spectre of famine still looms”. Cholera has affected 300,000 this year alone, compared with 370,000 during the whole of 2018.

The fighting continues to affect the aid operation, with humanitarians now relying “on a patchwork of back roads and mounting passes, often going through insecure areas with numerous checkpoints.” More than 900,000 civilians were impacted by aid access restrictions, said the OCHA chief, in February and March alone.

Despite the myriad problems of access, continued fighting and the risks of environmental disaster if the Safer oil tanker wreck off the Red Sea coast were to rupture or explode, the UN aid operation is still continuing to deliver, he told the Council.

In March, the World Food Programme (WFP) fed 10.6 million, “more than in any previous month. In April, a cholera vaccination campaign reached 1.1 million in Sana’a”. Mr. Lowcock said beyond the first goal to “keep people alive” OCHA was now beginning “to see more positive sustained outcomes”. A year ago, 107 districts were at risk of famine, but today, “the food and nutrition situation has improved in more than half of those districts” with 20 per cent of them, no longer at risk at all.

Finally, he said more funding was urgently needed from around the Council’s iconic horseshoe table, and beyond. “We again call on all our donors to fully disburse the pledges made in Geneva in February. I am looking forward to travelling to Riyadh next week to meet Saudi and Emirati officials and finalize arrangements for the joint pledge of $1 billion they made in Geneva”. 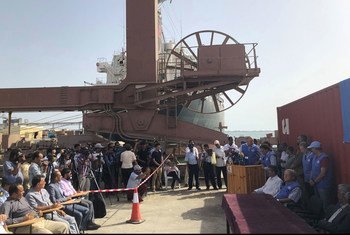 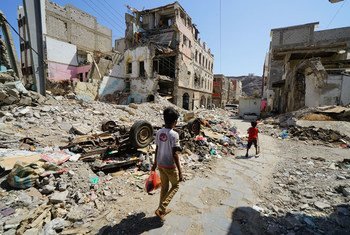