OCHA/Z. Nurmukhambetova
Many communities in Central Asia, like Gorno-Badakhshan Autonomous Province in Tajikistan are prone to disasters such as flooding and mudslides. The UN is working with the Government to develop a country-wide disaster-resilience strategy.

As the United Nations Climate Conference under way in Marrakech, Morocco, (COP 22) is discussing implementation of the Paris Agreement, the UN is also seeking to build climate resilience through the Secretary-General Ban Ki-moon’s resilience initiative called A2R (Anticipate, Absorb, Reshape), launched a year ago.

In the past two decades, 4.2 billion people have been affected by weather-related disasters such as floods, droughts and storms.

The landmark Paris Agreement has raised the profile of climate resilience. There is now a global goal for climate adaptation and it is recognized that adaptation represents a challenge with local, national and international dimensions.

The objective of the Secretary-General’s Initiative on Climate Resilience, a global UN-led, multi-stakeholder initiative, is to accelerate action under its three pillars: anticipate climate hazards and stresses; absorb shocks; and reshape development pathways to foster climate resilience.

The initiative was launched in late November 2015 in Paris during the previous Conference of Parties to the UN Framework Convention on Climate Change (UNFCCC), known as COP 21, and it brings together governments, international agencies, regional initiatives, the private sector, civil society and academia.

Tondikorey’s village chief sits in his garden near the shore of the Niger river. The year's millet harvest was partly destroyed due to the impact of a bug but thanks to the new irrigation system allowing for a second harvest, the chief is confident that his village will get by. Photo: OCHA/Ivo Brandau

The UN News discussed the issue of climate resilience with Maarten Van Aalst, Director of the Red Cross Red Crescent Climate Centre, who moderated a panel discussion at COP 22 on how countries can adjust their financial decision-making to build climate resilience.

UN News: Resilience seems to cover a wide range of issues. What does the A2R initiative try to accomplish?

Maarten Van Aalst: We all know that the climate is changing, risks are rising. We are seeing more disasters around the world and at the same time we have a growing [global] population to feed. We want to get rid of extreme poverty and the place where all these global ambitions meet is actually this concept of resilience, making sure people can cope with shocks and stresses and can actually thrive to a good development even in a changing climate.

What A2R is trying to do is to bring together all the good initiatives that are trying to work on that around the world. There are local Mayors that want to try to keep their cities safe and their citizens in the city prepared for disasters, safe from flooding. It is about working with companies that are looking at their supply chains. It is about looking at national plans that governments are making to adapt to a changing climate.

And then it is about bringing all of that together into something that becomes a global ambition. Again, this is global ambition that links to what has already been expressed last year in all these global agreements, the Sustainable Development Goals (SDGs), the Paris Agreement, and the Sendai Framework for Disaster Risk Reduction. Later on, we had a discussion at the World Humanitarian Summit about how to deal with the increasing burden of disasters and conflicts.

Men from the Koloma IDP camp in Goz Beida, Eastern Chad, build a shelter for a generator that the community has purchased in order to pump water through an water system built by Oxfam and handed over to the IDP committee in 2012. Photo: OCHA/Pierre Peron

All of these goals have already been expressed, and A2R brings all these great initiatives together. It also shows that we are making progress on these agendas. And it is especially important in the Paris Agreement which, on the one hand, commits the world to reducing greenhouse gas emissions, so that risk does not get out of hand in the second half of the century; and on the other hand, it also commits us to building resilience to cope with the risks that are already changing today and will continue to change. So A2R brings together all the stakeholders and makes it visible that we are making progress.

Maarten Van Aalst: If you look at the implementation of the Paris Agreement, everyone is now talking about the need to reduce greenhouse gas emissions. Whereas in the Agreement itself, there are actually two big global goals, one is mitigation and the other is adaptation, dealing with the rising risks. And if you look at the most vulnerable countries, their primary concern is actually those risks right now.

And part of the deal that was struck in Paris is actually that the [most vulnerable countries] get support, that we are standing together as a global community and that we will help them. It is not just a matter of small projects that come from financing instruments negotiated in the UN. This is something we need to do all together, and what the UN Secretary-General has tried to do with A2R is to galvanize all these initiatives, make them visible, promote them but also ensure that they get the support they need.

UN News: How will the necessary resources be mobilized?

Maarten Van Aalst: The resources are of two kinds. One part is the increased resources from the global community. This is the sort of financing mechanism we are also discussing here in Marrakech, the Green Climate Fund; the existing development finance.

The second part of it is doing all the things we already do better and smarter. There are trillions (of dollars) of investments made every year and a lot of that frankly is not made in the smartest way. We are building infrastructure in places where we know there is a high risk of it getting washed away. We are doing agriculture in ways that we know put it at risk to floods and drought.

So if we can be smarter with the investments we are making, we can make a lot of progress on resilience without necessarily needing a lot of additional international finance. 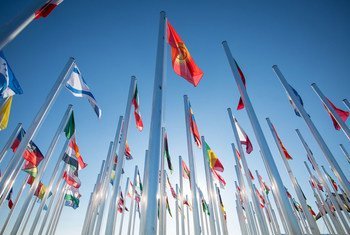 15 November 2016
Ten days after the entry into force of the Paris Agreement on climate change, world leaders showed strong support for the implementation of this agreement at the opening of the high-level segment of the United Nations Climate Conference in Marrakech, Morocco, (COP 22) today.