UNICEF/Roger Lemoyne
On 9 October 2016 in Les Cayes, Haiti, several hundered people who have lost their homes shelter in a neighbourhood high school. UNICEF has installed a water bladder on the grounds of the school.
10 October 2016

Secretary-General Ban Ki-moon today announced the launch of a near $120 million appeal to fund United Nations aid activities in the aftermath of Hurricane Matthew in Haiti, where the rising death toll coupled with the start of the rainy season has prompted the UN Children’s Fund (UNICEF) to sound the alarm on the threat of waterborne diseases to children living in the worst-affected areas.

“Hundreds have died. At least 1.4 million people need assistance at this time. Some towns and villages have been almost wiped off the map. Crops and food reserves have been destroyed. At least 300 schools have been damaged, Mr. Ban told reporters at UN Headquarters today, express his deepest condolences and sympathies to those affected by the hurricane.

He said the numbers of those impacted and the needs are growing as more affected areas are reached. Moreover, tensions are already mounting as people await help. “A massive response is required,” he said, adding that UN teams are working with local officials to asses s needs.

“Today in Geneva, we launched a $120 million flash appeal covering the UN system’s nee ds for the next three months,” the Secretary-General announced, recalling that this past Friday, the UN Centra l Emergency Response Fund (CERF) allocated $5 million in emergency funds to kick-start assistance in the wake of the deadly stor m, following the release earlier in the week of a loan of $8 million dollars to the UNICEF to scale up response to the worsening cholera epidemic in Haiti.

The so-called Flash Appeal , launched by the UN on behalf of the international humanitarian community, requests $119,850 to respond to “the most urgent needs” of people impacted by the storm, which ma de landfall in Haiti on 4 October and went on to leave a swath of devastation throughout the Caribbean and the South-east ern United States.

According to the UN Office for the Coordination of Humanitarian Affairs (OC HA), the appeal targets vulnerable groups in identified priority sectors, and it takes into account the national-level c apacities and those of humanitarian partners on the ground. Over the next week, partners will develop individual projects in suppor t of sector activities and financial requirements identified in this appeal, adapting the response to the most up- to-date assessment results.

In a separate statement today, UN Emergency Relief Coordinator Stephen O’Brien stressed that funding of t he appeal is urgently needed to enable humanitarian actors to respond to people most in need be fore the situation further deteriorates, including by addressing the risks posed by cholera and other deadly waterborne disea ses.

“Families th at were fortunate to survive the hurricane now find themselves in a struggle to survi ve, with thousands of homes and livelihoods washed away by the storm,” he said, recalling that the country was al ready facing health challenges, including an increase in cases of cholera as well as severe food insecurity, bef ore the hurricane hit.

‘We are in a race against time,’ warns UNICEF, fearing rapid spread of di seases

Mr. Ban went on to note that he is developing a new approach to the cholera situation, which will encompass support for people affected by the disease and for efforts to build sound water, sanita tion and health systems in order to help eliminate cholera in Haiti. This disaster makes it even more vital to significantly s tep up our support and to do so right now, he stressed.

“The United Nations is mobilizing across all fronts to support the people , the Government and local groups such as the Red Cross in getting recovery under way as quickly as possible. I call on the internat ional community to show solidarity and generosity – and to work together effectively in responding to this emergency,” state d the Secretary-General.

Meanwhile, UNICEF has warned that overflowing rivers, stagnant waters, and anim al and human corpses are perfect breeding grounds for waterborne diseases. “Every day that goes by increases t he threat of cholera. We are in a race against time to get to these children before diseases do,” Marc Vincent, UNICEF Re presentative for Haiti, said in a press statement .

Even before the hurricane in Haiti, UNICEF noted that only one in three people had access to proper latrines and less than three in five to safe water. In rural areas, these rates go down to one in four for sa nitation and one in two for water. Diarrhoea is one of the main killers of children under-five in the country.

“Haiti has one of the highest incidence rates of cholera in the world,” underscored Mr . Vincent. “Almost 10,000 people have died from the disease since 2010 and more than 27,000 suspected cas es have been reported so far this year, an estimated one in three of them children,” he added.

Since the 2010 outbreak, UNICEF, in partnership with the Haitian government and va rious partners, has been fighting waterborne diseases – including cholera – by improving access to water, sani tation and health services for Haitian children and their families, while promoting rapid response to cholera cases.

From that time until now, UNICEF has established or maintained 1,270 oral rehydrati on points and 149 cholera treatment units in high-risk areas where nearly 140,000 suspected cases were treated. In June an d July of this year alone, the agency responded to more than 1,000 cholera alerts in all 10 departments of the country, benefit ing about 8,000 households.

“With the hurricane’s devastating impact on an already fragile system, UNIC EF will continue to scale up its cholera response and address the emerging water and sanitation needs,” vowed Mr. Vincent, n oting that key components of UNICEF’s immediate response include acquiring water purification table ts, treating collective water sources, and setting up latrines in temporary shelters and informal settlements.

In the midst of the crisis, pregnant women are also among some of the most vulnerabl e, the UN says.

According to the UN Population Fund (UNPFA), some 8,400 women are expected to give birth in the n ext three months and another 1,200 could need Caesarean sections. These numbers are in addition to at leas t 280,000 women of childbearing age in the affected areas who will need quality health services in the coming months.

To help respond to this urgency, the UN agency is sending 252 emergency reproductive heal th kits that will provide equipment, medicines and supplies for safe deliveries, voluntary family p lanning, rape treatment and other services for 450,000 people for the next three months. 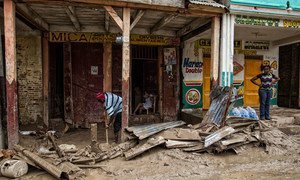 Hurricane Matthew’s destructive path through the Caribbean dealt a “major blow” to Haiti’s reconstruction effort and fight the against cholera, the United Nations humanitarian chief said this evening as the UN announced $5 million in emergency funds to kick-start assistance in the wake of the deadly storm, which has affected some 350,000 people on the tiny island.