MINUSTAH/Logan Abassi
UN peacekeepers in Haiti support the relocation of people ahead of the arrival of a tropical storm. (file 2010)

With the end of the UN’s peacekeeping presence in Haiti in sight, the UN’s human rights chief told the Security Council on Wednesday that the country now stands “at the crossroads between peacekeeping and development”, urging all concerned parties to continue building on progress made, or “risk losing it” altogether.

While encouraged by civil society’s engagement in promoting and protecting human rights, along with the victims of human rights violations, Michelle Bachelet acknowledged that “it has not been able to fully assumea monitoring and advocacy role.”

She noted that some civil society organizations continue to be targeted by acts of intimidation saying that it “must stop”, urging everyone with a stake in the Caribbean nation’s future, “to work together to strengthen the human rights protection system”.

Calling Haiti’s return to constitutional order, following presidential, legislative and local elections in 2017, “a significant achievement”, Ms. Bachelet added that standing “at the crossroads” between peacekeeping and development, “we must recognize the progress accomplished”, and “also continue building on it, or risk losing it”.

The High Commissioner encouraged the Council to provide Haitians with “the necessary support to strengthen institutions, fight against impunity and promote and protect human rights as a foundation to stability and development”.

She said that February’s protests - “the longest and most violent” in years, had “almost entirely paralysed the country”, despite significant improvements in the professionalism of the UN-supported National Police, incidents of serious human rights violations, including cases of summary executions, continue to be reported, with limited accountability.

“Perpetrators are consequently emboldened and silenced victims may develop grievances,” she added.  The weakness of the judicial system also has a negative impact on the prisons system she noted, with over 75 per cent of inmates estimated to be in a pre-trial detention — on average for 1,100 days — well over the limit set by national law.”

She also informed the Chamber that after the current Mission for Justice Support, MINUJUSTH concludes, her office intends to pursue its work in the country, and eventually, with the support of the Council and Member States, “a stand-alone presence”.

“We want to remain engaged and to support Haiti’s commitment to achieving democratic and economic development so that the rights of all people in Haiti are upheld”, stressed the High Commissioner.

As the second leg of the March-April “joint presidencies” of France and Germany continues, Security Council President and Germany’s Ambassador Christoph Heusgen, invited the UN peacekeeping chief to take the floor.

Jean Pierre Lacroix, pointed out that no violent demonstrations have occurred since “the ten days of unrest” from 7 to 15 February, when 41 people were killed, another 100 injured, and human rights largely abused.

The peacekeeping chief “strongly” condemned an armed attack just last week against the Chilean Ambassador’s convoy, while he visited the Croix de Bouquets NGO project just outside the capital, that left one dead and three injured but assured the Council that the National Police “continued to demonstrate its capacity to handle security threats in the country”.

“The strategic five-year development plan for the Haitian National Police for 2017-2021 is on track” he said, adding that his department supported “the desire of Haitian leaders to put an end to peacekeeping in Haiti and have the MINUJUSTH mandate end in October of this year”.

“Partnership between the UN and Haiti must evolve” and “remain strong and rooted in our ongoing commitment towards achieving democratic progress”, he concluded.

Loune Viaud, Executive Director of NGO Zanmi Lasante, Partners in Health's sister organization in Haiti and a recipient of a "Women of the Year" award from Ms. Magazine, also briefed the Council.

She spoke of gender-based violence and the lack of access to women’s health care as “one of the country’s greatest challenges to development”, encouraging the Council to view it as part of “reinforcing the relationship between sustainable development and peace and security”.

Moreover, Ms. Viaud urged the Council during the UN’s Mission reconfiguration, to support “the urgent humanitarian needs of women and girls”; and call for Haiti to create “greater legal protection” for them, including “a comprehensive law on gender-based violence”. 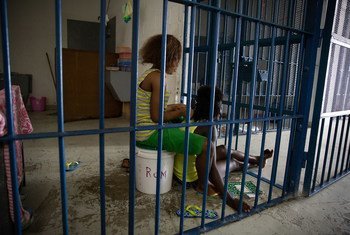