As part of its quick impact projects, the United Nations mission Haiti has inaugurated a new water supply system which is expected to provide for more than 13,800 people – more than half of whom are women – in parts of the country’s Central Department (Département du Centre), the mission said today.

“We are aware that this is not enough and that there is still much to do,” the Chief of Civil Affairs of the UN Stabilization Mission in Haiti (MINUSTAH), Pierre Ubalijoro, said in a recent news release.

“The task is great but the UN system will continue to support the Haitian Government and the Central Department to strengthen the system of supply of drinking water,” he added.

According to the UN Department of Peacekeeping Operations (DPKO), quick impact projects (QIPs) are small-scale, low-cost projects that are planned and implemented within a short timeframe. Different actors beyond peacekeeping also fund or implement QIPs with varying objectives. MINUSTAH has undertaken QIPs to support the country’s government in implementing projects to combat water-borne diseases, such as diarrhoea, typhoid fever and cholera.

Built at a cost of $95,000 – 95 per cent of which was funded by MINUSTAH – this latest project is centred on Nan Pwa, Madame-Cyr and nearby localities. It is expected to help ensure that need for clean water for drinking, cooking and hygiene is met even during rainy seasons, during which the usual sources of water are contaminated by sedimentary sludge. Some 250 local residents were also provided with temporary jobs during the construction of the system.

The water system, which includes some 5.5 kilometres of pipes and seven water distribution points, is also expected to alleviate the burden on the local population of having to travel long distances to fetch safe water.

The project has now been handed over to the country’s national agency for water supply and sanitation, called the Direction nationale de l’eau potable et de l’assainissement, which will look after the running of the system, providing services to the population and the plant’s maintenance. 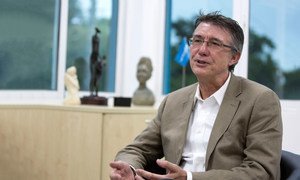