UNDP Niger
Voters line up at a polling station during the 21 February 2016 general elections in Niger.
28 July 2016

While welcoming recent political developments recently observed in West Africa, the United Nations Security Council today stressed the need to increase military cooperation between the States in the region and Sahel to fight against the terrorist group Boko Haram.

In a Presidential Statement approved by the body, the Council’s 15 members welcomed political developments including, the holding of elections "free and peaceful" in Niger, Benin and Cabo Verde. At the same time, they stressed the importance of ensuring the forthcoming elections in Ghana and Gambia are also "free, fair, peaceful, inclusive and credible."

The Council, however, expressed specific concern over recent political events in Guinea-Bissau and called on national actors "to respect the Constitution and the rule of law, while trying to find a political solution to the crisis."

Regarding the promotion of stability in West Africa and the Sahel in general, the Council welcomed the merger of the Office of the Special Envoy for the Sahel and the UN Office for West Africa (UNOWA). It also welcomed the increased cooperation between the new UN Office for West Africa and the Sahel (UNOWAS) and sub-regional and regional organizations, including the African Union (AU), the Community economic of West African States (ECOWAS), the group of five Sahel countries (G-5 Sahel), the Lake Chad basin Commission and the Mano River Union.

The Council 15 members “strongly condemned” all attacks perpetrated by the terrorist group Boko Haram, particularly in the Lake Chad Basin, and in Mali, Côte d’Ivoire, Burkina Faso and in the Sahel region.

However, they noted the progress made in the implementation of the Joint Multinational Force (FMM) and urged Member States participating in that Force to “improve cooperation and military coordination in the region,” to “refuse harbouring Boko Haram,” to “facilitate the restoration of the rule of law” in areas liberated form Boko Haram and to" allow humanitarian access."

Specifically, the Council reiterated its grave concern at the “dire humanitarian situation” caused by the activities of Boko Haram in the Lake Chad Basin area.

In this regard, the Council urged the international community to “immediately support the provision of urgent humanitarian assistance” to those most affected by the crisis in Cameroon, Niger, Nigeria and Chad, including by fulfilling the appeal for the Lake Chad Basin region launched by the UN. 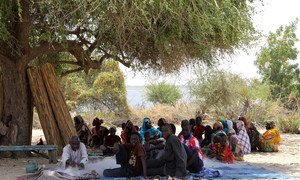 To bring an end to the Boko Haram threat in the Lake Chad Basin region, affected countries must address the root causes that contributed to the emergence of the group, including the social, economic and political grievances of marginalized communities, the top United Nations political affairs official said today.