Action must be taken now to halt alarming attacks against children and abductions - including of students - in parts of West and Central Africa, the head of the UN Children’s Fund, UNICEF, said in a statement on Wednesday.

Henrietta Fore, the agency’s Executive Director, said these incidents appear to be increasing in frequency, raising fears for the safety and wellbeing of children in the region.

It is not enough to condemn these crimes, not when millions of children face a worsening protection crisis.Children in these areas need concerted action to ensure that they can safely live, go to school or fetch water without fear of being attacked or taken from their families.

Her statement follows the kidnapping of some 140 students from a boarding school in Kaduna State, Nigeria, on Monday.

“We are deeply concerned that as in years past, non-State armed groups and parties to conflict in Burkina Faso, Cameroon, the Central African Republic, the Democratic Republic of the Congo (DRC), Niger and Nigeria will ramp up these violent activities over the coming weeks ahead of the rainy season when their movements could be restricted by flooding,” she said.

“Every effort must be made to reverse the spiraling protection crisis for children as the region is on the brink of catastrophe.”

Ms. Fore reported that in Burkina Faso, attacks against civilians, as well as other violations of international humanitarian law have “spiked significantly” in recent weeks.

At least 130 people were killed on Monday in an assault on a village in Yagha Province, which she said was the single deadliest attack in the country since violence broke out in 2015.

Additionally, 178 civilians there, including children, have been killed so far this month, while violence has displaced upwards of 1.2 million people, a ten-fold increase over three years.

The UNICEF chief listed more examples of attacks, abductions and other violations affecting children that have occurred in other countries in the region in recent months.

Ms. Fore stressed that it is not enough to just condemn these crimes, but to take concerted action so that children can live in safety.

“This starts with non-State armed groups and all parties to conflict who are committing violations of children’s rights – they have a moral and legal obligation to immediately cease attacks against civilians, and to respect and protect civilians and civilian objects during any military operations,” she said.

“They should also not impede but facilitate the efforts of UNICEF and other humanitarian actors on the ground working to reach vulnerable children.”

The international community also has an important role to play, she added, including by increasing donor contributions to humanitarian organizations so that they can expand their work to reduce children’s vulnerabilities and keep them safe.

These operations include creating safe temporary learning environments in areas where schools have closed due to insecurity, providing psychosocial support to children affected by violence, and supporting education on mine risk awareness. 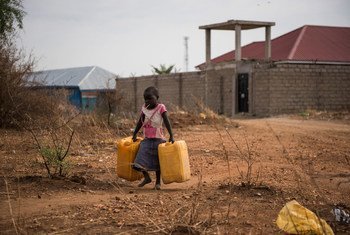 South Sudan: UNICEF warns of ‘desperation and hopelessness’ for children 10 years after independence

Ten years after South Sudan achieved independence, more children there are in urgent need of humanitarian assistance than ever before, the UN Children’s Fund, UNICEF, said on Tuesday.