The top official of the United Nations International Criminal Tribunal for the former Yugoslavia (ICTY) today updated the Security Council on the latest developments in his work, cautioning that while there have been positive developments in national war crimes justice and the Tribunal is on track to fulfil its mandate by the end of next year, the political situation in the region is not keeping pace.

“As my Office has reported, in recent years there have been many positive developments in national war crimes justice and regional cooperation. Unfortunately, the political situation throughout the region is moving in the opposite direction,” said ICTY Prosecutor Serge Brammertz, who also serves as the Prosecutor of the International Mechanism for Criminal Tribunals – the body that will oversee the residual functions of the ICTY, as well as for Rwanda (ICTR).

“Too many politicians and public figures are denying well-established truths, enflaming ethnic tensions and repeating nationalistic slogans of the past. What would have been difficult to imagine just a few years ago is sadly commonplace today. As a result, the positive trend in regional cooperation in war crimes justice appears to be reversing,” he added.

The prosecutor told the Security Council that during the reporting period, which covers 16 November 2015 to 15 May 2016, judgments were issued in three cases, bringing the ICTY closer to completing its mandate at the end of next year.

He said his office looked forward to the delivery of the appeal judgment in cases of Mico Stanišic and Stojan Župljanin – two high-level officials in Bosnian Serb structures – at the end of this month, and is continuing preparations for the appeal hearing in relation to the Jadranko Prlic case, which is anticipated next spring.

Work also continued in his office’s two final trials, Ratko Mladic and Goran Hadžic. In terms of Mr. Mladic, the defence is in the final phase of presenting its evidence, and it is anticipated that the final defence witness will be heard this month, and that closing arguments by both parties will be presented this fall.

In reference to Mr. Hadžic, the prosecutor said that three weeks ago his office had filed a motion for termination of the proceedings, having “no alternative but to take this step.”

“In this final phase of the Tribunal’s work, state cooperation remains essential to enable the completion of our mandate. This includes my Office’s access to documents, archives and witnesses in Bosnia and Herzegovina, Croatia and Serbia,” Mr. Brammertz said.

“My Office regrets that Serbia has turned away from the path of full cooperation with the Tribunal,” he added.

“This is unfortunately not the only reason for concern. It is troubling that Serbia has not yet appointed a new Chief War Crimes Prosecutor, despite having at least a year to do so. It is difficult to understand why this crucial position remains vacant,” he said.

In addition, Mr. Brammertz said that while his office welcomed the adoption of Serbia’s National Strategy for the Prosecution of War Crimes, the overall situation “raises legitimate doubts that there is real commitment to the goal of impartial accountability for war crimes.”

“The continued glorification of convicted war criminals in Serbia compounds those doubts. It is now up to Serbia to demonstrate that it will realize its pledges to cooperate with the Tribunal, support accountability for war crimes and promote effective regional cooperation,” he said.

Mr. Brammertz added that his office continues to monitor the cases referred to the national courts of France and Rwanda.

♦ Receive daily updates directly in your inbox - Subscribe here to a topic.
♦ Download the UN News app for your iOS or Android devices.
tribunal 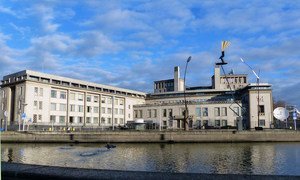 The long-serving Prosecutor of the United Nations tribunal for the former Yugoslavia today announced that he will appeal The Hague-based court's recent acquittal of Serbian politician Vojislav Šešelj on war crimes charges in connection with actions committed by Serbian forces between August 1991 and September 1993.