“Today is an historic day,” Mr. Ban told reporters at a press conference following the opening ceremony of the signing event. “This is by far the largest number of countries ever to sign an international agreement on a single day.”

According to the UN chief, the participation by so many countries and the attendance by so many world leaders leaves “no doubt” that the international community is determined to take climate action. He also welcomed the strong presence of the private sector and civil society, saying they are “crucial to realizing the great promise of the Paris Agreement.”

Adopted in Paris by the 196 Parties to the UN Framework Convention on Climate Change (UNFCCC) at a conference known as (COP21) last December, the Agreement’s objective is to limit global temperature rise to well below 2 degrees Celsius, and to strive for 1.5 degrees Celsius. It will enter into force 30 days after at least 55 countries, accounting for 55 per cent of global greenhouse gas emissions, deposit their instruments of ratification.

“If all the countries that have signed today take the next step at the national level and join the Agreement, the world will have met the requirement needed for the Paris Agreement to enter into force,” Mr. Ban highlighted, congratulating the 15 Parties that have already deposited their instruments for ratification.

Speaking alongside the Secretary-General, French President François Hollande applauded all those who made it possible to reach the second stage of the process – the signing of the document.

“I want to underscore that in Paris, it wasn’t just a single agreement that was brought about and needs to be ratified,” Mr. Hollande told the press. “In Paris, there were also four initiatives that were launched: the International Solar Energy Alliance, the development plan for renewable energy, the innovation mission with [United States] President Obama, and finally the high-level coalition to set a price for fossil fuels and coal.”

He insisted that France needs to be role model and set the example, not just because it was the place where the accord was reached, but because the country contributed to the solution.

“France should be an example to show that it wants to be the first – or one of the first – not just to ratify but also to implement the contents of the Agreement,” Mr. Hollande stated, noting that his country will increase its annual financing for climate from three to five billion euros per year between now and 2020. 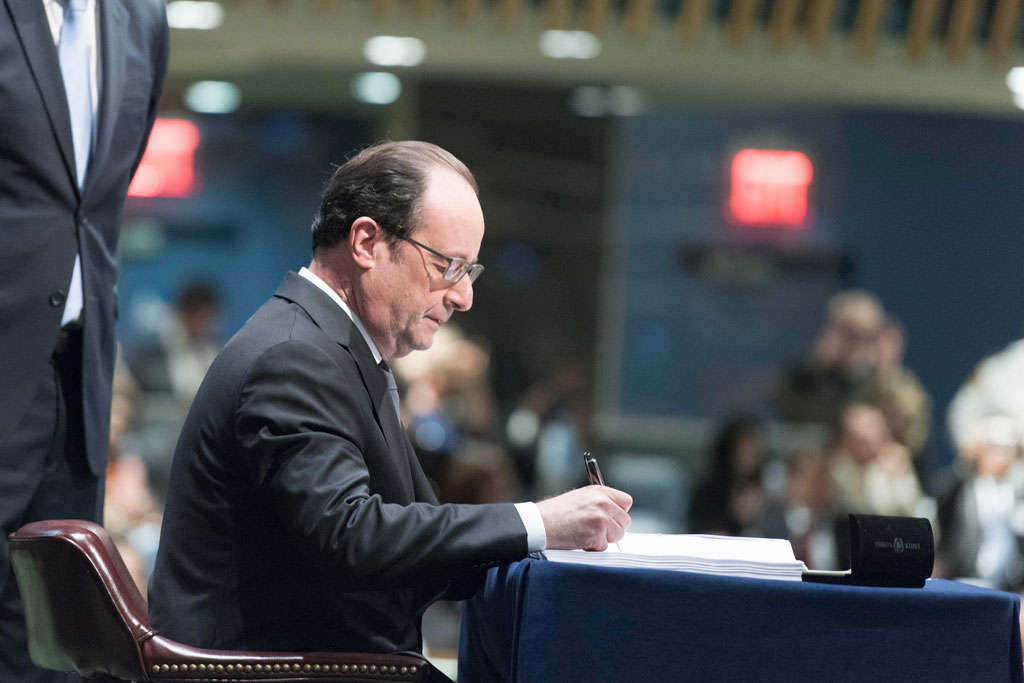 Meanwhile, in two weeks, the UN chief will co-host the Climate Action 2016 meeting in Washington D.C., which is expected to bring together leaders and experts from many fields, including government, business, civil society and academia, ahead of the next COP in Morocco in November.

Following the press conference, in remarks to an Informal High-Level event on promoting the early entry into force of the Agreement, Mr. Ban encouraged all countries to move forward quickly with their own domestic processes to accept and ratify the accord.

“As you are well aware, we need at least 55 countries and 55 per cent of greenhouse gas emissions. Having 55 per cent of greenhouse gas emissions may be a little bit shorter and easier if the United States and China […] ratify or join. Then it will add to almost 40 per cent. I call on the countries gathered here to use this opportunity to announce your timeline for joining the Agreement as soon as possible,” he said.

Mr. Ban said that it is imperative that strong political momentum continues to build, as the spirit of Paris is still continuing. “I will do all that I can this year to ensure that the Paris Agreement enters into force as soon as possible,” he said.

With their signatures of the landmark Paris climate accord, “governments made a covenant with the future,” Secretary-General Ban Ki-moon said at the end of a United Nations ceremony that saw the largest single-day turn-out for such an event, and which puts the world on a path towards low-carbon growth and a more sustainable future.