With their signatures of the landmark Paris climate accord, “governments made a covenant with the future,” Secretary-General Ban Ki-moon said at the end of a United Nations ceremony that saw the largest single-day turn-out for such an event, and which puts the world on a path towards low-carbon growth and a more sustainable future.

Yet, while today’s signing is a “vote of confidence” in a new approach to climate change, it is imperative that the strong political momentum continues to grow, the UN chief stressed, in concluding remarks to the day-long Ceremony for the Paris Agreement.

Indeed, if all of the countries signing today joined the Paris Agreement at the national level, the world will have met the legal requirement for the Agreement to enter into force – 55 countries accounting for 55 per cent of global greenhouse emissions. In particular, he was pleased to hear several large emitter countries announce that they will ratify in 2016.

“I encourage all countries to raise their level of ambition,” Mr. Ban said. “I urge world leaders to continue to provide direct political oversight and guidance. And I will look to civil society and the world’s young people to hold Governments to account for the promises they made today,” he added.

“When I look out at the horizon, I see, more clearly than ever, the outlines of a new and better world,” the UN chief said.

In that regard, Mr. Ban reminded Member States that the 2030 Agenda for Sustainable Development is a “major step forward” for people and the planet.

In addition, the World Humanitarian Summit he will be convening in Istanbul on 23 and 24 May will be a “critical opportunity” to enhance support to the most vulnerable and reaffirm “our common humanity,” Mr. Ban said.

“Let us continue to build on the historic progress of today – and move swiftly, with courage and determination, to usher in the new era we know can be ours,” he concluded.

The ceremony was opened this morning by a brass quintet from the Juilliard School in New York, which played Spring from Vivaldi’s Four Seasons.

Mr. Ban also introduced Getrude Clement, 16-year-old radio reporter from Tanzania and a UN Children’s Fund (UNICEF) youth climate mapper, who focused on why climate action is crucial for children. They, she said, would feel its effects most acutely. “We expect action, action on a big scale, and we expect action today, not tomorrow,” she emphasized. “The future is ours, and the future is bright.”

In his remarks, the UN chief also underscored that while it is good news that States are breaking records at the UN – records are also being broken outside. 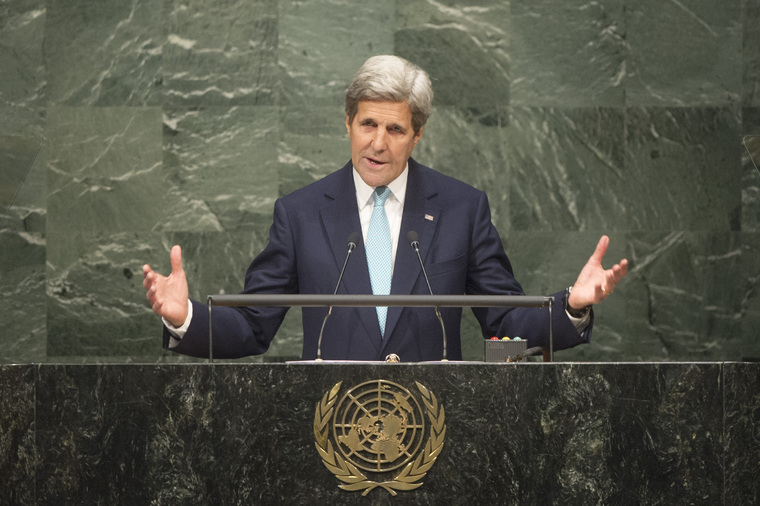 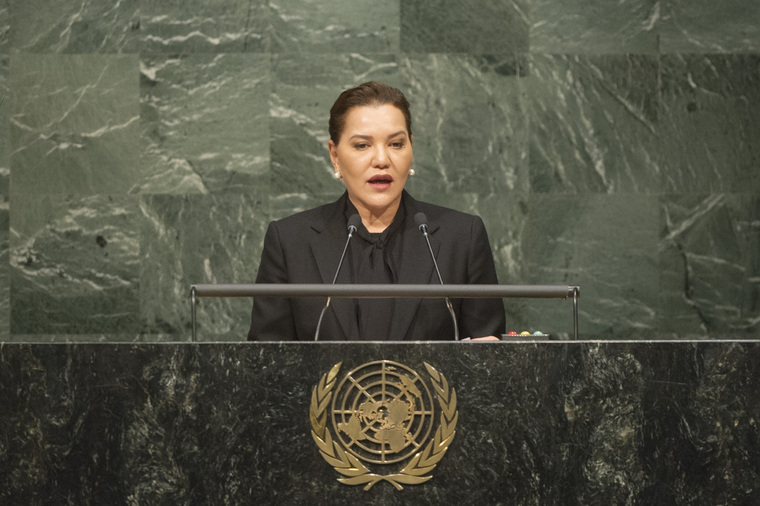 Princess Lalla Hasna of the Kingdom of Morocco addresses the opening segment of the signature ceremony. UN Photo/Rick Bajornas 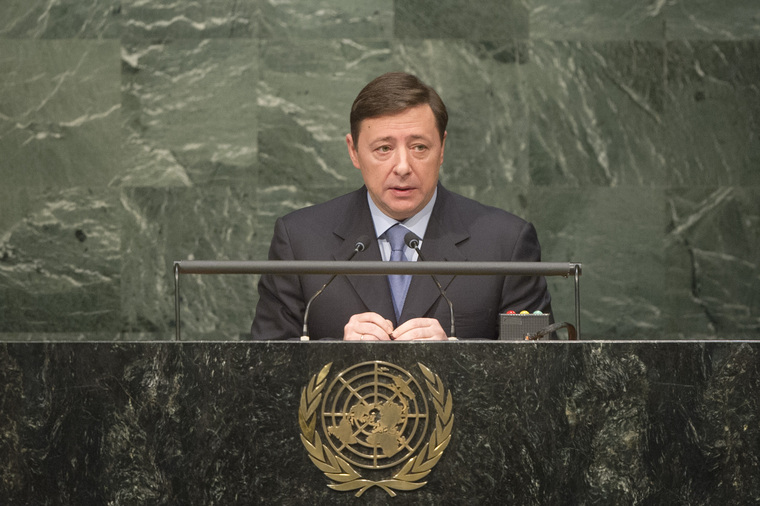 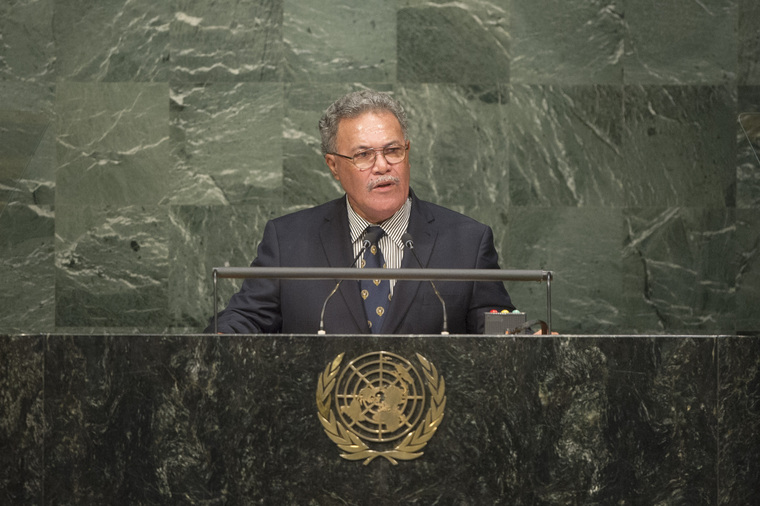 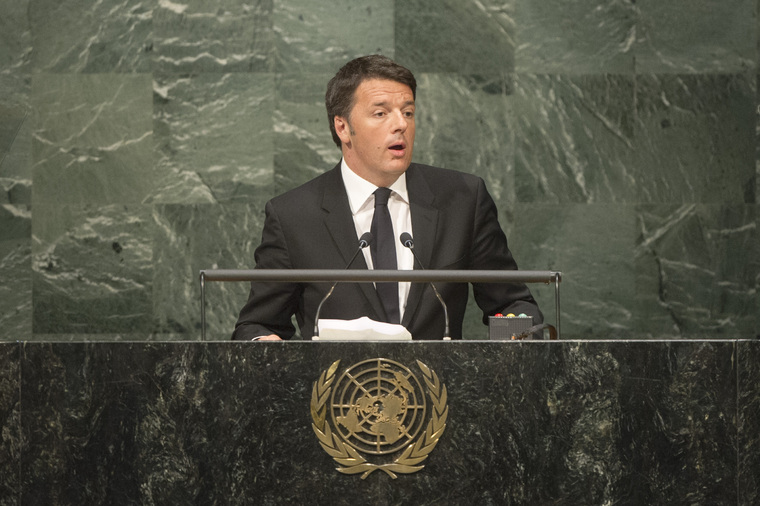 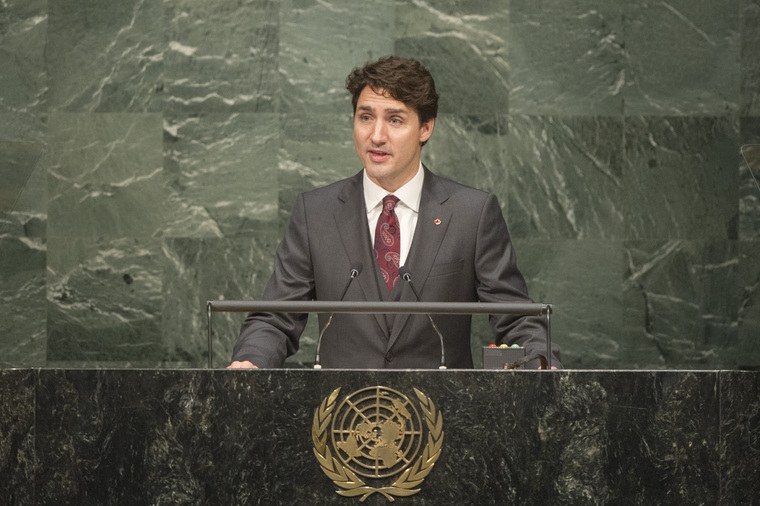 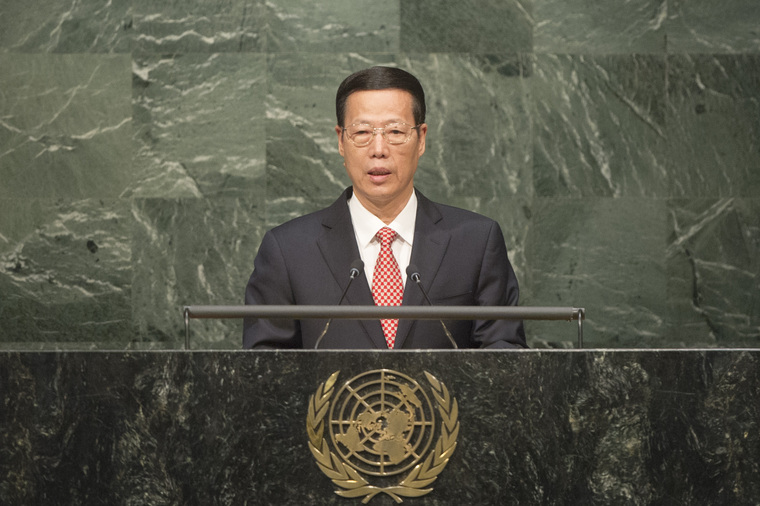 Zhang Gaoli, Special Envoy of the President and Vice Premier of the People's Republic of China, addresses the opening segment of the signature ceremony. UN Photo/Rick Bajornas 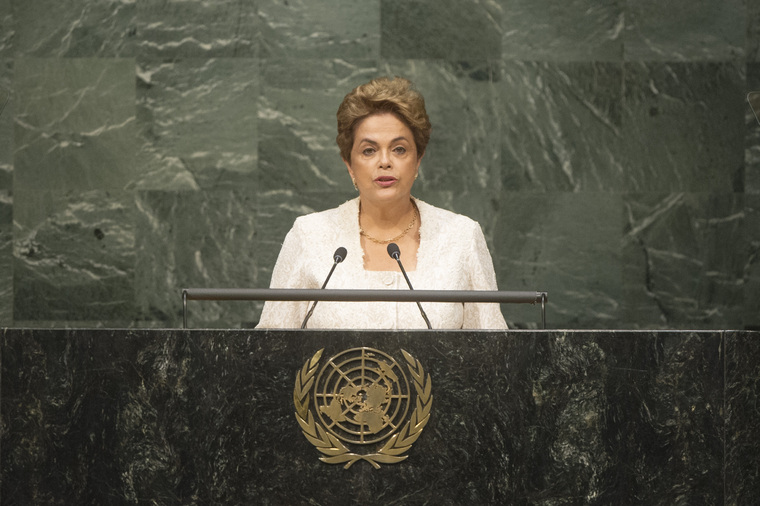 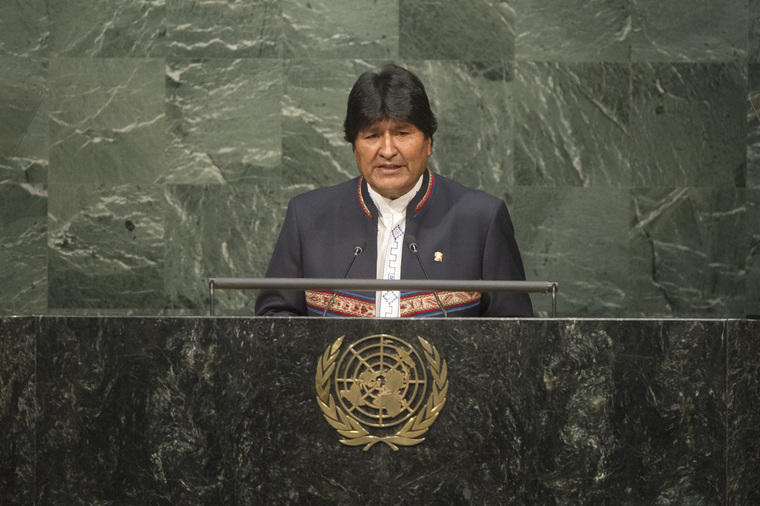 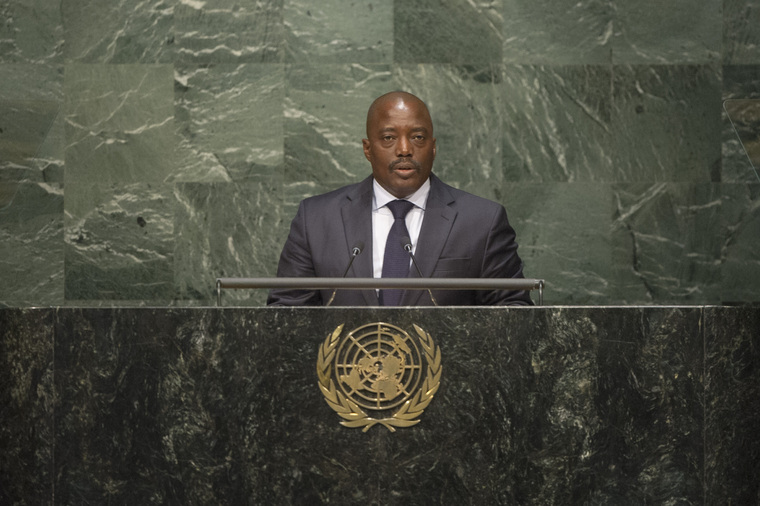 oseph Kabila Kabange, President of the Democratic Republic of the Congo, addresses the opening segment of the signature ceremony. UN Photo/Rick Bajornas 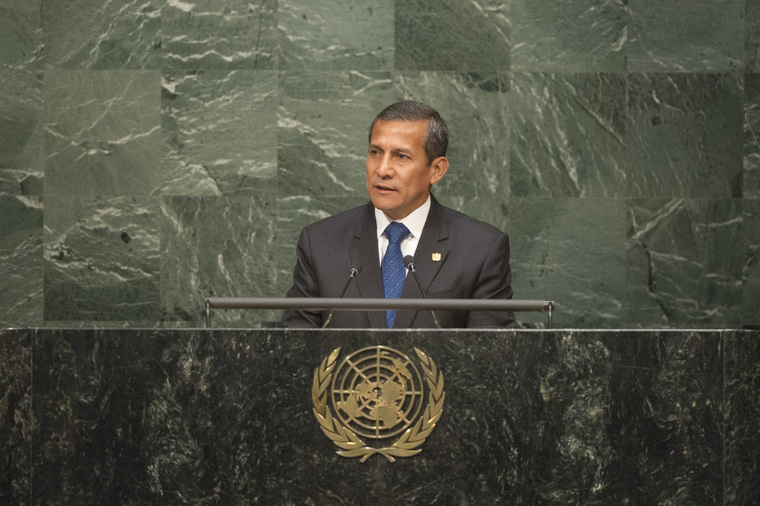 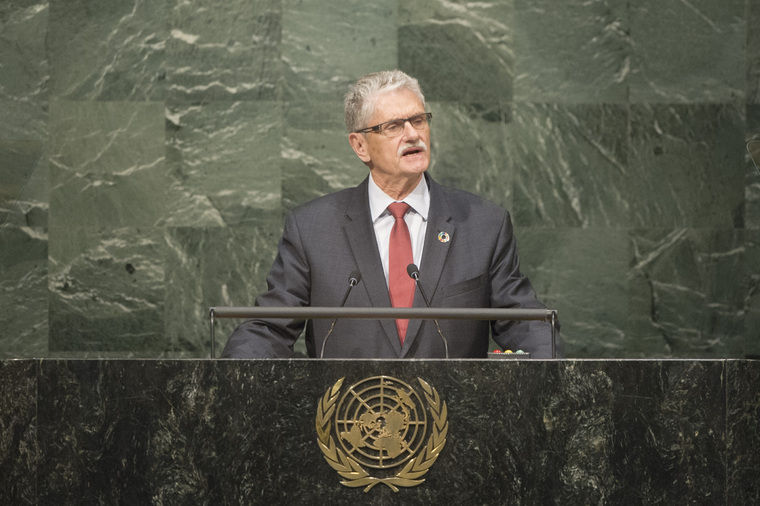 Mogens Lykketoft, President of the seventieth session of the General Assembly, addresses the opening segment of the signature ceremony. UN Photo/Rick Bajornas 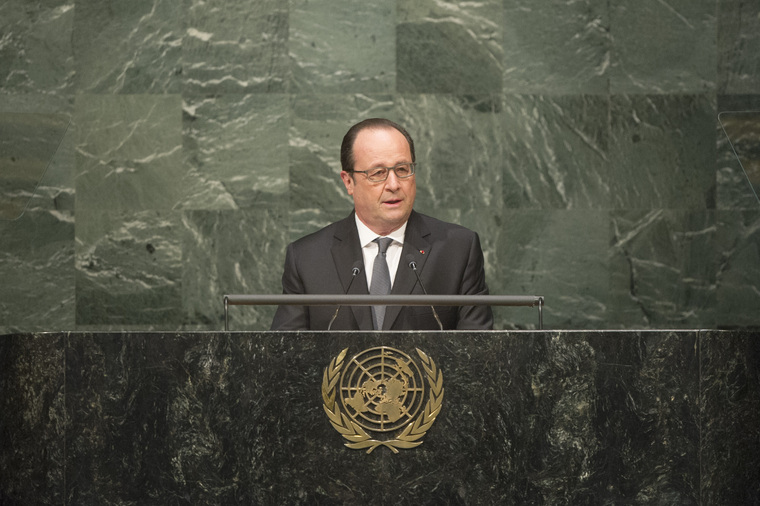 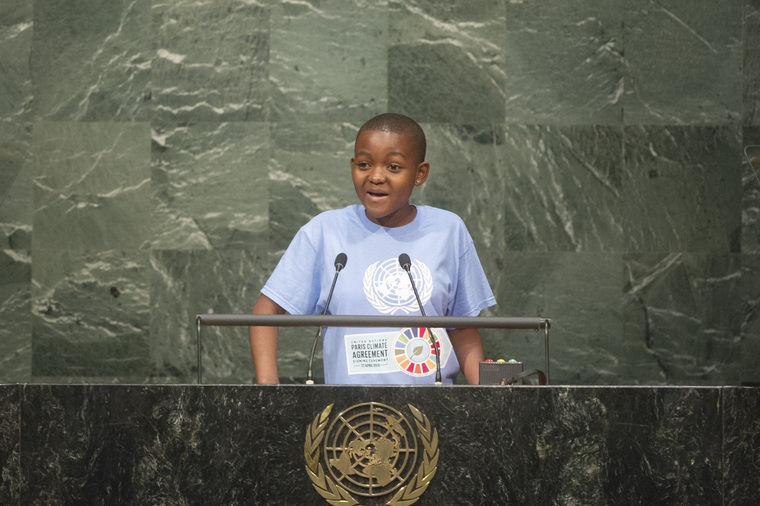 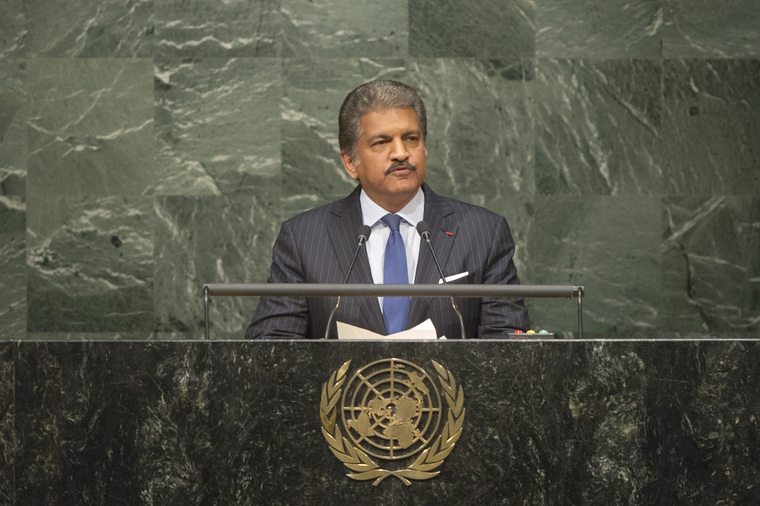 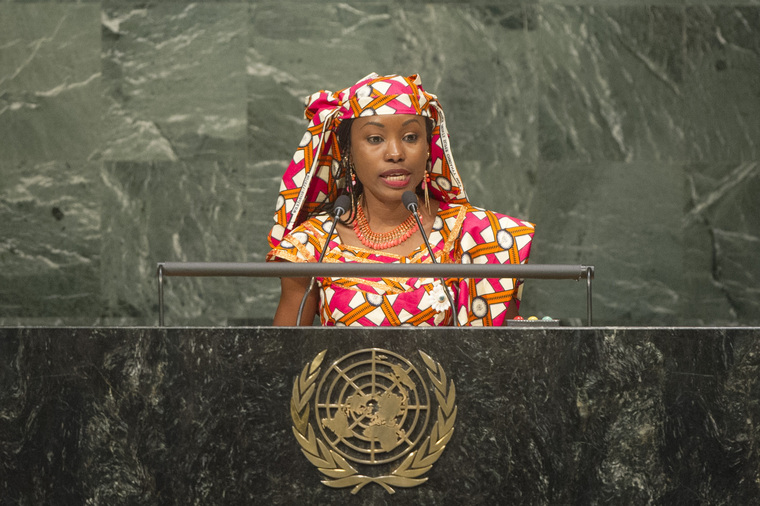 “Record global temperatures. Record ice loss. Record carbon levels in the atmosphere. We are in a race against time,” Mr. Ban stressed.

“The era of consumption without consequences is over. We must intensify efforts to decarbonize our economies. And we must support developing countries in making this transition. The poor and most vulnerable must not suffer further from a problem they did not create,” the Secretary-General said.

In that vein, the UN chief highlighted that climate action is essential to achieving the Sustainable Development Goals.

“Today is a day that I have worked toward since day one as Secretary-General of the United Nations and declared climate change to be my top priority. Today you are signing a new covenant with the future,” he said.

The covenant must amount to “more than promises,” Mr. Ban stressed, and find expression in actions taken today on behalf of the current generation and all future generations.

“It must find expression in actions we take today on behalf of this generation and all future generations – actions that reduce climate risk and protect communities, and actions that place us on a safer, smarter path,” the Secretary-General said.

Mr. Ban highlighted that participants would be joined at the morning’s events by 197 children, representing the Parties that have adopted the Paris Agreement.

“Of course, they represent more than this. These young people are our future. Our covenant is with them,” he said.

“Today is a day for our children and grandchildren and all generations to come. Together, let us turn the aspirations of Paris into action. As you show by the very act of signing today, the power to build a better world is in your hands,” Mr. Ban concluded.

Also speaking at the opening ceremony was General Assembly President Mogens Lykketoft, who congratulated Member States, civil society and business leaders for “keeping the pressure on” and taking initiatives to “keep the momentum going.”

“This is a moment of great hope,” Mr. Lykketoft stressed.

“We must raise the level of ambition even further. We must take urgent and bold steps to make this transformation happen,” he added.

Today’s event coincides with International Mother Earth Day, and in his message on the Day, Mr. Ban said that the Paris accord, in conjunction with the 2030 Agenda for Sustainable Development, holds the power to transform our world.

The Paris Agreement was adopted by all 196 Parties to the UN Framework Convention on Climate Change (UNFCCC) at the UN Climate Change Conference in Paris on 12 December 2015, widely known as COP 21. In the Agreement, all countries agreed to work to limit global temperature rise to well below 2 degrees Celsius, and to strive for 1.5 degrees Celsius.

François Hollande, President of France, host of COP 21, recalled the spirit of solidarity expressed at the conference and stressed that the terrorist attacks on Paris had been the backdrop to the Agreement. World leaders had nevertheless demonstrated their ability to come together with a sense of partnership and responsibility to ensure that an agreement would be the fruit of the Paris meeting, as a symbolic act for the rest of the world.

President François Hollande of France addresses the opening segment of the signature ceremony for the Paris Agreement on Climate Change. UN Photo/Rick Bajornas

Never in the history of the United Nations had it been possible to bring together 170 countries to sign an agreement, all together, on one day, he noted, emphasizing that there is no turning back now. The world must accelerate action to implement low-carbon policies.

Noting that some $100 billion is needed between now and 2020, he said every country must set an example, particularly developed countries, by stepping up contributions for combating climate change. “It is not just a question of States taking action, the entire world must come together,” he stressed. “Everyone must feel that they have a stake in this.”

Also addressing the ceremony, Academy Award-winning actor Leonardo DiCaprio said that as a UN Messenger of Peace, he had been travelling all over the world for the last two years, documenting how this crisis is changing the natural balance of our planet. He has seen cities like Beijing choked by industrial pollution; ancient boreal forests in Canada that have been clearcut; rainforests in Indonesia that have been incinerated; and unprecedented droughts in California.

“All that I have seen and learned on this journey has terrified me […] I do not need to throw statistics at you. You know them better than I do, and more importantly, you know what will happen if this scourge is left unchecked,” he told the delegates, adding: “Now think about the shame that each of us will carry when our children and grandchildren look back and realize that we had the means of stopping this devastation, but simply lacked the political will to do so.”

Indeed, Mr. DiCaprio continued, the historic signing of the Paris Agreement is reason for hope, but evidence shows that will not be enough. “Our planet cannot be saved unless we leave fossil fuels in the ground where they belong. An upheaval and massive change is required now – one that leads to a new collective consciousness. A new collective evolution of the human race inspired and enabled by a sense of urgency from all of you,” he said.

So, after 21 years of debates and conferences “it is time to declare no more talk. No more excuses. No more 10-year studies. No more allowing the fossil fuel companies to manipulate and dictate the science and policies that affect our future. This is the only body that can do what is needed. You, sitting in this very hall. The world is now watching. You will either be lauded by future generations, or vilified by them.”

Among the UN officials reacting to today’s events, Oh Joon, President of the UN Economic and Social Council (ECOSOC) said: "With today's historic signing of the Paris agreement, there is no going back on our commitment to combat climate change. Now is the time for taking action to shape a sustainable future for all."