UN Photo/John Isaac
A Muslim grieving over his son’s grave in Vitez, Bosnia and Herzegovina. Only two cases have been recognized as genocide by international courts: Rwanda (1994) and Srebrenica (Bosnia & Herzegovina, 1995).
28 January 2016

The United Nations ‘Human Rights up Front’ initiative, which seeks to strengthen the preventive work of the UN to recognize the value of early warning signals of crises to come, is more vital than ever as the world is facing ever more grave and complex challenges, Deputy Secretary-General Jan Eliasson has told the General Assembly.

“When we look around us today, we see the urgent, even desperate, need to react early and to take effective action before situations get out of control, leading to immense human suffering,” he told the 193-member body yesterday.

“If there was ever a time to strengthen United Nations prevention work, it is now. With the Human Rights up Front initiative and process, we have a tool in our hand, which can make a difference in the lives of millions of people. It can strengthen a dimension of the UN, which can and should inspire confidence and much-needed hope for the future in today’s troubled world.”

The initiative was launched by Secretary General Ban-Ki moon in December 2013 to address the ‘systemic failure’ identified by an Internal Review Panel in meeting UN responsibilities to prevent and respond to serious violations of human rights and humanitarian law.

Human Rights up Front aims to help the UN act more coherently across the pillars of the Organization’s work – peace and security, development, and human rights – by achieving three types of change. It seeks cultural change to make sure that UN staff understand their prevention responsibilities and pursue them, operational change to ensure that the UN works on the basis of shared analysis, and enhanced engagement with Member States.

“Human Rights up Front is about improving how the UN system functions and how staff members are to perform,” Mr. Eliasson stressed. “It does not directly address the role of Member States in prevention. But I would hope that Member States will identify elements of the initiative, which they can usefully adopt in their national efforts.

“Member States – in the General Assembly, the Security Council as well as in ECOSOC (UN Economic and Social Council) – have an important role to play in promoting the approaches and changes, which Human Rights up Front seeks to achieve. We count on you to not least provide political support for preventive action,” he said. 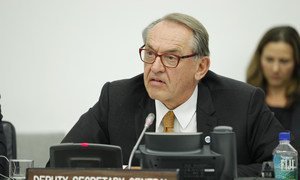 Still haunted by its failure to forestall genocide in Rwanda and Srebrenica nearly 20 years ago and confronted by ongoing bloodshed in Syria and the Central African Republic (CAR), the United Nations is revamping its preventive strategies under a new initiative called ‘Rights up Front.’