Still haunted by its failure to forestall genocide in Rwanda and Srebrenica nearly 20 years ago and confronted by ongoing bloodshed in Syria and the Central African Republic (CAR), the United Nations is revamping its preventive strategies under a new initiative called ‘Rights up Front.’

“The need for early action, and the crucial role of responding early to human rights violations, is at the heart of the ‘Rights up Front’ initiative,” Deputy Secretary-General Jan Eliasson told an informal session of the General Assembly yesterday as he presented a six-point action plan.

It includes training UN staff on the world body’s core purpose of promoting respect for human rights; providing Member States with the information needed to respond to human rights violations; and ensuring that UN personnel around the world are more attuned to situations where there is a risk of serious human rights abuses and are equipped for the responsibilities that such potential crises entail.

The strategy, initiated by Secretary-General Ban Ki-moon, also includes achieving a more coherence by strengthening engagement with the General Assembly, the Security Council and the Geneva-based UN Human Rights Council and providing earlier and more coherent support to teams on the ground before a crisis emerges; and better organization of human rights staff so that they can identify risks of serious violations of human rights that could lead to atrocities.

Finally, underpinning all these activities will be better information management on threats and risks to populations for planning operational activities and for sharing with Member States.

“A lack of broad and timely political support has been a key obstacle to early and effective action to prevent human rights crises,” Mr. Eliasson said. “Together with Member States we will need to explore ways of strengthening our collective political will to react and act when crises are unfolding. It is irrefutable, and needs repeating, that serious human rights violations are the best early warning of impending atrocities.

“If we fail to act early, the human, political and economic costs can be devastating as we know far too well. This calls for a more alert, flexible and coordinated UN System, both on the ground and at headquarters. This is what the ‘Rights up Front’ initiative aims to accomplish.”

He stressed how the UN System failed to prevent genocide in Rwanda, where at least 800,000 ethnic Tutsis and politically moderate Hutus were killed during a span of three months in 1994, and in Srebrenica, where at least 6,000 Muslim men and boys in a UN protection zone were massacred in 1995 during the wars in former Yugoslavia.

“Those horrendous events led us all to say ‘never again’,” Mr. Eliasson said. “We said we would have to do more to prevent serious violations of international human rights and humanitarian law. Despite much effort, since 1995 hundreds of thousands of people have died as a result of mass atrocities and tens of millions have been displaced.”

But steps forward have been taken. “World leaders endorsed the ‘responsibility to protect in 2005. And Member States have over the years articulated an increasingly detailed agenda for the protection of civilians,” he said.

Yet, the crises in Syria, where over 100,000 people have now been killed and 8 million driven from their homes in the nearly three-year civil war, and in CAR, where thousands have been killed and over 600,000 displaced in a conflict increasingly marked by inter-communal clashes between Christians and Muslims, are reminders that serious human rights abuses are often the clearest early warning of emerging conflict, he added.

“When people in today’s world are at risk or subject to serious violations, they expect and request the United Nations to act - and we do,” Mr. Eliasson declared. “However, in practice, our response to crisis often comes when a situation has deteriorated to the point where only a substantial political or peacekeeping mission can deal with the problems.” 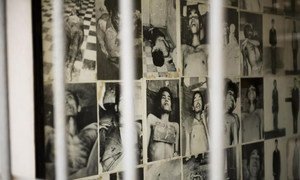 Top United Nations officials joined international experts today in New York to mark the 65th anniversary of the Convention on the Prevention and Punishment of the Crime of Genocide – referred to as a living symbol of the pledge of 'never again.'